(RNS) In an attempt to create unity, World Vision managed to poke a hornet’s nest around the issue of same-sex marriage. President Rich Stearns openly acknowledges the mistakes the relief organization made while flip-flopping on the issue.

On Monday (March 24), the World Vision announced that it would allow employees to be in same-sex marriages. Within 48 hours, the $1 billion Christian organization reversed course, saying that it had made a mistake. The backlash illustrated how evangelicals will continue to wrestle with a growing cultural acceptance of same-sex marriage.

In an interview with Religion News Service on Thursday, Stearns suggested that the number of sponsors lost was under but around 5,000. Those who sponsor a child pay $35 each month, so the loss could have tallied up to $2.1 million a year.

Q: What has been the reaction since the reversal?

A: This has been a painful week in terms of the division that we created around our initial decision, and then reversing the decision two days later has created a lot of concerns with our employees and our key partners around the country.

Q: Can you say how many child sponsors have been lost?

A: I don’t actually have today’s number but it’s less than 5,000 so far. We’re learning that a number of people are calling back since the reversal to reinstate their sponsorship. They’re forgiving; they’re saying, ‘Hey we stand with you.’”

Q: What about nonreligious partners? Have you lost any partnerships with them since the reversal of the decision?

A: Not that I’m aware of at this point. We’re still obviously evaluating the impact of all of this on all of our partners. The important thing for World Vision is that every organization has to clearly define who they are and what they stand for. And we’ve done a pretty good job of that for 63 years, and this week has unfortunately caused a lot of confusion and dissonance across the country, certainly with our closest partners and sponsors, pastors and churches, some who have been with us for decades. The mistake I think we made was to confuse those folks about where we stood on what we feel and they feel on certain issues, certainly the issue of traditional marriage. 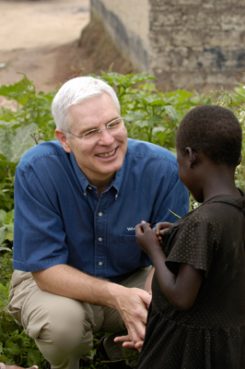 Q: Someone said you had tears in your eyes in this morning’s staff meeting. How has it impacted you personally?

A: I’ve had better weeks, I’ll tell you that. This has been emotionally difficult for all of us at World Vision. I feel responsibility. I’m the leader. I led us into this situation. I’ve made some mistakes and I have to live with that. But I think some of the emotion is about how we are so proud of what we stand for, we are so proud of what we’ve done, all the good work we do with refugee camps in Syria, rebuilding the Philippines after the typhoon, and work in the Congo. All of those things have been taken off the table and out of the discussion because of the controversy around this recent decision. If I have any heartache, I hope and pray that it doesn’t impact the amazing staff and work we do around the world.

Q: Has anybody called for your resignation, on the board or elsewhere?

A: If you read the Internet, there are people that are calling for the resignation of me, the board and anybody else who wears a World Vision T-shirt. No, there have been no serious requests for my resignation. I would certainly understand if the board wanted to make a decision around that. Some of the board members have asked the question about their own resignation. Right now, our feeling is we were all in this together. We made certainly, in retrospect, a bad decision, but we did it with the right motivations. We weren’t trying to harm, or trying to find revenue; we weren’t doing it for wrong motives. We were trying to find some kind of solution to a divisive issue that would create some space of togetherness around differences within the church. Our regret is that we caused more division instead of finding a place of more unity.

Q: Have any staff members resigned?

A: We have had one or two resign that I’m aware of, but not a large number.

Q: Was that earlier this week?

A: I believe at least one resigned earlier when they learned about the decision. We had a few in the past few days resign partially because of stress. You can imagine some of the folks in our call center that are answering our 800 line. They’re receiving an earful of anger. I think we had a few people who couldn’t handle the stress and the anxiety created by the incoming calls.

Q: What about since the reversal? Has anyone left?

A: Not that I’m aware of. Within an hour of the reversal, the call volume dropped. The angry calls stopped and dropped to a much lower level. Some of the sponsors called back to reinstate their sponsorships.

Q: Did anyone come out in the time between the announced decision and the reversal? In other words, are there any employees in same-sex marriages currently?

A: As far as we know, we don’t have any World Vision U.S. employees involved in a same-sex marriage. With a population of 1,100 employees, I’m sure we have people with a same-sex orientation on our staff. But I think it’s important to say that we respect the privacy of our employees. We don’t ask about sexual orientation in the interview or in hiring because we do welcome people regardless of their sexual orientation if they can affirm the Apostles’ Creed and the statement of faith, and if they can abide by our conduct policy. The conduct policy applies to heterosexuals and homosexuals. We’re not trying to exclude someone because they have a same-sex orientation, but we do have a conduct standard that governs all employees.

Q: Do you have employees or members of the board who are worried about being perceived as anti-gay?

A: Certainly that would be a concern. I certainly don’t want to send a message to the gay community that we are anti-gay. We are not. We are pro-people. We believe that all people are created in the image of God and are to be treated with love and respect. That’s the foundation for our work around the world. We work with all people. We don’t discriminate based on religion. We work with Muslims and Hindus and Buddhists and Christians and animists. We don’t discriminate racially, ethnically or religiously. We would not want people to think we have negative attitudes towards people with same-sex orientation.

Q: What kind of church do you attend, and has that informed your personal view on same-sex marriage?

A: It’s a Presbyterian Church (USA) in the Seattle area, but I don’t want to drag them into this. I’m not telling people where I stand on same-sex marriage because I don’t think it’s relevant. The decision the board made is about what World Vision should do strictly around our code of conduct. We saw it as a narrow issue and we have board members who have our own opinions and go to various denominations and churches.

World Vision has been aware that this issue has been dividing churches, denominations and families in a heartbreaking way. Our board was trying to make an honest attempt to wrestle with a divisive issue. We created more disunity by our action and we blurred the image of World Vision in the eyes of our supporters and church partners, so we took steps to rectify that and be quite clear in where we stand.

Q: In The New York Times, Nicholas Kristof wrote about you: “Mr. Stearns argues that evangelicals were often so focused on sexual morality and a personal relationship with God that they ignored the needy.” Do you still feel this way when it comes to an evangelical focus on sexual morality?

A: I’m not suggesting at all that marriage or sexuality is a trivial issue for a Christian or for the church. They’re important issues around conduct and the authority of Scripture in our lives. What I do feel is there is a tremendous amount of energy going into these issues from within the church, and certainly because of who we are at World Vision, we see that the issues of poverty and suffering and caring for the least of these around the world, these issues sometimes seem less important than these issues of policy and sexual morality in the United States. I’m not trying to equate the two, but to say we should certainly be as passionate about serving the poor as we are about issues of sexual morality in the United States. In many churches, that is the case. But we all have to admit that issues like this distract us and take up more time than they should or than they ought to.