(RNS) Nearly two years ago, Chick-fil-A CEO Dan T. Cathy caused a backlash when he said he supported marriage between a man and a woman. Gay groups announced boycotts, and Christian consumers rallied around the fast-food chain’s chicken sandwiches.

In a recent interview, however, Cathy said that while he still holds the same position, he regrets “making the company a symbol in the marriage debate.”

Similarly, when Phil Robertson was suspended from his popular reality TV show “Duck Dynasty” for making controversial comments about homosexuality to GQ magazine, gay groups cheered the decision as evangelical fans swamped the A&E network with complaints. Within a week, Robertson was reinstated.

So it was much the same this week when the evangelical relief group World Vision announced that it would allow employees who are in same-sex marriages. Within 48 hours, the $1 billion Christian organization reversed course, saying on Wednesday that it had made a mistake.

The World Vision flip-flop reflects the struggle within evangelicalism over how to respond to a growing cultural, legal and even religious acceptance of homosexuality, particularly same-sex marriage.

Like other evangelical institutions and businesses, World Vision is facing a catch-22. At stake is not only the financial bottom line, but also issues of reputation and social acceptability. Caught in the middle are rank-and-file evangelicals, particularly younger Christians who are trying to come to grips with a rapidly changing culture.

The flip-flop has created a mess for World Vision, with observers suggesting that the organization could lose confidence from its conservative evangelical base while raising the hackles of same-sex marriage supporters. Beyond the issue of homosexuality, the dust-up could threaten the agency’s ability to attract supporters from all sides on issues such as  global poverty and sex trafficking.

While World Vision may be the latest evangelical institution to get caught up in the culture wars, it won’t be the last, and the pressures facing its board are likely to affect others: 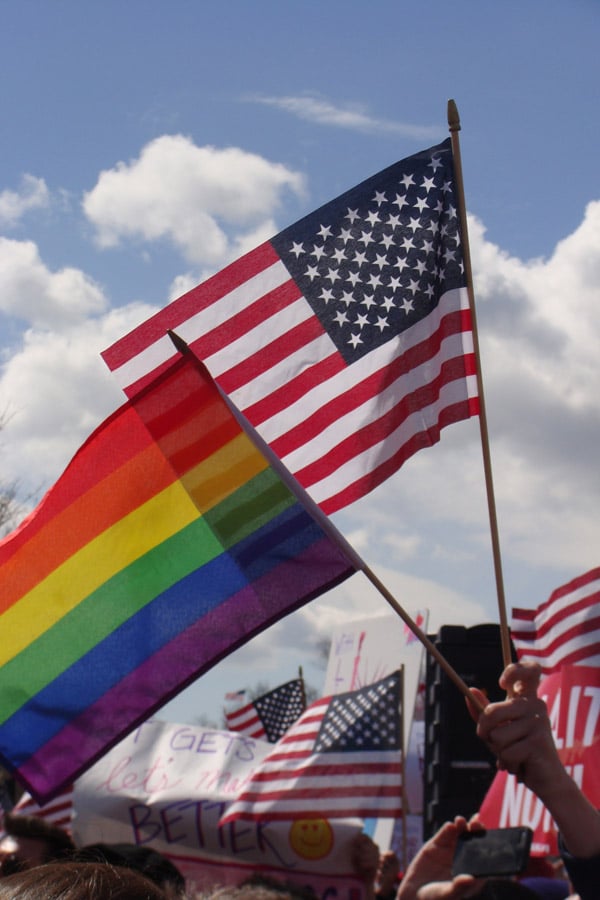 (RNS) Supporters of gay marriage rallied outside the U.S. Supreme Court on March 27, 2013, as the court heard a challenge to the Defense of Marriage Act. RNS photo by Kevin Eckstrom.

Seventeen states have now legalized same-sex marriage, including World Vision’s home state of Washington. In the wake of those changes, organizations across the country are trying to figure out how, or if, to adapt to those new laws. Part of what confounded supporters was that World Vision was under no immediate pressure to make the change, in Washington state or elsewhere.

World Vision President Rich Stearns admitted as much in an interview with Christianity Today magazine.

“There is no lawsuit threatening us,” Stearns said. “There is no employee group lobbying us. This is simply a decision about whether or not you are eligible for employment at World Vision U.S., based on this single issue, and nothing more.”

The initial policy change had the potential to result in enormous financial loss from many evangelical leaders; the Assemblies of God, a large Pentecostal denomination, urged its members to drop support. By the time the policy was overturned, the agency reportedly saw a loss of 2,000 child sponsorships — an initial drop of at least $840,000 per year.

While significant, donor support was likely not a factor in the initial decision to change policy. A drop in support from World Vision’s evangelical base likely outweighed any possible income it could recoup from new donors who might support a policy change.

For groups like World Vision, even though the culture may be shifting, the grass roots aren’t. In 2001, Americans overall opposed same-sex marriage by  57 percent to 35 percent, according to the Pew Research Center. By 2014, however, the figures had nearly flipped — 54 percent of Americans now support same-sex marriage, compared with 39 percent who oppose it.

Not so for evangelicals, however. “Despite a modest increase over the past decade, white evangelical Protestants are the main exception to the more recent trend of growing support for same-sex marriage,” Pew Research Center’s Fact Tank wrote earlier this month. “The new poll found that 23 percent of this group supports same-sex marriage, the same share as last year.”

Research on evangelicals suggest that younger evangelicals are more likely to support same-sex marriage than those of an older generation.

In 2012, Pew found that 29 percent of young white evangelicals (age 18-29) expressed support for allowing gays and lesbians to marry legally, higher than older evangelicals at 17 percent. But it was far below the level of support for same-sex marriage expressed by young adults as a whole (65%).

“Nearly half of of practicing Protestants under 40 today support changing laws to enable more freedoms for the LGBTQ community, while just one-third of their parents’ and grandparents’ generation feel the same,” writes Barna Research.

While World Vision’s base has always been strongest among evangelicals, it does count employees and support from churches that now allow same-sex marriage, such as the United Church of Christ and the Episcopal Church.

“World Vision has been extremely broad in terms of church relations, but they have an evangelical base,” said David Neff, retired editor-in-chief of Christianity Today. “They were trying to figure out how to keep that broad base as things are changing. It was clearly a poorly timed misstep.”

World Vision may have gone back to the status quo, but the larger issue of how religious institutions will handle a growing acceptance of same-sex marriage will not go away. If anything, this is just the beginning.

News
In Haiti, a crisis of violence, chaos, and cholera goes largely ignored by outside world
Follow us on Facebook!
Submit your photos to RNS