PHILADELPHIA (RNS) No one is certain why renowned painter Thomas Eakins liked riding his bike to St. Charles Borromeo Seminary in the early 1900s.

Was the Quaker-born painter, considered among the most important artists in American art history, searching for answers to life’s big questions at the Roman Catholic seminary?

Did the liturgical richness suit his artistic temperament as a finely detailed realist painter?

Did the academic atmosphere feed his intellectual curiosity?

Over the course of his visits, Eakins painted the portraits of 14 Catholic priests, which he gave to the subjects as gifts. Five of his portraits eventually hung on campus in the seminary’s Eakins Room: the Rt. Rev. James F. Loughlin (1902), the Rev. James P. Turner (1900), James A. Flaherty (1903),  Dr. Patrick Garvey (1902) and Archbishop James Frederick Wood (1877).

Today, the only sign of the great painter is the “Eakins Room” nameplate over the door. As part of a dramatic plan to consolidate the seminary’s assets and focus on its educational mission, the paintings were put up for sale last month with Christie’s auction house.

“We have hundreds of thousands of square feet of empty space,” said Bishop Timothy C. Senior, the seminary’s rector, explaining the sell-off of half the huge campus and the renovation of the other half to accommodate, ultimately, 200 students.

The Eakins paintings were “low-hanging fruit,” said the bishop. “This is not Michelangelo’s ‘David,’ let alone his ‘Pieta.’ They’re a wonderful part of our heritage but I can’t imagine the men depicted in the portraits, if they were here today, would disagree with me at this point.”

It’s not the first time Philadelphia has faced moments like this.

In 2007, Jefferson Medical College put up for sale Eakins’ 8-foot-by-6-foot “Gross Clinic.” The 1875 painting, considered by many to be his masterpiece, depicts renowned Philadelphia surgeon Samuel D. Gross presiding over an operation to remove part of a diseased bone from a patient’s thigh.

The work sold for $68 million, and in a Solomon-esque solution it is shared by the Philadelphia Museum of Art and the Pennsylvania Academy of the Fine Arts, where Eakins studied and taught.

A vicious battle raged, too, when civic, political and philanthropic leaders wrested the famed Barnes Foundation’s collection of impressionist art from its birth home in suburban Merion to its fancy new digs in Center City Philadelphia. 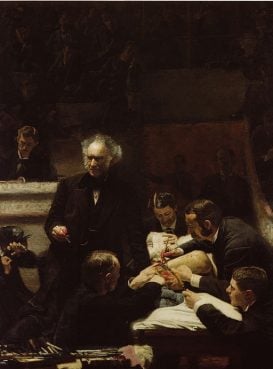 The Pennsylvania Academy of the Fine Arts might seem a natural space for Eakins’ seminary collection, but it “is not in a position to purchase them,” said David Brigham, its president and CEO. The Philadelphia Museum of Art, which would not comment, has reportedly declined as well.

No one expects the seminary paintings to approach the $68 million paid for “The Gross Clinic,” and officials from the seminary, Christie’s and the Philadelphia art world would not estimate their value. Christie’s did sell two Eakins portraits, for $122,500 and $338,500 respectively, in 2009, according to spokeswoman Elizabeth Van Bergen.

The collection may sell as a whole, or be broken up into two or more groups. The paintings will be put up for private sale, which, unlike a public auction, could allow time for interested museums to line up funding.

To budget-strapped institutions and private owners, selling off art and artifacts sometimes seems the answer in an era of declining revenues and sagging fortunes. Consider the late Martin Luther King Jr.’s family, now locked in a court fight over whether his Nobel Peace Prize medal and his Bible can be sold by the estate.

And last month, a letter King wrote to the late civil rights activist Rosa Parks went up for sale, reportedly put on the market by the Parks family.

The 180-year-old St. Charles Borromeo Seminary has seen enrollment decline to 137 students, down from a high of 576 in 1964. Its high-maintenance 75-acre campus is fraying and the site seems even more dated in a church now guided by the less gilded — Jesuit Pope Francis and Franciscan Archbishop Charles Chaput. Today, the accoutrements of 20th-century Catholicism seem like baggage.

But while no one wants to sell art to underwrite maintenance — to fix the gutters, so to speak — not everyone sees it as an omen of institutional decline, either.

There’s an argument that more people will be able to view the work if it’s in a public location. Few made the pilgrimage to Jefferson Medical College to see “The Gross Clinic” in its first home, while millions have visited the museums sharing joint custody of the painting.

Michael Finnegan, president of the American Catholic Historical Society, likes art to be seen. The society owns an Eakins painting, “The Translator,” which also hung at the seminary and which is being sold with the collection, the proceeds pegged for an endowment for the society’s lesser works.

Of “The Translator,” he asks, “It is a beautiful thing to have, but is (the seminary) the best place for it to be?”

Liz Beaman, American art specialist at Christie’s, said there is no target date for the sale.

“It’s incredible to have this many works at a time by one artist,” she said.

The Eakins portraits lie outside the realm of sacred art. Sacred altars, stained glass and statues of religious figures go to the archdiocese’s ecclesiastical exchange and are offered to new churches and other sacred installations around the country.

In a plum spot, taking the place of one of Eakins’ priests at the seminary, there now hangs a beautiful mother and child piece called “Resting on the Way to Egypt,” by Raffaello Spano.

“We love it,” said Cait Kokolus, vice president for Information services and assessment at St. Charles.

As curator at the seminary, Kokolus has a practical attitude toward the Eakins paintings.

“The purpose of the seminary is to educate and form young men for the priesthood,” she said. “I know I can’t care for the paintings the way they should be cared for.”

Opinion
Our church suspended in-person worship until 2021. This one question sealed the deal
© Copyright 2020, Religion News Service. All rights reserved. Use of and/or registration on any portion of this site constitutes acceptance of our User Agreement and Privacy Policy, Privacy Statement and Cookie Notice. The material on this site may not be reproduced, distributed, transmitted, cached or otherwise used, except with the prior written permission of Religion News Service.