A Chick-fil-A restaurant in Ohio, during early morning.

The iconic chicken chain, as well known for its conservative heritage as its savory eats, is recalibrating its moral and culinary compass. It wants to go from old school to almost cool. It wants to evolve from a place where gays once picketed to a place where they’ll feel comfortable going to eat. It wants to broaden the brand as it expands nationally and plows into the Millennial-driven urban arena.

Above all: it wants to be a serious player on fast food’s biggest stage.

CEO Dan Cathy’s comments condemning gay marriage in 2012 set off a store picketing and a social media firestorm. Now he has backed away from such public pronouncements that mix personal opinion on social issues with corporate policy.

“All of us become more wise as time goes by,” he said, apologetically. “We sincerely care about all people.”

While Cathy’s comments didn’t hurt short-term business — and even helped it — Chick-fil-A executives recognize they may have done longer-term damage to the brand’s image at the very time it was eyeing major growth outside its friendly Southern market.

The national growth is about to go into overdrive — and it has a huge, new product platform behind it. Its biggest-ever new product roll-out will be announced Tuesday: a grilled chicken line for which the company has spent the past 12 years testing more than 1,000 grilled chicken recipes and developing such super-secret grilling equipment that executives won’t let it be photographed.

Chick-fil-A’s food, long-regarded as extra savory but nutritionally naughty, is going through an industry unprecedented “cleaning” cycle, with an ultimate aim of improving its brand image with trend-setting Millennials. 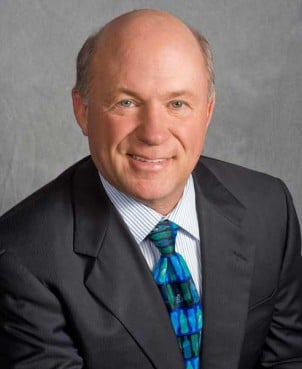 Last month, it announced plans to sell only antibiotic-free chicken within five years. It’s testing the removal of high fructose corn syrup from all dressings and sauces and artificial ingredients from its bun.
The once-tiny, regional chain just surpassed giant KFC to become the nation’s largest chicken chain in domestic sales. But along with this sales and geographical growth comes a new social consciousness.

That’s not by accident, said Christopher Muller, professor of hospitality at Boston University. “The politics of their Southern Baptist values will not transcend their core markets,” he said.

Chick-fil-A’s socially conservative agenda, which formally led the company to donate millions to charitable groups opposed to gay marriage, has been tempered. This, just as the company aims to expand into Chicago, New York and Los Angeles. Southern hospitality must give way to urban reality as the 1,800-store chain moves to compete with big city success stories like McDonald’s, Panera Bread and Chipotle.

If nothing else, Cathy has listened. In 2012, Cathy not only heard from some unhappy consumers about his comments against gay marriage, but also from some store operators and employees. Now, he said, “I’m going to leave it to politicians and others to discuss social issues.”

One past critic has even become an unlikely fan. “Dan and I have an ongoing friendship,” said Shane Windmeyer, executive director of the gay rights advocacy group Campus Pride. “I am appreciative for the common ground we have established in treating all people with dignity and respect — including LGBT people.”

Which means Chick-fil-A can focus on what matters most: the food and growth. The privately held company, whose sales last year reached $5.1 billion — up 9.3 percent, reports the research firm Technomic — may rank among the most intriguing growth stories in fast food. Imagine this: A typical Chick-fil-A racked up annual sales of about $3.3 million last year, while a typical McDonald’s posted sales of about $2.5 million. Never mind that Chick-fil-A is closed Sundays. 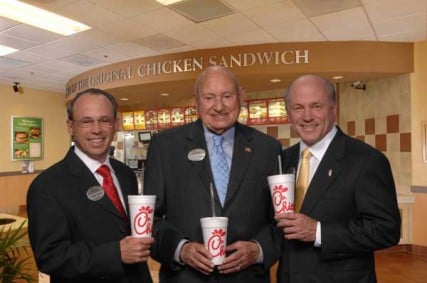 The Cathy family inside a Chick-fil-A store. Photo courtesy of Chick-fil-A

“The next big thing is urbanization,” says Cathy, 61, who tools around on his Harley-Davidson in his spare time. “That’s where the future is heading.”

So, the company that has spent 68 years building its stores inside suburban malls and near big-box retailers is mostly tossing out those plans. Now it wants to focus on big cities and big-city dwellers.

“The challenge in business is to stay ahead of the curve,” Cathy says. For Boomers, fast food was all about taste and price, he says. But for Millennials, he notes, it’s also about local sourcing, product quality and worker rights. For them, he said, “it’s not just a product story any more — but the whole story.”

Which is why Chick-fil-A removed yellow dye from its chicken soup late last year. And it’s why the chain has just begun testing a line of fruit smoothies made with spinach and carrots.

This is the same company whose chief spokesman is a cartoon cow whose singular message for almost two decades has never changed: “Eat Mor Chikin.” And it’s the company in which 93-year-old founder, S. Truett Cathy, Dan’s father, still keeps an expansive office, replete with photos of himself with George H.W. Bush, George W. Bush, Billy Graham and Pat Boone. 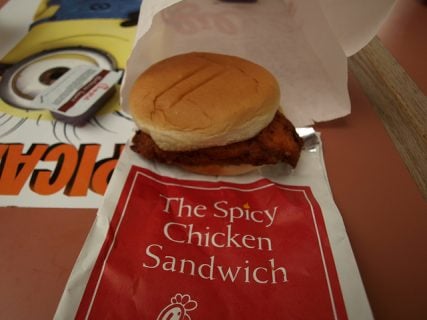 A spicy chicken sandwich at a Chick-fil-A restaurant

But if Chick-fil-A could frame a new photo of who matters most to the company, it might be someone such as 23-year-old Kelli Means-Cheeley. The Atlanta resident and recent college graduate stopped by a bustling Chick-fil-A near Atlanta’s airport and offered a thumbs-up after sampling the new grilled chicken. Healthy food ingredients are critical to Means-Cheeley, but, she says, “what’s also important to me is taste.”

Until now, the key rule for new products was that they had to be “cravable,” Farmer said. While they still have to be cravable, he says, there’s an increasing emphasis on them also being healthy.

That, says Cathy, has prodded Chick-fil-A to be “more transparent.” Last year it began offering “back stage tours” of its restaurants –where regular customers can request tours of the kitchens.

They want to open up the kitchens and allow customers to watch dough being rolled and salads being freshly chopped.

Chick-fil-A will open 108 restaurants this year — most of them urban and a good chunk of them in New York City.

The new urban locations will have much more natural wood. And some of the urban chefs are even replacing their old uniforms with snazzy chefs coats.

This new Chick-fil-A is striving to be very different from what was. “We’re one foot out of fast food,” Faulk said.