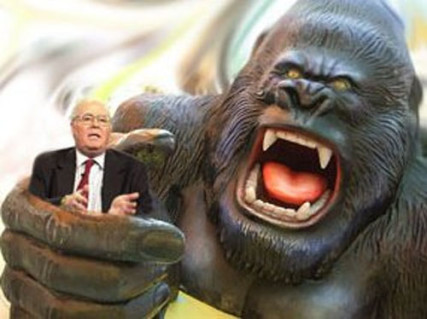 A couple of days ago Bill Donohue of the Catholic League emailed to ask if I’d heard Tom Doyle‘s speech at the Voice of the Faithful conference I wrote about last week. “Anxious to know your thoughts on what he said about me,” wrote Bill.

Jeez, I thought, now I am sorry I skipped the afternoon workshop run by the Dominican priest who’s been fighting clergy sexual abuse in the Catholic church for the past 30 years. However, a quick online search turned up an outline of Doyle’s remarks, in which “failing to muzzle Bill Donohue” is listed as evidence that the U.S. bishops “continue to treat victims with disdain at the very least.”

I told Bill I didn’t know anything more than what I’d found on the internet, to which he responded:

Does it bother you that one of the heroes on the Catholic left, and a priest at that, is recommending that the bishops silence a Catholic layman? I thought the Catholic left was aghast at bishops who “silence” dissident  theologians when they are asked to explain why they teach something other than Catholicism in courses on Catholicism.  I will deal with this publicly. This is not the first time someone has demanded that the bishops muzzle me, but when someone like Doyle makes it public at a conference, with no apparent push back, it breaks new ground. I would assume you would not agree with Doyle. Am I right?

I will deal with this publicly. I am, for the record, opposed to the U.S. bishops muzzling Bill Donohue.

Yet inasmuch as he uses his bully pulpit to defend the likes of Bishop Robert Finn of Kansas City and Archbishop John J. Myers of Newark and Archbishop John Nienstedt of St. Paul, the U.S. bishops might consider removing themselves from the choir. Finn is the one and only American hierarch ever to be convicted of failing to report a priest sex offender. Here’s what the federal prosecutor had to say last week in giving an award to the detective who investigated the case.

When it becomes clear at the outset of the investigation that the entire hierarchy of a centuries-old religious denomination does not seem willing to recognize that the children depicted in the images are, in fact, victims of child exploitation, nor seem very willing to help establish the identity of the children depicted, and instead are spending millions of dollars on legal counsel in an ill-advised effort to avoid having the priest and bishop accept legal responsibility for their crimes, then you know, as an investigator, that your work is cut out for you.

And here’s what the New Jersey prosecutor had to say last fall about Myers’ adherence to the Memorandum of Understanding (MOU) under which the Newark archdiocese agreed not to allow now defrocked priest Michael Fugee to work with children.

It has appeared, based on many public comments by Archbishop Myers, that the Church had no intention of monitoring Fugee any further and … it has not appeared that the Archdiocese made any significant effort to adhere to the terms of the MOU such that, at this juncture, we no longer have confidence in its ability as a signatory to honor the clear intent of the 2007 Memorandum of Understanding.

If anyone thinks that the pope’s appointment of a coadjutor bishop in Newark last fall had nothing to do with the Fugee affair, there’s a big church in Vatican City I’d like to sell him.
For his part, Nienstedt (among other things) failed to remove from ministry a priest whose abusive behavior was known to him in 2009 and who was subsequently convicted of criminal sexual misconduct. “Sadly, these crimes might have been prevented if the archdiocesan officials in positions of authority over the abusers had responded appropriately to misconduct,” declared a report released Monday by the task force authorized by the archdiocese to examine its handling of abuse cases.

Under the circumstances, you’d think that responsible leaders of the Catholic church in the U.S. would be wary of associating themselves with Donohue. I mean, I’m not suggesting that they actually return the $250,000 that the Catholic League gave to the U.S. Conference of Catholic Bishops two years ago. But it might at least be a good idea for Cardinal Dolan of New York, Archbishop Chaput of Philadelphia, and especially Cardinal O’Malley of Boston to ask that their testimonials be removed from the Catholic League website.

O’Malley, after all, is top dog in Pope Francis’ new commission on sexual abuse. It doesn’t do for him to be supporting an organization effectively opposed to punishing bishops for covering abuse up.