(RNS) The Bible encourages the “repression of women,” and it’s silent on such fraught topics as war or slavery. 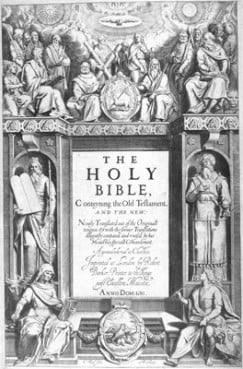 The frontispiece to the original 1611 King James Bible shows the Twelve Apostles at the top, with Moses and Aaron flanking the central text. In the four corners are evangelists Matthew, Mark, Luke and John. RNS file photo

As least, that’s what about one in five U.S. adults believe. But they’re wrong.

The American Bible Society’s annual “State of the Bible” survey reveals “the people of the book are not people of this book,” said Geof Morin, chief communication officer for the society.

“We know 88 percent of people say they have a Bible. They think: ‘I have a Bible. I have had one for a long time. I must know what’s in it.’ But people overestimate their knowledge,” Morin said.

The ABS survey of 1,012 U.S. adults, conducted by Barna Research, found that 82 percent of U.S. adults consider themselves at least somewhat knowledgeable about the Bible.

However, he said, “43 percent can’t even name the first five books of the Bible.”

When it came to assessing what the Bible says on several critical social issues, many showed fuzzy knowledge of the attitudes and behaviors addressed in Scripture.

Most Christians correctly say the Bible discourages prostitution, gambling and pornography; that it encourages generosity, forgiveness and patience; and that it is most certainly not silent on issues such as slavery, war and homosexuality.

However, there were distinct divides between “practicing Christians” — those who consider their faith important, attend church regularly and believe they are born again — and “notional” Christians who wear the label but disengage from practice.

The “notionals” roughly aligned with people who said they had no religious identity on several questions, including what the Bible says about war or on women.

Morin acknowledged that “repression is strong language. But we wanted to address that within every religious denomination there’s some sense of male headship. That can be framed positively, as a view that all are called to serve one another. Or it can be seen negatively, as (setting up) first- or second-class citizenship.”

While 91 percent of evangelicals say the Bible discourages “repression of women,” that figure drops to 61 percent for other practicing Christians, such as mainline Protestants.

“Notional” Christians — nearly half of all participants in the survey — have a grimmer picture of the Bible’s view on women. Nearly three in 10 (27 percent) say the Bible either encourages repression or is silent on women’s status (28 percent).

Among those who claim no religious identity (nones), 46 percent see the Bible advocating repression of women and 22 percent say it’s silent on the matter.

Questions about same-sex relationships and about war show similar divisiveness. Strong majorities in every category say the Bible discourages homosexuality. But 24 percent of “notional” Christians, and 33 percent of nones, say the Bible is silent on this topic.

About two in 10 (18 percent overall) also said the Bible is silent about war. However, this time the responses divided very differently: Only 11 percent of non-evangelical practicing Christians saw nothing in the Bible on this subject.

The American Bible Society’s survey differs from a 2010 national survey by the Pew Research Center on overall religious knowledge. That survey focused on core teachings, history and leading figures in five major world religions. It found the most knowledgeable were atheists and agnostics, Jews and Mormons, who outperformed Protestants and Catholics on most questions.

The ABS survey, meanwhile, was specifically focused on the Bible. Its purpose, said Morin, is to give the Bible society ideas for areas where it can work to strengthen biblical literacy and help make Scripture the foundation in believers’ lives.

“The American Bible Society wants to track what is happening in the culture and why people are less and less connecting the moral and political issues of the day with their Bibles,” he said.