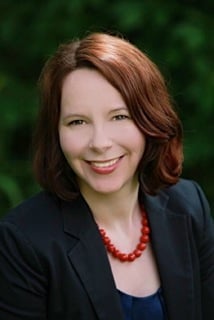 Catherine Dunphy came to seminary in her mid-20s, full of passion to work in the service of the Catholic Church. By the time she left, for many reasons, she had lost her faith. Photo courtesy of Catherine Dunphy

(RNS) Catherine Dunphy came to seminary in her mid-20s, full of passion to work in the service of the Catholic Church. By the time she left, for many reasons, she had lost her faith.

“I had this struggle where I thought, ‘I don’t believe this anymore,’” said Dunphy, now 40 and living in Toronto. “I felt I had no space to move or breathe. I felt like an outcast.”

Now, 10 years later, she is part of a new online project aimed at helping others like herself who are isolated by doubt in a sea of believers. Called Rational Doubt: The Clergy Project Blog, it debuts this week on Patheos, an online host of religion and spirituality blogs.

Rational Doubt is an extension of The Clergy Project, a private online community of clergy who, for a range of reasons, no longer believe in God. Started three years ago, the initiative has grown from just a handful of anonymous members who supported each other on online forums and discussions to a current roster of more than 550 priests, ministers, nuns, rabbis and even a few imams.

The blog’s goal is lofty: to engage and support clergy and laypeople who are not members of The Clergy Project but who doubt or reject religion and feel they cannot confide in friends, family and colleagues. Clergy Project members — all former clergy who no longer believe in God — will write posts, answer questions and engage in discussions about religion, nonbelief and the journey between the two.

Linda LaScola, a founder of The Clergy Project and editor of Rational Doubt. RNS photo by Adelle M. Banks

“There are a lot of nonbelieving clergy, and the fact that they can’t come out is having a negative effect on their lives,” said Linda LaScola, a founder of The Clergy Project and editor of Rational Doubt.

“People should not have to suffer that way.”

And they do seem to suffer. LaScola, a qualitative researcher, studied nonbelieving clergy with Daniel Dennett, a Tufts University professor. The two researchers found signs of depression, stress and debilitating anxiety.

After publishing their work, they helped found The Clergy Project with Richard Dawkins, the atheist and evolutionary biologist, and Dan Barker, a former minister who is now a secular activist.

“I hope the blog will provide encouragement and support to people who are in the same predicament as the people in The Clergy Project,” Dennett said. “I think there are a lot of them out there.”

The blog follows the recent publication of “Caught in the Pulpit: Leaving Belief Behind,” Dennett and LaScola’s book based on additional research among nonbelieving clergy. In interviews with 32 men and women from Pentecostal, evangelical, mainline Protestant, Catholic, Jewish and Mormon backgrounds, they discovered that many, like Dunphy, started wrestling with doubt in seminary.

Most said they kept quiet out of fear of disappointing others or because they didn’t have anyone to talk things through with.

“I wanted to believe in God; all those years, I wanted to,” one former Presbyterian clergywoman says in the book of her time in seminary. “I wasn’t really sure if I did or not, but I wanted to.”

LaScola was so struck by the universality of doubt among seminarians — one called it the “dirty little secret” of seminary life — that she interviewed three seminary professors about how they handle (or avoid) their students’ more probing questions about faith.

“They were accessible people, they were nice people, but they were kind of ivory towerish,” she said. “They were sensitive to their students’ plight, but firm in their role as conveying the academic information about religion.”

And once the seminarians were leading congregations, they reported even more isolation and frustration.

“You do a lot of crying,” a Mormon bishop says in the book. “You try to talk to your wife about it, but she’s still pretty orthodox, so it’s hard on her. You’re alone. You’ve got no one to talk to because you’re a bishop … So it tears you apart.”

Will Willimon, a former United Methodist bishop and now professor of Christian ministry at Duke Divinity School, said seminaries and religious institutions do not usually have formal programs or resources to aid those struggling with faith. As a campus minister, he has counseled seminary students deep in doubt, and as a bishop in Alabama he helped several doubting pastors leave their congregations.

He says he respects those who find the strength to raise their doubts and leave the seminary or the church if it is no longer the right place for them.

“I consider that a victory,” he said. “Better now than when you are 50 and you’ve had your first heart attack and are miserable.”

The founders of Rational Doubt hope it will alleviate some of that misery. LaScola did not want to reveal planned discussions or articles but said contributors will range from former nuns to lifelong atheists. Many will be clergy who have left the pulpit after lengthy battles with a diminishing, and ultimately extinguished, faith.

Among them will be Dunphy — a founding member of The Clergy Project and its former executive director.

“We are all swimming in the same pool, but we are in the deep end and they are in the shallows,” she said of Clergy Project members and readers of Rational Doubt. “The blog will bridge that gap.”