WASHINGTON (RNS) For Holocaust diarist Anne Frank, hiding from the Nazis in an Amsterdam attic, hope came in the form of a white horse chestnut tree growing outside her window.

Now a three-foot sapling grown from that same tree graces the West Lawn of the U.S. Capitol, a symbol, lawmakers said, of the young girl’s abiding faith in humanity. The Jewish teenager wrote about the tree, and the joy she took from it, three times in her diary, which is perhaps the world’s best-known piece of Holocaust literature.

“May this tree grow to its full height, serene and bursting with life, planted in our nation’s capital,” said House Majority Leader Eric Cantor, R-Va., at a Wednesday (April 30) ceremony that was moved indoors because of a steady chilling rain. 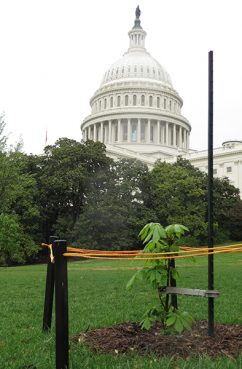 “It will remind those who come to see it of the great blessing that we all have been granted to live and thrive in America — a country whose ideals repudiate the hatred and bigotry that prematurely cut down Anne Frank’s life.”

“Anne retained her faith in humanity even as she and most of her family fell victim to Hitler’s butchery,” said Senate Majority Leader Harry Reid, D-Nev., who was joined at the dedication by Senate Minority Leader Mitch McConnell, R-Ky.; Dutch Foreign Minister Frans Timmermans; several Holocaust survivors; and Rep. Debbie Wasserman Schultz, D-Fla., who helped bring the sapling to the Capitol.

Anne, who died when she was 15 at the Auschwitz concentration camp in 1945, wrote in her diary of the tree: “As long as it exists, how can I be sad?”

In 2010, weakened by disease, the tree fell in a windstorm. But the Anne Frank House, which preserves her family’s hideout as a museum, had harvested chestnuts from the tree and sprouted them into saplings, offshoots of Anne’s tree to be planted around the world.

Eleven of those saplings were sent to the U.S. in 2009, where the New York-based Anne Frank Center USA asked for applications from organizations that wanted to plant and care for an Anne Frank tree as a memorial to victims of the Holocaust and a reminder to stand against prejudice.

The center received dozens of proposals. Among the successful ones: Boston Common in Massachusetts, the Holocaust Memorial Center in Michigan and the Southern Cayuga School District in New York.

After three years of quarantine required by the U.S. Department of Agriculture, the saplings were cleared for planting, and the first went into the ground last year at Sonoma State University in California. The sapling on the Capitol’s West Lawn was the sixth to be planted.