Cardinal Walter Kasper speaks at a public event sponsored by The Fordham University Center on Religion and Culture on Monday (May 5) in New York. Photo courtesy of Trace Murphy

NEW YORK (RNS) The German cardinal who has been called the “pope’s theologian” said fresh Vatican criticism of American nuns was typical of the “narrower” view that officials of the Roman Curia tend to take, and he said U.S. Catholics shouldn’t be overly concerned.

“I also am considered suspect!” Cardinal Walter Kasper said with a laugh during an appearance on Monday (May 5) at Fordham University. “I cannot help them,” he added, referring to his critics in Rome.

The 81-year-old Kasper, who served as the Vatican’s chief ecumenical officer under Popes John Paul II and Benedict XVI, is seen as a close ally of Pope Francis. When Francis summoned bishops for a two-day summit on family issues in February, he tapped Kasper to give an opening address to lay the groundwork.

In many ways, Kasper may better reflect Francis’ outlook than the crackdown on U.S. nuns launched by the Vatican’s doctrinal office. Just as Francis has downplayed the focus on rule-following and hot-button issues in an effort to widen the church’s appeal, Kasper has pushed the importance of pastoral flexibility and realism in walking with Catholics throughout their imperfect lives.

Kasper is in the U.S. to discuss his book, “Mercy: The Essence of the Gospel and the Key to Christian Life.” It includes a blurb from Pope Francis, who has made mercy a cornerstone of his ministry since he was elected last year.

On Monday, Kasper told the audience that after Francis praised him by name just days after his election, “an old cardinal came to him and said, ‘Holy Father, you cannot do this! There are heresies in this book!’ ” 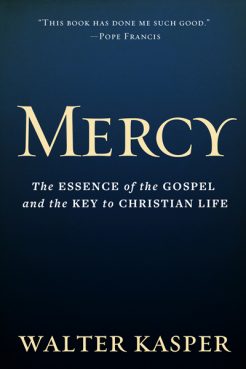 As Francis recounted the story to Kasper, he said, the pope smiled and added: “This enters in one ear and goes out the other.”

It was Kasper’s way of providing context to the news that the Vatican’s doctrinal czar, Cardinal Gerhard Mueller, had sharply criticized leaders of more than 40,000 American nuns for disobedience to Rome and for “fundamental errors” in their beliefs.

Mueller’s Congregation for the Doctrine of the Faith has been trying to rein in the American sisters for two years. Talks were believed to be going well, especially after the election of Francis. But Mueller’s criticisms and stark warning that the nuns must heed his demands seemed like a major setback to those hopes.

Kasper said that he hoped that the confrontation between the Vatican and the Leadership Conference for Women Religious would be overcome.

“If you have a problem with the leadership of the women’s orders, then you have to have a discussion with them, you have to dialogue with them, an exchange of ideas,” he said. “Perhaps they have to change something. Perhaps also the Congregation (for the Doctrine of the Faith) has a little bit to change its mind. That’s the normal way of doing things in the church. I am for dialogue. Dialogue presupposes different positions. The church is not a monolithic unity.”

“We should be in communion,” he continued, “which also means in dialogue with each other. I hope all this controversy will end in a good, peaceful and meaningful dialogue.”

At Fordham, Kasper also praised an American feminist theologian, Sister Elizabeth Johnson, who is scheduled to be honored by the U.S. sisters and whom Mueller singled out for criticism.

Mueller had ripped the LCWR for deciding to honor Johnson without seeking Rome’s approval. Johnson, a renowned theologian who teaches at Fordham, was rebuked by the U.S. bishops’ doctrinal committee in 2011 for arguments she made in her popular book, “Quest for the Living God.”

Asked about Johnson and another feminist theologian, Elisabeth Schussler Fiorenza, whose views have also been disputed by the hierarchy, Kasper said that he has known them both for years and added: “I esteem them both.”

Kasper — often a sparring partner with his fellow German theologian, Cardinal Joseph Ratzinger, who later became Benedict XVI — said that critiques are part of academic discourse but said that the CDF sometimes “sees some things a little bit narrower.”

He said that the criticism of Johnson “is not a tragedy and we will overcome,” and he noted that St. Thomas Aquinas, the medieval theologian now considered one of the greatest minds in the church, was condemned by his bishop and lived under a shadow for years.

“So she is in good company!” Kasper said of Johnson.