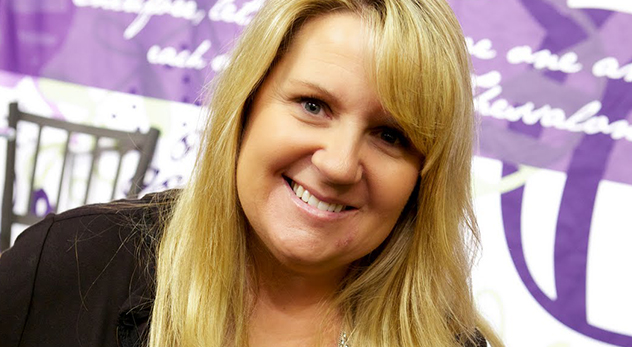 Shelene Bryan, a successful Hollywood producer, gave up her career to fight poverty. Now she's calling out Christians to join her. - Image courtesy of Shelene Bryan
May 9, 2014
Jonathan Merritt

Shelene Bryan, a successful Hollywood producer, gave up her career to fight poverty. Now she's calling out Christians to join her. - Image courtesy of Shelene Bryan

In 2009, Shelene Bryan was a successful producer who was just releasing "Like Dandelion Dust" starring Mira Sorvino. But today, she leads Skip1, an organization devoted to fighting poverty through raising money for projects such as building wells and community kitchens, and author of "Love, Skip, Jump: Start Living the Adventure of Yes."

A few years ago, Shelene and her husband sponsored two children in Africa for $50 per month. As far as she knew, they were supporting child GBB 8348 and child GBA 8453. Shelene decided to find out if GBB 8348 and GBA 8453 really existed, so she packed up and flew to Uganda to find them. Turns out, they did exist and her money was helping them as the organization claimed. But the trip had an added effect of convincing her that more needed to be done about poverty, so she quit her Hollywood career to do something more. Here, we discuss the way she thinks about poverty and how she is challenging Christians to do more.

RNS: Ron Sider once highlighted the problem of "rich Christians in an age of hunger." Most Americans are wealthy by global standards and most Americans are Christians. When so much of the world is facing poverty, do you view the wealth of American Christians as a problem?

SB: Our problem is not wealth, but the heart. [tweetable]A life focused on material things will lead you to ruin.[/tweetable] For some reason, having material riches tends to make us apathetic about spiritual things. This was the problem with the church at Laodicea, and Jesus specifically directed John to write a letter to warn them of their apathy.

I believe the gift truly belongs to the giver. Holding onto our wealth with tightly clenched fists prevents God from placing into our hands what he wants. It’s only when we come to God with our hands open, with all our stuff offered up to him, that we can really receive what he has planned for us. The problem is most of us do not really live like that because we like our stuff.

RNS: Many American Christians sponsor children all over the world. For you personally, just sponsoring children wasn’t enough (or your best effort) at addressing the real problems faced globally. What would you say to the thousands of Christians who have pictures of sponsored children hanging on their refrigerator doors?

SB: I’m glad people are sponsoring children and saving the lives of kids. I have looked in the eyes of unsponsored kids who are dying, knowing it was too late for them, so God bless anyone who can sacrifice just a tiny bit to save a life.

We live in a culture where people are dying every day from the effects of overindulgence and overeating. When you see the faces of children who are literally starving to death, that is a game changer. I will never again be casual about sponsorship. Giving the spare change in your pocket could truly be the difference between the life and death of a hungry child. That being said, I would encourage people who have the privilege of being sponsors to take it one step further. Make your sponsored child your child. Don’t just write a monthly check in a detached way and be done. Get to know them and care for them as a member of your own family. I promise you, you won’t regret impacting their lives in a meaningful way. The reward will be yours.

RNS: Talk about your "skip it" message and why you think this may be the key to solving a lot of the problems Christians want to address.

SB: At Skip1, we challenge people to give out of their own excess.  We want everyone to skip one thing—a lunch, a manicure, a latte, a new outfit—and take what they would have spent on that item and donate it instead to care for the poor and needy. It’s really that simple. “Skip it” for the sake of someone else.

There is a connection in the brain when you deliberately forego something for the sake of someone who can never repay you. If you skip your dinner one night and feel a pang of hunger for a few hours you get a tiny taste of how some kids feel every night.  It just might change your perspective.

RNS: Doesn't asking Christians to just give money keep problems at a distance? Don't people need to see, taste, and touch the issues they claim to care about?

If God puts it on your heart to give, then you better give. But just because you give, don’t assume you are done. Seeing, tasting and touching will change your life. After getting personally involved I could not look at hungry children and think it was somebody else’s problem.

In Matthew 22, Jesus says the most important commandments are love God and love your neighbors. In light of God’s epic love for me, when it comes down to the core meaning of my life, the only factor I live by is the trustworthy words of God’s greatest directives: love God and love people. As Christians it is our responsibility to love and care for the poor. There are 168 passages in the Bible that reference the poor. The funny thing is, in church I was never taught any of them. I don’t know how we missed it for so long, but I am determined to do something about it.

RNS: You talk about leaving America to address problems in Africa, but I've heard a lot of Christians say, "We have poverty right here in America. We should solve our own problems first." How would you respond to someone who makes this argument?

This is not a mutually exclusive proposition. My philosophy is yes let’s take care of poverty here and yes let’s take care of the poverty in Africa, South America and wherever it appears. But the amazing thing about many third-world countries is western resources go so far and make such a difference. Sometimes it’s literally the difference between life and death. In Africa, I have been able to buy beds for three dollars each.

I had an “America first” attitude for a long time. It was an attitude held in ignorance. I was happy sending a donation check when I’d hear someone wanted to go to the ends of the earth to help the poor, but as for me, I was going to stay right here in the good ole USA. On more than a few occasions I commented, “Somebody has to stay here to make money so others can go.” It sure sounded good.

My challenge to those who have this attitude is, “So what are you doing to eradicate poverty here in America?” Usually, they slink away in embarrassment because the answer to that question is "nothing." It’s usually just a lame excuse not to give or get involved.