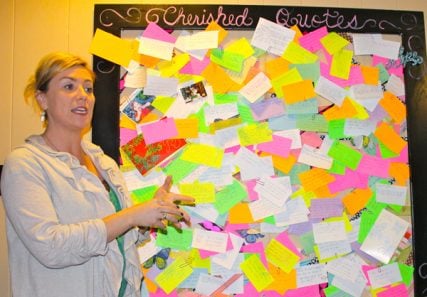 Polly Wright, a former topless dancer, leads “We Are Cherished,” a Texas-based nonprofit that visits adult entertainment establishments to deliver gifts and tell women that they are “loved, valued and cherished.” Religion News Service photo by Bobby Ross Jr.

COLLEYVILLE, Texas (RNS) The smoke, the loud music and the smell of perfumes trigger uncomfortable memories for Polly Wright.

But Wright ignores those reminders of her past as she and a troupe of women make their way to the strip club’s dressing room to deliver gift bags filled with fingernail polish, colorful earrings and handwritten notes with messages such as “I’m praying for you.”

The bags also contain tubes of lip gloss with contact information where dancers can receive help and support. A finger can cover the tiny print so a pimp or abusive boyfriend can’t see it.

“We are in there saying, ‘You are loved, valued and cherished, and you are not alone,’” said Wright, founder and executive director of We Are Cherished, a faith-based organization that regularly visits more than 50 adult entertainment venues throughout the Dallas-Fort Worth area.

Across the nation, dozens of similar ministries, such as Treasures in Los Angeles, Jewels in Salt Lake City and Beauty From Ashes in Fort Myers, Fla., provide emotional support and a potential way out for prostitutes and other sex workers.

Such organizations often partner with law enforcement authorities to identify and help the tens of thousands of women and teens who feel trapped in an X-rated industry that generates billions of dollars a year in profits.

Supporters of New Friends New Life, a Dallas nonprofit that helped 700 exploited girls and women last year, point to the abuse endured by many who work in the sex industry. Photo courtesy of Katie Pedigo

“I use a term in this all the time: easy in, hard out,” said Sgt. Byron Fassett, who oversees the Dallas Police Department’s high-risk child victims and sex trafficking unit. “They don’t want to be doing this. They want out. They just don’t know how to get out. And that takes mentoring. It takes somebody to sit there and help them and try to show them that path.”

While topless bars typically are legal businesses, a recent study commissioned by the U.S. Justice Department found “an underground commercial sex economy in America that is diverse, organized and lucrative, extending far beyond the typical street corner,” researcher Meredith Dank and colleague Kate Villarreal wrote in a blog post.

In just seven urban areas studied, underground commercial sex represents a nearly billion-dollar industry — from a massage parlor in Seattle to a high-end escort service in Dallas to a makeshift brothel in California to a clandestine Internet site, as the Urban Institute’s Dank and Villarreal described it.

The national study was the first to estimate the monetary value of the sex economy in U.S. cities and address its deep complexity, reported Dank, one of the researchers who interviewed 260 pimps, traffickers, sex workers, child pornographers and law enforcement officials.

Shining more light on the industry can motivate communities to help more victims escape the shadows of sex trafficking, the researchers said.

“We need more resources and mandates for law enforcement and service providers not only to find, arrest and convict traffickers, but also to provide services for those who want to leave the life but have few alternatives,” Dank and Villarreal wrote.

Katie Pedigo has a law degree but says it’s her passion for human rights that led her to serve as executive director of New Friends New Life, a Dallas nonprofit that helped more than 700 exploited girls and women last year. Religion News Service photo by Bobby Ross Jr.

In the heart of Dallas — across the highway from Southern Methodist University and the George W. Bush Presidential Library and Museum — New Friends New Life occupies a suite in a high-rise office tower.

The organization grew out of a grass-roots ministry that started 16 years ago when a woman in the sex industry became involved in a women’s Bible study at the Preston Road Church of Christ in Dallas.

“We feel like we’re screaming it from the rooftops every day: It’s happening,” Pedigo said of sex trafficking and exploitation. “It’s happening to American girls on every street corner, every bus stop, every mall in our city, and we need to open our eyes, and we need to know it’s happening, so we can fix it and get it out of the shadows.”

In Colleyville, an affluent suburb between Dallas and Fort Worth, First Baptist Church provides a 3,000-square-foot house that serves as headquarters for We Are Cherished.

Every Tuesday evening, up to 25 women meet at what they call The Cherished House to enjoy a home-cooked meal and share stories. Some of the women have left the sex industry. Others still work in it. Some bring their children, as baby-sitting is provided.

The Cherished House also provides a boutique, where the women pick out new and gently used outfits, shoes, purses and accessories.

Wright, a former stripper who now runs the ministry, speaks from experience after a long, rocky road of excessive drinking, drug use and “sex-for-anything-but-love,” until she converted to Christianity after marrying her husband, Rodney, 18 years ago.

Former dancer Harmony Dust, author of “Scars and Stilettos,” praises Polly Wright for overcoming her own difficult past and “showing others the path to freedom.” Photo courtesy of Harmony Dust

It was her mother-in-law, Troyce Wright, a Southern Baptist, who showed her unconditional love when Polly did not believe she deserved it, said Wright, who recounted her experiences in the book “Cherished: Shattered Innocence, Restored Hope.”

“Because she was willing to face her past, to return to the places where she found herself held captive, she is in a position to bring hope to others,” Dust said of Wright. “She hasn’t just overcome the pain from her past; she is serving as a liberator, showing others the path to freedom.”

Now a 41-year-old mother of twin teenagers, Wright attributes the effectiveness of the ministry to the sincere way she approaches the women she meets in topless bars.

“We never ask a woman to leave the industry, because once you take away choice, you take away love,” Wright said. “Of course, my heart is for them to leave … and they all know that. But that’s in their time.”

Ministry volunteers listened to her story, offering encouragement instead of finger-pointing, she said.

“The Christians I had encountered in my life had pointed fingers at me and told me I was going to hell,” said Stevens, 45, who eventually quit the industry, married her high school sweetheart and moved to Columbus, Ohio, where she started a satellite branch of We Are Cherished.

And even for Wright, the road to a better life is a lifelong journey.

She still undergoes counseling to help cope with her traumatic past, which included sexual abuse as a child.

“I’m not the one to say, ‘Hey, I am awesome and amazing and I got it all together,’” she said. “It’s still hard. It’s still a journey. God is still refining me. And I pray that he’ll always be refining me, because in that, I get strengthened in his name.”