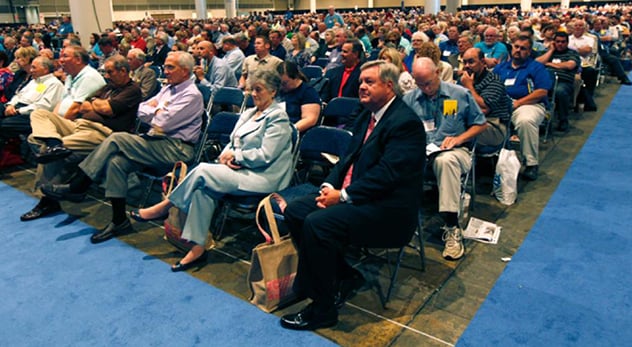 American culture is morphing at light speed on matters such as secularism, sexuality, and spirituality. Can the denomination remain relevant in such a moment?
June 9, 2014
Jonathan Merritt

American culture is morphing at light speed on matters such as secularism, sexuality, and spirituality. Can the denomination remain relevant in such a moment?

When the Southern Baptist Convention (SBC) gathers in Baltimore tomorrow for its annual meeting, they are expected to discuss their declining numbers as well as cultural hot buttons such as homosexuality and transgender issues. As Yogi Berra once said, "It's like deja vu all over again." Membership and baptisms within the denomination have been declining for years and the SBC never misses an opportunity to publicly weigh in on the political and cultural issues du jour.

But the larger question hovering over the Convention this year seems to be whether the nation's largest Protestant denomination can thrive in the 21st Century. American culture is morphing at light speed on matters such as secularism, sexuality, and spirituality. Can the Convention remain relevant in such a moment?

To address this question, I talked with Dr. David Dockery, the newly elected president of Trinity International University and author of "Southern Baptist Consensus and Renewal: A Biblical, Historical, and Theological Proposal." Here, we discuss the denomination's decline, sexuality, and racial reconciliation.

RNS: The Southern Baptist Convention has reported an annual decline in baptisms since the late 1990s with another decline and membership has declined for the past seven years. Some have called this "a spiritual problem" while others speculate that it is "a cultural problem" brought on by an increasingly post-Christian, pluralistic society. In your opinion, what's driving this decline?

DD: I think the issues that you have noted are multi-faceted and rather complex. Many of us across SBC life have not recognized well the rapidly changing cultural context in which we now find ourselves, perhaps best typified by the Pew study on "the rise of the Nones." Secondly, I think, we are all probably unaware of the incipient universalism that dominates the thoughts of many in our congregations. The combination of these two factors means that the reality of the lostness of those all around us has somehow disappeared from our thinking and thus the urgency of Great Commission efforts has taken a backseat.

I am also somewhat certain that the ongoing tensions in our midst and the ways that we have at times failed to demonstrate Christian love and unity with and toward one another in our own denominational context have not always been helpful for some in the watching world around us. In the days to come, we will need to trust the Lord to grant us much wisdom in our evangelistic outreach and strategy, courage and faithfulness in the sharing of the gospel, and sensitivity to the ways that we relate one to another within our SBC world and, also, to the changing context and culture that we have been called to serve at this time.

RNS: Journalist Molly Worthen speculates that the "Conservative Resurgence," (movement to purge liberals from SBC life in the 1970's and 80's) has "failed" because they are now "hemorrhaging members just like everybody else." How do you respond?

DD: It is hard to measure the success or failure of a movement that in many ways is still in progress and ongoing formation. Certainly there is much for which to give thanks regarding the recovery of commitments to the full inspiration and authority of Holy Scripture and to the truthfulness and transforming power of the gospel. I do think that leaders across the SBC are rightly concerned about the decline in baptisms and church membership, but it will be awhile before all of the aspects and implications of the conservative resurgence can be evaluated and interpreted.

RNS: Pastor Danny Cortez of The New Heart Community Church in California created a media firestorm recently when he led his SBC-affiliated congregation to vote to accept the gays and lesbians into the life of their congregation. How should the denomination respond to churches who take such a position, in your opinion?

DD:  I think that almost all congregations across the SBC are quite aware of the clear teaching regarding both doctrinal and ethical matters in the “Baptist Faith and Message (2000).”  The denomination needs to respond carefully, wisely, and prayerfully to this congregation or to other congregations who struggle with and wrestle with these matters. In doing so, it is important to recognize that Baptist churches are autonomous and can make decisions for themselves on a variety of matters and we all respect their privilege to do so, but it is vital to note that churches who choose to relate to the SBC do so voluntarily in light of shared doctrinal commitments, which are best expressed in the Baptist and Faith and Message.

RNS: You edited a book a few years ago called, "Southern Baptist Identity: An Evangelical Denomination Faces the Future." But many Southern Baptists are rooting their ecclesiological identities outside of the denomination. Some have chosen to drop "Baptist" from their name. The convention even voted to allow a different label for churches who felt the SBC moniker wasn't helpful. Does this trend concern you?

DD: I think that for many years this trend that you have noted has been developing.  I am sure that some find it more problematic than do others. I think it is a choice that each congregation must make as they determine the best name for the church and the best way to serve the context and community where they are located. Churches who cooperate with the Southern Baptist Convention must find the best way to carry out their responsibilities to make sure that those in their congregations are aware of the church's commitments regarding doctrinal beliefs, church practice, and support for shared and cooperative efforts regarding missions, evangelism, education, and benevolence ministries.

It is becoming increasing clear that the work that Robert Wuthnow, the brilliant Princeton sociologist, did on "the restructuring of American religion" is more of a reality now than when that research was completed over two decades ago.

RNS: The Southern Baptist Convention was founded over the issue of slavery and they were strong supporters of segregation and Jim Crow Laws. But in 1995, the Convention passed a resolution condemning racism as sin and apologizing for their past. Is this enough? Should Southern Baptists consider the matter of race and the hurtful past "water under the bridge" or what more should they do to pursue reconciliation?

DD: We can give thanks to God that Southern Baptists as a whole have made much progress in these areas in recent years. Southern Baptists are now one of the most ethnically diverse denominations in the entire country. The election of Fred Luter as SBC president over the past two years is more than a symbolic victory in this regard. I had the privilege this past year to participate in a most encouraging and heartening effort by serving as the convener for an important gathering of racially diverse leaders from all across the entire Convention who are committed to finding ways to strengthen commitments to racial reconciliation as well as to intercultural competence and communication.

But while giving thanks for all of these important markers of progress, I would quickly add that we still have a long way to go in our efforts to live out the kingdom aspirations of diversity and racial reconciliation made known to us in Revelation 7. Thus, we need to continue to give much attention to these matters.  We need not only focus on what it means to become faithful Great Commission followers of Christ, but also Great Commandment followers of Christ who are called to love those around us.