WASHINGTON (RNS) Americans are slowly pulling themselves out of a charitable slump — except when it comes to religious groups.

That takeaway from the new Giving USA report, perhaps the most-read annual study on philanthropy, shows a slight downturn for churches and other religious organizations against an improving charity landscape.

American individuals, groups, foundations and corporations gave $335 billion in 2013 — a 3 percent increase from 2012 (adjusted for inflation). It’s the fourth consecutive year in which giving rose after taking a beating during the recession that officially ended in 2009. 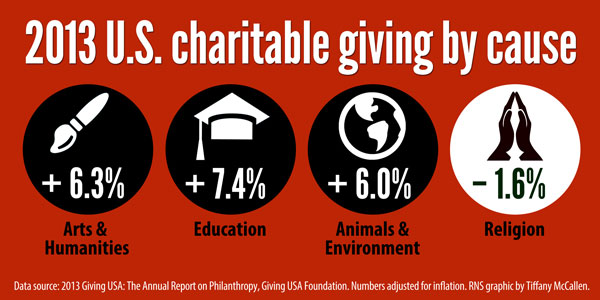 “2013 U.S. Charitable Giving By Cause” RNS graphic by Tiffany McCallen.

But religious groups saw donations drop 1.6 percent from 2012 to 2013. That contrasts to healthy jumps in education (7.4 percent), the arts and humanities (6.3 percent) and environmental and animal groups (6 percent), according to the study released Tuesday (June 17), which Giving USA produced with the Indiana University Lilly Family School of Philanthropy.

Behind the sad stats for religious groups, experts say, is  Americans’ declining interest in religious institutions.

“Giving to religion represents primarily giving to houses of worship,”  said Rick Dunham, CEO of Dallas-based Dunham+Company, a fundraising consulting company that mostly works with Christian ministries. “There has been a growing percentage of Americans with no religious affiliation, as well as a decrease in both church attendance and membership.”

According to a 2012 Pew Research Center study, about one in five Americans say they have no formal religious affiliation.

While charitable giving overall has increased in recent years, donations to religious groups have declined slightly.

But Dunham, who serves on the editorial review board of Giving USA, also noted that many religiously oriented charities are often counted in other sectors, such as education and human services. “This is a bit of a complex picture,” he said, because giving to religion “is both declining … as well as shifting from houses of worship to religiously affiliated charities that are counted in other sectors.”

Still, the religious sector continues to collect a greater proportion of total charitable giving — 31 percent — than any other, according to the report. The next largest share of the philanthropic pie went to education, with 16 percent of donors’ dollars.

The Giving USA study drew on many government and private groups for data, including the Internal Revenue Service and the U.S. Census Bureau.

News
In Oregon, churches and anti-fascists unite to provide mutual aid to fire evacuees and others in need
News
Salvation Army starts red kettle program early amid ‘tsunami of human need’ caused by pandemic
Buddhism
Buddhist monks have reversed roles in Thailand – now they are the ones donating goods to others
News
In Greece, pandemic deprives refugees of vital link to food and locals
News
When churches reopen, don’t sing or shake hands, do make sermons short, says new guide