ROME (RNS) Anna Ferretti has been married for more than 40 years, and she and her husband are the proud parents of four children. There’s only one catch: Her husband is a Catholic priest.

“At first we had to do everything to keep our love secret,” said Ferretti, who lives in Naples. “But it was impossible to hide such strong feelings, and we decided to make our relationship public.” 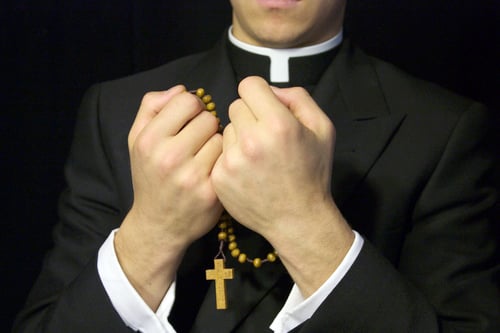 A number of women married to or wanting to be married to Catholic priests are petitioning Pope Francis to reconsider the church’s stance on celibacy.

Ferretti met her husband, Natale Mele, when she was a student and he was a priest running youth programs in the city’s archdiocese.

Mele technically gave up celebrating Mass and hearing confessions when they got married, but in the couple’s eyes — if not in the eyes of the church — he’s still a priest because he never formally renounced his vows. They’ve lived together ever since.

“Our marriage is not registered in the church,” she says, “but it is written in heaven.”

Last month, a group of 25 Italian women wrote to Pope Francis to ask him to lift the ban on priestly celibacy so that they can live openly with the priests they love. The women found each other on Facebook; Ferretti is not officially part of that group.

“We love these men, they love us, and in most cases, despite all efforts to renounce it, one cannot manage to give up such a solid and beautiful bond,” they wrote to Francis. “We humbly place our suffering at your feet in the hope that something may change, not just for us, but for the good of the entire Church.”

It hasn’t been an easy road. In Italy, the women are sometimes called “God’s rivals,” competing for the time and attention of the men they love. Even when their love is reciprocated by a man of the cloth, the women find that their families and friends often reject them. They’re sidelined in their careers and forced to hide emotional and sexual expression.

So far, their campaign has fallen flat. Many of the women don’t want to go public, to protect their reputations and the careers of the men they love. While not addressing their campaign directly, Pope Francis has nonetheless signaled that mandatory celibacy could be up for discussion.

Returning from the Middle East in May, Francis told reporters that he believed that Catholic priests should be celibate, but he noted: “Celibacy is not a dogma. It is a rule of life that I appreciate very much and I think it is a gift for the church, but since it is not a dogma, the door is always open.”

That’s little comfort for couples such as Ferretti and her husband, who were shunned by their families as well as local priests and bishops when they announced their love for each other. The priest who married them later got married himself.

“Maria,” another Italian woman who fell for a priest when she was 18, declined to give her real name or disclose where she lives because of the challenges she has faced in her personal and working life. She and her husband have been together for more than 40 years and have two children.

“I had a lot of trouble in the beginning because my husband wanted to remain a priest and even though he loved me, he did not want to renounce his ministry,” she said in an interview.

“Our relationship was secret for 15 years. My family — especially my mother — did not accept it at first and did not speak to me for several years, until her grandchildren were born. I have also suffered many reprisals and great damage to my career.”

Twenty-five women have expressed their views on the role of women, peace and social justice in a controversial new book titled “Dear Francis, 25 women writing to the Pope.”

For the women, it’s not just about honesty, but also protection for the women. As Maria put it, the church needs to “wipe out the hypocrisy that allows a cleric to have secret sexual relationships without any commitment.”

While some Catholic clerics — including popes — have been sexually active and even married in the past, celibacy has been a standard requirement since 1563 — reaffirmed by the Council of Trent, which was convened by Pope Paul III, himself the father of four.

Catholic and Orthodox church officials in North America recently asked the Vatican to let married men become priests in Eastern rite Catholic churches (there’s been a ban in effect since 1929). Beyond Francis’ comments, there is speculation that celibacy could face fresh debate at the Vatican after recent comments by the secretary-general of the Italian Bishops’ Conference.

“My wish for the Italian church is that it is able to listen without any taboo to the arguments in favor of married priests, the Eucharist for the divorced and homosexuality,” Bishop Nunzio Galantino told the Florence-based La Nazione newspaper.

Vittorio Bellavite, spokesman for the Italian branch of the global reform group We Are Church, said the church needs to confront the reality that mandatory celibacy is hurting the church.

“There is a growing conviction in the church that we can and should return to what was normal in earlier centuries,” Bellavite said. “At least so we have two situations — a celibate priest or a married priest.”

Bellavite said there was another, more practical reason to change the rules — a shortage of priests in many countries.

“We have to guarantee the celebration of the Eucharist every Sunday. That is not happening in many parishes,” he said.

News
Taco trucks and voter guides boost political profiles of faith communities at the margins
News
With rising COVID-19 cases inside the Vatican, pressure mounts for Francis to don a mask
Purple Catholicism
Your dread of the 2020 election and coronavirus will end. What will you obsess about then?
Signs of the Times
With 9 new electors, Pope Francis remakes the college of cardinals
News
Pope names 13 new cardinals, includes Washington DC Archbishop Gregory
© Copyright 2020, Religion News Service. All rights reserved. Use of and/or registration on any portion of this site constitutes acceptance of our User Agreement and Privacy Policy, Privacy Statement and Cookie Notice. The material on this site may not be reproduced, distributed, transmitted, cached or otherwise used, except with the prior written permission of Religion News Service.