WASHINGTON (RNS) Cheryl Rupp held a homemade sign declaring “FREEDOM IS Given By GOD NOT by Govt.” and the chant “one man, one woman” rang out on the Capitol lawn Thursday (June 19) as several thousand marchers rallied to show their support for traditional marriage. 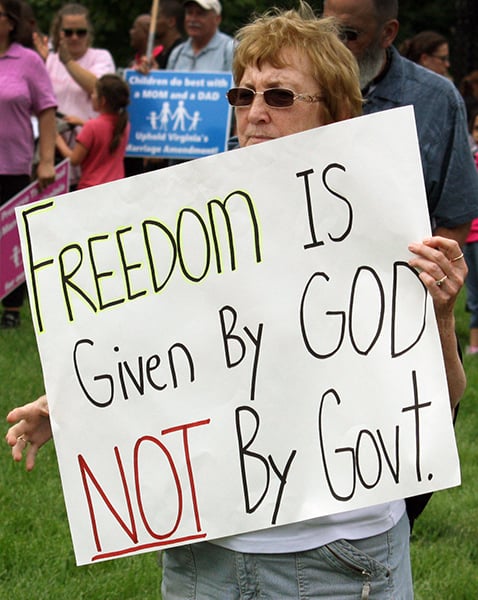 Cheryl Rupp brought a homemade sign to the March for Marriage event on June 19. She said allowing same-sex marriages would affect America’s schools and economy.

Rupp, 65, from Altoona, Pa., has been married for 43 years and says she looks to her Bible for advice. The Bible, she says, is clear: Marriage is only for one man and one woman.

Faced with a string of losses in the court and a rapid shift in public opinion in favor of gay marriage, planners of Thursday’s rally aimed to show lawmakers — and especially courts — that they will not give up without a fight.

The rally drew a far smaller crowd than organizers had expected, but law enforcement officials did not give a crowd estimate.

The rally featured upbeat gospel music to excite the crowd, and a string of speakers blasted lawmakers and courts for allowing same-sex marriage in states where majorities of voters had passed constitutional bans against it. An air of defiance dominated the speeches from the likes of former Arkansas Gov. Mike Huckabee and San Francisco Archbishop Salvatore Cordileone.

San Francisco’s Archbishop Salvatore Cordileone addressed the crowd at the 2014 March for Marriage rally on June 19 in Washington, D.C. He attended the event despite protests from more than 80 organizations who objected to his presence.

More than 80 organizations signed a petition asking Cordileone, the U.S. Catholic bishops’ point man against gay marriage, to reconsider attending the event. Cordileone, however, told those who signed the letter that they are misinformed.

“None of these groups (organizing the rally) are extreme or radical or anything like that,” Cordileone said Thursday. “If there were such an individual or organization that was really truly hateful, I wouldn’t be here.”

Several speakers, including Cordileone, referenced the 40-year fight over legalized abortion that started with the Roe v. Wade Supreme Court decision in 1973. Cordileone and others signaled that the fight over marriage could last just as long.

“They will figure out this truth about marriage,” he said.

Elaine and Ray Franco from Virginia Beach, Va., brought their 8-year-old daughter, Maria. Elaine Franco said that it’s important to teach their daughter values and what is important.

“When you take time from your busy schedule to come out for an event like this it shows them that it’s important,” she said. “And if you don’t stand up for your principles, then what are you?”

A handful of gay marriage supporters also rallied at the Capitol.

Amy Joslin and Mandy Roach drove eight hours from New England to show support for gay rights. Joslin, from Massachusetts, held a sign that said “love is love,” and Roach, from Rhode Island, danced behind the key speakers.

Joslin isn’t worried that the march will shift the momentum against same-sex marriage, but she did want to show people that there is another side to this argument.

“It’s great that they can do their thing, but I also wanted to give my opinion,” Roach said.

Supporters ended the two-hour rally with a march from the Capitol lawn to the front of the Supreme Court, waving signs and cheering.

Rupp said standing up for traditional marriage is important to her because she did nothing when court rulings a generation ago struck down state-sponsored prayer in public schools.

“I will not do that again,” she said.