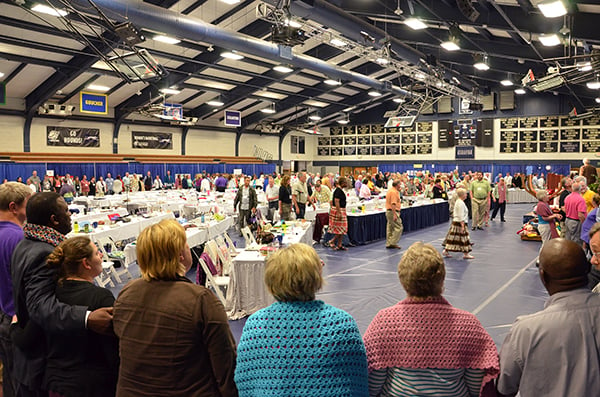 While awaiting the results of the vote, delegates at the 2014 Synod of the Moravian Church Northern Province rise to join one another hand in hand around the assembly hall to sing beloved Moravian hymns.
June 23, 2014
Yonat Shimron

While awaiting the results of the vote, delegates at the 2014 Synod of the Moravian Church Northern Province rise to join one another hand in hand around the assembly hall to sing beloved Moravian hymns.

(RNS) The Moravian Church’s Northern Province approved a proposal to allow gays and lesbians to be ordained and to create a religious ceremony for same-sex couples.

By a vote of 181-62, delegates to the 2014 Synod approved a proposal Sunday (June 22) that also includes provisions to revise the Northern Province’s Book of Order to reflect the changes.

“Moravians understand that God’s call to us is to welcome all people, because God’s embrace is far larger than our capacity to imagine,” said the Rev. Elizabeth D. Miller, president of the Provincial Elders’ Conference of the Moravian Church Northern Province.

This decision affects only those churches in the Northern Province, the largest of the denomination’s three provinces in the U.S. and Canada.

Four years ago, the province's Synod mandated congregational forums for dialogue and prayer about the role of gays and lesbians in the church.

During an earlier session, delegates approved a resolution that affirmed the Northern Province’s commitment to be inclusive of differing views regarding gay and lesbian ordination. 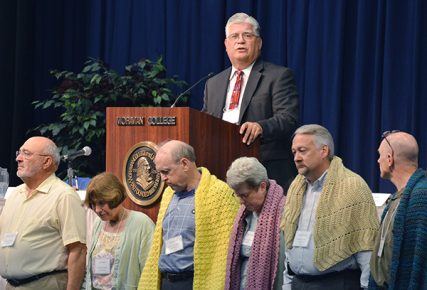 Rick Santee, chair of the 2014 Synod of the Moravian Church Northern Province, delivers the result of the vote to Synod delegates.

The Moravian Church was founded by Jan Hus, who was burned at the stake in 1415 for his criticism of the Roman Catholic Church.

Moravians, as they are called because of their origin in the Moravia and Bohemia regions of the Czech Republic, arrived in America in the early 1700s and built their first permanent settlement in Bethlehem, Pa.

“We know that there are Moravians who deeply love God, who honor the authority of Scripture and love the Moravian Church who do not agree with this resolution,” said Miller. “It is my prayer that as Moravians, in relationship with one another, we can continue to walk together in love, even as we acknowledge our differences.”

The worldwide Moravian Church consists of 21 provinces with more than 1 million members, half of which live in Africa.