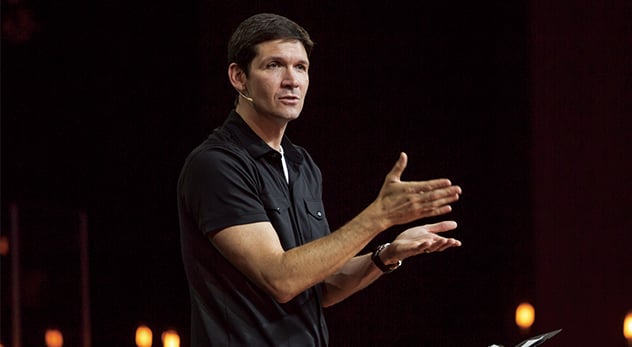 Many believers get burnt out on faith, exhausted by efforts to “work harder” to be holy. But mega-church pastor Matt Chandler says this is neither necessary nor possible.

Pastor Matt Chandler wants Christians to take a breather. Many believers get burnt out on faith, exhausted by efforts to “work harder” to be holy. But Chandler says this is neither necessary nor possible. Instead of straining towards holiness, he encourages the faithful to simply fix their eyes on Jesus.

Chandler has been leading The Village Church in Dallas/Fort Worth since 2002, during which time the congregation grew from 160 people to over 11,000 with campuses across the city. He also serves as president of Acts 29, a church planting network with more than 500 congregations around the world. Here, we discuss his view of redemption and how it applies to contemporary issues such as substance abuse and serial failure.

RNS: In my experience, redemption for evangelicals means “work harder,” do more good stuff, and stave off bad behavior. But this isn’t your message, is it?

MC: No, because redemption isn’t you working harder. Redemption is you having been saved from your error by someone else. In fact, you don’t possess the ability to redeem yourself in any way. This is the great lie of moralistic deism, that you can be good enough. Men from the Bible–from the prophet Isaiah to Jesus’ teaching on the Sermon on the Mount–teach that you cannot be righteous enough to save yourself. One of the more terrifying verses in the Bible is when Jesus said to a crowd, “Unless your righteousness supersedes the Pharisees, you have no part of the Kingdom of Heaven.”

The Pharisees were tithing their mint and dill and were more righteous, externally speaking, than anyone reading this has even tried to be. Jesus is exposing the truth that you and I will never be good enough, that all of our righteous deeds are worthless. So, this can’t be the message of redemption because the Scriptures are clear that redemption doesn’t work that way.

Image courtesy of Broadman and Holman

RNS: Your book is built on the idea that the gospel is the great “unless” of life. What do you mean by this?

MC: All of us by design and default are pursuing meaning and depth in life. But our pursuits almost always lead to a type of slavery “unless” the gospel invades and straightens those pursuits. For example, if I believe the lie that a better version of me will solve all of my problems, I become a slave to trying to be more disciplined, harder working, better looking, more charismatic. The gospel grants us rest in our identity as justified, adopted children of God. Transformation then proceeds from our new found identity and rest.

RNS: How has the church lost the beauty of redemption?

MC: I think the church loses the beauty of redemption the moment we think there is no more sin, no more error, to be redeemed from. I think Christian history will show that, the moment we remove the atoning work of Jesus Christ from the equation, the moment preachers are motivational or inspirational speakers, rather than the heralders of the good news of Jesus Christ, you lose redemption all together . . . because there’s nothing to be redeemed from.

RNS: A lot of churches have difficulty helping people with substance abuse. How can the ideas of your book help them do a better job?

MC: When it comes to substance abuse, there are two core things we want to encourage churches and Christians to do. First, create space where people can be honest about their addictions. Second, create space where we can dig around in the heart to see what led to it. Ultimately, what we’re wanting to see is Christ work in their hearts and become most valuable in their eyes and minds so the craving is not for the abuse or the substance, but for Christ Himself. This usually takes a while, although we’ve seen it be miraculous. Christians should faithfully walk with people in strong community while encouraging toward godliness. We want them to get their eyes on Jesus.

RNS: What do you do with serial failures–those people who want to be better and do better, who commit and submit to the gospel over and over, but keep falling off the horse? How do you respond to those who crave and even chase after redemption, but never seem to change?

MC: I do think Christians get stuck in their walks with God. I think this is because somewhere along the way they take their eye off of the ball, the ball being the personal relationship with Jesus Christ, and instead begin to focus on something else. Colossians 3 says that we first fix our eyes on Jesus; we fix our eyes where He’s seated in the heavenly. We fix our eyes and our minds on where He is, then we put to death what is earthly in us. Then we’ve got that long list of what the earthly things are in us starting in verse 5. I think the way Christians get stuck is somewhere along the way we no longer fix our eyes on Jesus, but instead say, “Let me put to death this thing.” At that moment, you’ve taken your eyes off of where the power and ability to put things to death actually comes from.