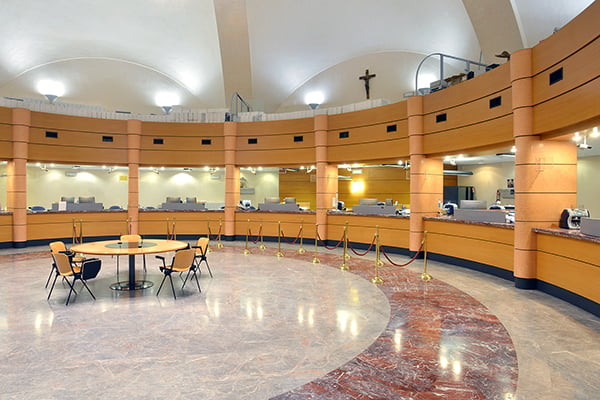 The Vatican Bank is housed in the Bastion of Nicholas V in Vatican City. The space was formerly used as a papal prison. Profits at the bank, formally known as the Institute for the Works of Religion, have decreased from 86 million euros in 2012 to 2.9 million euros last year after extensive internal reforms.
July 8, 2014
Josephine McKenna

The Vatican bank is housed in the Bastion of Nicholas V in Vatican City. The space was formerly used as a papal prison. Profits at the bank, formally known as the Institute for Religious Works, have decreased from 86.6 million euros in 2012 to 2.9 million euros last year after extensive internal reforms.

VATICAN CITY (RNS) Profits plunged by more than $100 million at the Vatican bank last year after thousands of accounts were shut down in a radical overhaul of the scandal-scarred institution.

In its 2013 annual report released Tuesday (July 8), the bank, officially known as the Institute for Religious Works, said its net profit totaled 2.9 million euros ($3.9 million) last year, a dramatic drop from the 86.6 million euros ($117.8 million) it reported in 2012.

The bank said the slump was due to extraordinary expenses, losses related to externally managed investment funds and fluctuations in the price of gold.

Losses included a controversial $20.5 million loan granted to a production company owned by a friend of Cardinal Tarcisio Bertone, the former Vatican secretary of state who has faced criticism for mismanagement as the church's No. 2 official under retired Pope Benedict XVI.

In recent years, the bank has faced increasing pressure from European officials and the Bank of Italy to shed its reputation as an offshore haven and to adopt international guidelines designed to prevent money laundering and terrorist financing.

The bank said it has stepped up transparency and moved to restrict account access to Catholic institutions and clerics, Vatican employees and embassies and diplomats accredited to the Holy See in a bid to tighten control.

"I repeatedly said that I would proceed with zero tolerance for any suspicious activity,” bank President Ernst von Freyberg said in a statement. “We have carried out our reforms in this spirit.”

The bank released the new figures amid speculation that its board will be restructured and von Freyberg will be replaced on Wednesday. French businessman Jean-Baptiste de Franssu is expected to succeed von Freyberg; both men are due to attend a news conference with the Vatican’s economic overseer, Australian Cardinal George Pell.

“This is a time of major change in the Holy See, not only for the (bank). With the support of the Holy Father and the Council of Cardinals, we are creating simpler, more efficient structures for those serving the mission of the Catholic Church,” Pell said.