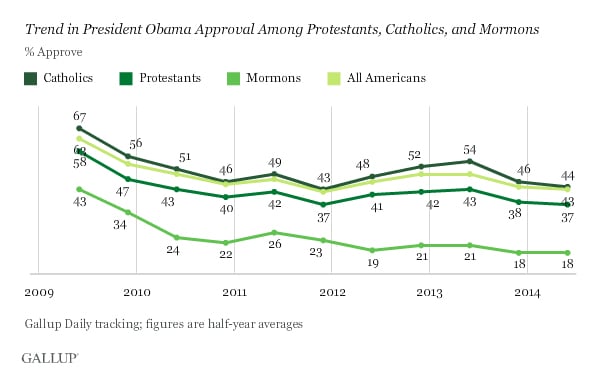 Obama ranks lowest among Mormons, according to a new Gallup poll.

(RNS) Most Christians don’t approve of President Obama right now, but he gets high ratings from Muslims and other minority religious groups.

It’s not because of their religion, though.

The newest Gallup tracking poll shows the president’s approval rating in June averaged 43 percent for Americans overall. However, his ratings sank with Catholics to 44 percent, down from 54 percent in June 2013.

In that time frame, most Protestants’ already low approval for the president slid to 37 percent from 43 percent. And Mormons, never big fans of Obama, gave him a 21 percent approval last summer and that’s now about statistically level at 18 percent.

Even groups historically inclined to approve of Obama registered a dimmer view of him since June 2013:

— No religious identity, down to 54 percent from 61 percent.

“It’s interesting to see that there are differences among the religious groups although they are not affected differently by what he does,” said Jones.

Indeed, the overall order of religious groups’ relative approval rating for Obama has not changed since his first inauguration in 2009, according to Gallup surveys.

“By and large, at this point in his presidency, people know if they like him or not although there can be movement around the margins,” said Jones.

The good feelings from Obama’s re-election year have dissipated in the face of recent serious challenges, the pollster said.

“The perception is that a lot is not getting done on the major problems the country is facing,” said Jones.

Jones said the real driver in approval ratings is not religion; it’s political affiliation. A religious group’s political tilt will shape its views more than Obama’s policies and actions. Mormons, for example, are largely Republican, hence their low approval rate of the president.

The results are drawn from aggregating 88,000 Gallup Daily tracking interviews. The margin of error varies by subgroup.