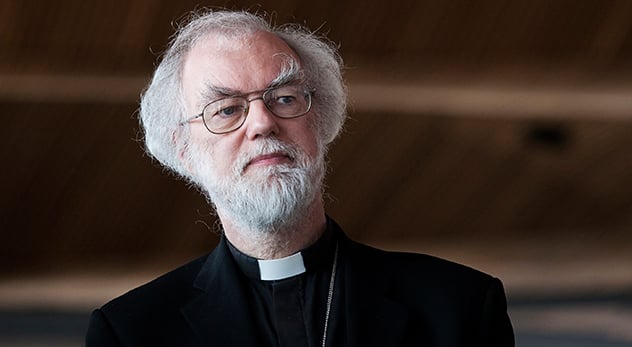 Former archbishop of Canterbury shares what he believes are the four essentials for “being Christian.” – Image courtesy of the National Institute of Wales (http://bit.ly/TwvCxY)

Rowan Williams always seemed to attract controversy when he led the worldwide Anglican communion as Archbishop of Canterbury. He spoke out against his own government twice. He tried to hold together a church splintering over teachings on homosexuality while his personal views seem more aligned with the minority. He even got the infamous atheist Richard Dawkins to admit he was only “6.9 percent out of seven” certain God doesn’t exist.

After his retirement in 2012, Williams sought out a less controversial existence. His newest book, “Being Christian: Baptism, Bible, Eucharist, Prayer,” attempts to avoid scandal by simply discussing what Williams believes are the four essentials to following Jesus. Here we discuss baptist, the Bible, gay marriage, and whether he is creating another standard for judging who is and isn’t a Christian.

RNS: You’ve written a book on “being Christian.” Is this one more measuring stick for people to determine who’s in and who’s out or is there more here than meets the eye?

RW: No agenda about who’s in and who’s out; the book began simply as a series of talks in Canterbury Cathedral for anyone interested in exploring the basic components of Christian practice as it’s usually understood. A resource, I hope, but not an examination paper.

RNS: You open with baptism, noting that “people are formally brought into the Christian community by being dipped in water or having water poured over them” but then you go on to say that the word “baptism” originally just meant “dipping.” Is there a single acceptable way for Christians to baptize?

RW: I don’t think there is a single acceptable way, but the symbolism of getting seriously wet is what matters. I’m not sure I like the custom in some communities of just applying a moist palm.

RNS: You list Eucharist as an essential, but many of congregations take communion only a few weeks a year. Are they, in your view, not being fully “Christian”?

RW: As I said, I have no interest in giving examination marks to denominations on this. You can have a very strong doctrine of the Eucharist and not celebrate frequently. What seems odd to me is Christians who simply don’t think about it or even treat it as almost an embarrassment.

RNS: Before your enthronement as Archbishop of Canterbury, you said you could “see a case” for acknowledging same-sex relationships, but you didn’t address this issue much during your tenure. What do you now believe is the way forward?

RW: Archbishops don’t decide doctrine, and in a church where the majority holds a more traditional view, an archbishop has to respect that. I still see a strong case for a less restrictive approach, on the grounds that what the Bible condemns isn’t necessarily what we today recognize as same-sex partnership.

I said when I was appointed that what I hoped and prayed for was a patient and careful debate, respectful of the experience of gay and lesbian people. And I hoped and prayed for us to be able to move forward together. The often-vitriolic polarization that has accompanied the debate has been a matter of much sadness to me.

RNS: Somewhat related, much has been said about the rift between the American Episcopal Church and more conservative sectors of the Anglican Communion. Are you concerned?

RW: These differences concern me deeply and handling them took a great deal of time and energy and prayer. It’s difficult when both sides are convinced that they are under a real imperative from the Holy Spirit to act as they do. But shouldn’t we be a little surprised—even a little worried—that this issue has become the all-important one that divides Christians? As if it mattered more than the Godhead of Christ or the relation of grace and freedom or how we do justice to the poor? What does it say about our priorities?

RNS: You list the Bible as one of the essentials of “being Christian” but various people have diverse views about the Bible. Do you think every view of the Bible is equally “Christian” or is there some baseline?

RW: It’s always been true that Christians have had differences over reading the Bible. But it remains the text we have in common. And so long as one believes that the Bible is a gift from God and tells us what we need to know about God for our well-being here and hereafter, it’s still possible to think we have something seriously in common.

Things get difficult if you hold that the Bible is only a human product; but they also get difficult when the Bible is treated only as a set of timeless instructions from God, irrespective of the actual process by which the texts arose. The Bible needs to be read, prayerfully and discerningly, in the company of as many other believers as possible, so that we can learn some wisdom from each other as to what exactly God does want to tell us. Hearing the truth in Scripture means expecting the Holy Spirit to be at work both in the text and in the community that reads it.