(RNS) When he was a student at Brigham Young University three years ago, Anthony Willey came across a Wikipedia page on Mormons. What he read filled him with frustration. 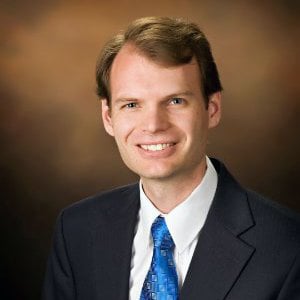 Anthony Willey is a Wikipedia administrator and a 2012 graduate of Brigham Young University.

The article focused on polygamy, which seemed odd since Mormons officially outlawed the practice in 1890. “It didn’t say what Mormons believe or what made them unique,” Willey said. “I had the thought, ‘Who’s editing this stuff?’ and that got me hooked.”

Since editing that page and adding 50 percent to the content, Willey has made more than 8,000 edits to the editable online encyclopedia, mostly on articles related to Mormonism. His top edited pages include entries on Joseph Smith, Mormons, Mormonism, and Black people and Mormonism.

The problem confronting many Wikipedia editors is that religion elicits passion — and often, more than a little vitriol as believers and critics spar over facts, sources and context. For “Wikipedians” like Willey, trying to put a lid on the online hate speech that can be endemic to Wikipedia entries is a key part of their job.

Religion is among several of the top 100 altered topics on Wikipedia, according to a recent list published by Five Thirty Eight. Former President George W. Bush is the most contested entry, but Jesus (No. 5) and the Catholic Church (No. 7) fall closely behind.

Islam’s Prophet Muhammad (No. 35) and Pope John Paul II (No. 82) are included, as well as all manner of religions, including Jehovah’s Witnesses, Islam, Christianity and Scientology. And countries and topics with religious sensitivities are also controversial, including global warming and Israel.

Wikipedia is the fifth most-trafficked website on the Internet and its complex policies and regulations — more than 50 of them — for editing the open-source site total nearly 150,000 words (thick enough for a book).

Religious topics are one of the top 100 most frequently vandalized on Wikipedia. The site’s users define vandalism as “any addition, removal, or change of content, in a deliberate attempt to compromise the integrity of Wikipedia.”

Any registered user can create an entry on Wikipedia, a collaboratively edited encyclopedia. Volunteers write Wikipedia’s 30 million articles in 287 languages.

Willey, 29, is now a Wikipedia administrator, which gives him more administrative privileges within the volunteer-driven website. The physics graduate is looking for full-time work, so his editing is only an occasional side project. And it’s only partly driven by his faith.

“I don’t edit as an agent of my religion,” Willey said. “I’m not going out of my way to promote a certain point of view. I am motivated by when people say things that aren’t true.”

It could be tempting for Wikipedia editors to portray their own faiths in the best light, or for people outside of the faith to paint a negative picture. In 2009, Wikipedia banned people using the Church of Scientology’s computers and some of Scientology’s critics from changing Wikipedia articles about Scientology. Wikipedia said members of the church and some critics engaged in “edit wars” by adding or removing complimentary or disparaging material.

“The worst casualties have been biographies of living people, where attempts have been repeatedly made to slant the article either towards or against the subject, depending on the point of view of the contributing editor,” a committee wrote in its decision to ban users.

Some users might go out of their way to portray a religion in a bad light. Several years ago, a user who went by the name Duke53 attempted to ensure Mormonism’s sacred undergarments got as much exposure as possible — it’s not a topic the church generally likes to discuss. He added images to as many articles as possible, including to Wikipedia articles such as “Clothing” and “Church etiquette,” regardless of whether the images were relevant.

When Willey edits an article, he says, he avoids inserting opinions and instead uses a trusted source, such as Richard Bushman, a respected emeritus historian at Columbia University.

“Even if I don’t agree with something in his book, for the purposes of editing Wikipedia, it keeps me honest,” Willey said. “It makes it very hard for people to argue with me because when it comes to editing something on Wikipedia, it all comes down to who has the best source. If I’m promoting the view of the best source, I’m always right.”

He will occasionally edit pages on other religions, such as Islam or Baha’i, or general articles on Christianity. “Nobody likes to be misrepresented,” he said.

Those who engage in outright hate speech are dealt with swiftly and blocked, but combating more subtle hate speech can be tricky.

“If somebody’s abiding by the rules, it’s hard to block a contributor who’s writing an article if they’re ambiguously promoting something,” Willey said.

Roger Nicholson was on the same path as Willey, editing Wikipedia pages related to Mormonism for two years to experience what the editing was like. His story, featured in the Deseret News, ended after he decided all the “edit wars” weren’t worth the headaches.

“It’s kind of like the Wild West of the Internet,” said Nicholson, who works with a group called FairMormon instead. “You could spend days and accomplish the change of a few sentences and that was it.”

Among the Wikipedians, a large percentage self-identify as atheists, followed by Christians, Muslims, Pastafarians (devotees of the farcical religion of the Flying Spaghetti Monster) and Jews.

Most of the edits to Wikipedia articles, especially ones on religion, are made by men, according to a 2011 study by the University of Minnesota. Women accounted for just 7 percent of the edits on religion articles.

John Carter, a 51-year-old office worker in St. Louis who is Catholic, will sometimes help edit more controversial pages, including ones on Scientology, Martin Luther and Wikipedia’s list of new religious movements.

Many of the smaller religious groups have editors who are deeply passionate about them, but some smaller religions that aren’t as appealing to Westerners (including Native American or Central Asian American traditions) are covered less well, Carter said.

“An enemy (or friend) of a ‘cult’ in Ecuador could find sources supporting their personal positions and the obscurity of the topic in English will make it hard or impossible for most of us to confirm or deny,” Carter said.

Carter, Willey and other editors discussed editing religion pages in a Q-and-A with Wikipedia last year where an editor with the user ID Sowlos said there was quite a bit of overlap between religion and mythology on the website.

“If a mythology is a sacred narrative or collection of traditional stories, then all religions include mythologies as integral constituents of what they are,” Sowlos wrote. “However, many people feel uneasy referring to stories from their respective religions as ‘mythology’ for fear that it will be interpreted as indicating a lack of factual integrity.”

Using Wikipedia’s rules, Carter says, religion can be difficult to independently verify, especially when there’s a range of opinions about what events took place and what they mean.

“No one has any real evidence that Jesus rose from the dead or not — how do you give the various opinions balanced coverage? And was he God, or a god, or something else?” Carter said. “Even nominal Christians disagree on those and several other significant topics.” 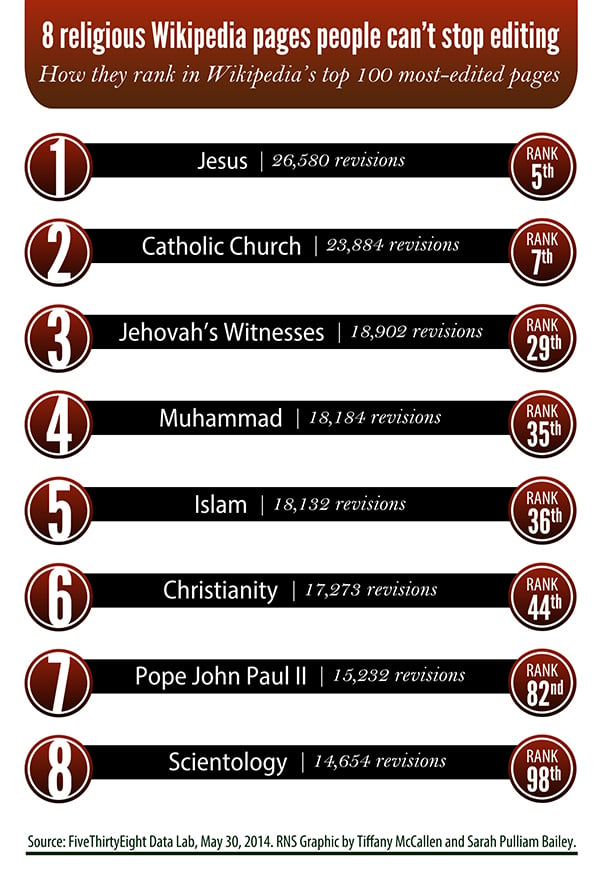 Subscribers, download a high resolution version of this graphic here.