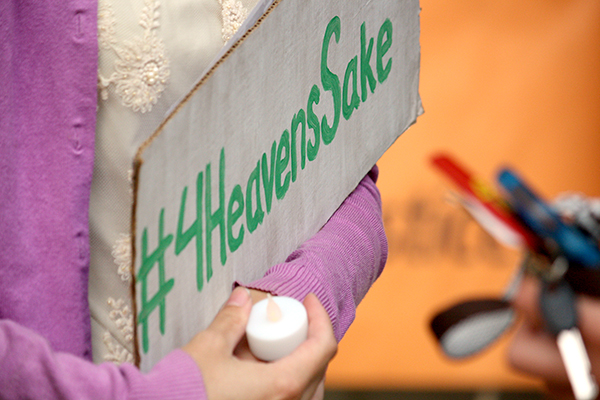 Tricia Bruckbauer, coordinator for Creation Justice Ministries, holds a candle and a sign that shows the hashtag often used by her organization and others when referencing the Environmental Protection Agency and climate change.

In addition to the public hearings Tuesday and Wednesday (July 29-30) in Washington, the EPA held similar meetings this week in Denver, Atlanta and Pittsburgh.

The Rev. Richard Cizik, a longtime evangelical environmental activist, and other faith leaders see the Clean Power Plan as the first step toward a moral and comprehensive response to climate change.

Testimonies were coordinated by three groups: Creation Justice Ministries, the Washington-area chapter of Interfaith Power and Light and the progressive evangelical group Sojourners. 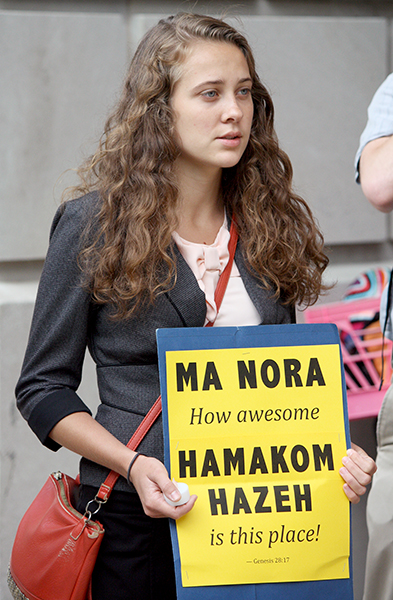 Emily Wirzba, program assistant for energy and environment, held a sign to help people with the words as they sang in Washington, D.C., on July 29, 2014.

As the hearings kicked off Tuesday, activists met outside the EPA for a multifaith blessing. Joelle Novey, director of IPL’s Washington-area chapter, led the group in singing “Ma nora hamakom hazeh,” Hebrew for “How awesome is this place!”

The blessing ended with a prayer for the “process and for those providing witnesses to the importance of the EPA’s rulemaking.”

Cizik, president of the New Evangelical Partnership for the Common Good and a former Washington director for the National Association of Evangelicals, spoke about the effects pollution has had on his family. His son, John, was diagnosed with asthma seven years ago.

“On one occasion, before we really understood what was happening, he woke up in the morning unable to breathe,” Cizik said. “It’s the kind of frightening experience a parent never forgets.”

Since then, Cizik has worked to understand the effects of climate change that he says caused his son’s asthma attack. He said regulating power plants and the EPA’s Clean Energy Plan are essential for reducing the kinds of pollution that most scientists blame for climate change.

“I have been called by God to speak out on these issues and believe as an evangelical Christian that we must be stewards of God’s creation,” Cizik said. “And it seems abundantly clear to me that the EPA’s Clean Energy Plan is a much-needed tool for delivering on this duty.”

In addition to Cizik, various governors, environmental organizations and the public spoke in support of the Clean Power Plan.

Ashley Goff, minister for spiritual formation at Church of the Pilgrims, a Presbyterian congregation in Washington, talked about her church’s “Sacred Greens” urban garden.

She said that on Sundays, the garden is filled with hungry homeless people harvesting vegetables, just one way her church is taking care of its patch of the Earth. The EPA’s role, she said, is to regulate and care for the rest of the country.

She asked the EPA for a long-term vision, because, she said, a short-term vision won’t provide the planet with overall well-being.

While support for environmental protection runs deep in the religious community, not everyone agrees with the White House’s proposed rules. Scotty Dingess, pastor of West Logan Church of God in West Logan, W.V., opposes the EPA’s Clean Power Plan.

He said there hasn’t been any change to the environment near his church but people have begun to lose jobs. There are already regulations in place that control the local coal mining industry, Dingess said.

He added that people come from all over to go on the local ATV trails, hunt, fish and float down the area’s rivers and streams. Coal mining “affects nothing as far as our atmosphere,” said Dingess, who did not attend the Washington hearings.

Cizik asked skeptics of the EPA’s plan to listen to or read the testimonies from faith leaders such as Goff.

He said many opponents are unaware or are in denial about climate change, and he is afraid that could have a lasting impact. He said he looks to a line from the Gospel of Mark, “Master, let me receive my sight,” as a prayer for this issue.

“The answer to this prayer would be to pay attention, to become aware, to be mindful, to develop a certain kind of consciousness about the real impacts of carbon pollution,” Cizik said.

News
Nationalism ‘must not prevail,’ Pope Francis says, addressing the United Nations
Opinion
Whipsawed by 2020
Opinion
Faith and politics mix to drive evangelical Christians’ climate change denial
Opinion
Building interfaith community at work
News
600 faith leaders sign letter urging California governor to stop transfer of incarcerated people to ICE
© Copyright 2020, Religion News Service. All rights reserved. Use of and/or registration on any portion of this site constitutes acceptance of our User Agreement and Privacy Policy, Privacy Statement and Cookie Notice. The material on this site may not be reproduced, distributed, transmitted, cached or otherwise used, except with the prior written permission of Religion News Service.