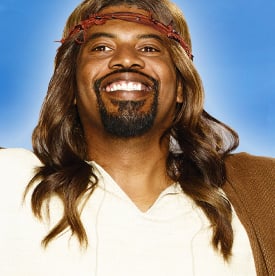 (RNS) A lot of people have their crosses in a twist over "Black Jesus," the new satire from Aaron McGruder airing on Cartoon Network's Adult Swim series. Yes, he swears. Yes, he smokes something illegal in 48 states. Yes, he goes on a drug run. But "Black Jesus" is nothing new -- Jesus has been black and satirical and shocking before.

Black Jesus is almost 200 years old. In his 1829 "Ethiopian Manifesto," preacher Alexander Young depicted a black Jesus come to rescue America's slaves, and in the 1890s Henry McNeal Turner, an African Methodist Episcopal bishop, declared, "God is a Negro." But the most enduring version from this time is in 1852's "Uncle Tom's Cabin," by Harriet Beecher Stowe. As Richard Wrightman Fox says in "Jesus in America," Uncle Tom was so saintly, "he was Christ himself reborn as an outcast American."

Norman Lear got people hot under their clerical collars when his "Good Times," the African-American-focused sitcom, had son J.J. paint the local wino as a black Jesus. When J.J.'s father hung the painting on the wall, money and "miracles" started to flow. Hailed at the time as both ground-breaking and blasphemous, the episode was actually a sly social commentary on the prosperity gospel -- pray for wealth and health and you'll get them. "Black Jesus" opens with a similar theme, as a homeless man greets Jesus and asks for winning lottery numbers. Jesus doesn't provide. "Come on man, you can do better than that," he says.

The 'Splainer's father will not watch 1979's "Monty Python's Life of Brian" -- too sacrilegious, he says. It's about a young Jewish man born on the same day in a stable next to Jesus' manger -- suffice it to say hijinks ensue. Best line, from Brian's mom: "Now you listen here! He's not the Messiah. He's a very naughty boy!" Whole countries banned the film, and Python members had to defend the film on the BBC. Today, it's a cult classic. 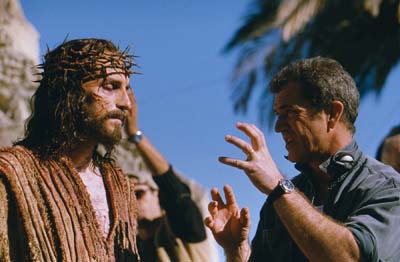 You remember Mel Gibson's "The Passion of the Christ," the bountifully bloody depiction of Jesus' last days?  That movie featured a white Jim Caviezel as Jesus, albeit with a fake nose to make him look more, um, Semitic. Betcha don't remember "The Color of the Cross," a low-budget 2006 film with Jesus as a black man, played by Jean Claude LaMarre. Gibson's film earned a bajillion dollars; LaMarre's, not so much. The New York Times said it "makes a big deal out of the relatively tame suggestion that Jesus was black." (HT: Urban Faith)

Jesus -- both black and white versions -- has popped up in multiple "Family Guy" episodes, created by atheist Seth MacFarlane. This Jesus has hit on women, burned down bars and made his escape in a Cadillac Escalade. And let us not forget the recurring Jesus of "South Park." This Jesus tries to rescue Santa Claus -- captured by Iraqi insurgents -- watches porn with Buddha, and most impressively, keeps the Catholic League's Bill Donohue from becoming pope. On the more serious side, at the turn of the millennium, National Catholic Reporter held an art contest called Jesus 2000. The winner -- a black Jesus who was also a woman. Cue the outrage.

McGruder's "Black Jesus" lives in a broken-down Ford van on the streets of Los Angeles' traditionally black and notoriously poor Compton. He changes water into cheap cognac, hogs the blunt and passes a 40 (look them up -- I had to). He also gets arrested -- and abandoned by his crew. Sound familiar? There is a lesson here even theologians appreciate. "You do realize I died for your (major &%#@ deleted) sins," Black Jesus asks his followers -- all just as down-and-out as he is. "Oh, that s**t is getting old," one replies.

As history shows, so will the shock value of "Black Jesus."