Yesterday, Elder Russell M. Nelson of the LDS Quorum of the Twelve Apostles spoke at the BYU summer commencement, making the defense of traditional marriage a key theme.

Elder Nelson told graduates and their families that they would have many opportunities to defend “the Lord’s side” in debates about marriage. “Disciples of the Lord are defenders of marriage,” he said. “We cannot yield.”

You can watch the commencement ceremony here (Elder Nelson speaks at the 39-minute mark), or read a summary at the Mormon News Report or the Provo Herald.

Elder Nelson noted that defending traditional marriage between a man and a woman would not be an easy road for disciples of Christ. We will be put to the test. Life will not be comfortable, especially when the one-man-one-woman definition is called into question by the world. Marriage was not created by that world, by “human judges or legislators . . . think tanks or by popular vote, or by oft-quoted bloggers or pundits. . . . Marriage was created by God.”

I agree with much of what Elder Nelson said about marriage in general. It is the foundation of a happy and enduring family life. It’s a partnership of shared goals, mutual loyalty, and the cultivation of each individual’s gifts. The family can be eternal.

Yes to all those things.

But I cannot agree with his unyielding determination to restrict the institution of marriage to a man and a woman only.

Nor can I abide the us-versus-them mentality that I sense here, pitting LDS Church members as sacred remnants in a world gone bad. Elder Nelson even goes so far as to quote Paul about the last days in which how blasphemers, lovers of pleasure, disobedient boasters, and the prideful will appear to carry the moment while lovers of Jesus Christ suffer persecution.

At the end of the talk, after Elder Nelson has spoken strongly against gay marriage (and subtly conflated that form of committed marriage with pornography, adultery, and sexual sin), he goes out of his way to remind listeners to treat gay people with “malice toward none, with charity for all.”

We are to value them as children of God, as our brothers and sisters, while resisting “efforts to change divine doctrine. It is not for man to change.”

In other words, Elder Nelson recommends that we do everything in our power to deny LGBT people their civil right to marriage; emphasize at every opportunity that their relationships are an abomination in the eyes of God; and then reassure them that for all that, they’re probably really nice people and we just love them so much.

Obviously, I disagree with Elder Nelson’s approach to this issue. Same-sex marriage is not a threat to traditional marriage but an expansion of its definition.

To subscribe to the Flunking Sainthood blog and receive an email alert about new blog posts, sign up at right. 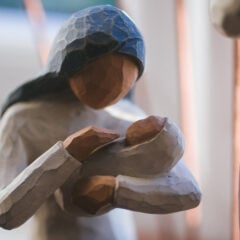