This guest column is written by Dr. Anthony B. Pinn, the Agnes Cullen Arnold Professor of Humanities and Professor of Religious Studies at Rice University and a leading scholar of black nontheism.

(RNS1-aug14) Left to right, Keith Lovett, Melik Smith, Victoria Smith, Linda Smith and Antonio McDonald, hold candles during a gathering of people at the QuikTrip in Ferguson, Mo., on Thursday (Aug. 14). For use with RNS-FERGUSON-VIGIL, transmitted on August 14, 2014, Photo By David Carson, courtesy of St. Louis Post-Dispatch.

The details are still coming out, but it appears to represent another episode of deadly policing that targets black male bodies. Anger, protest, and calls for change have followed.

I’m troubled by the taking of yet another black life, but I’m also baffled: Why are some people, including many atheists, so surprised by the tragedies of racial violence—as if the United States hasn’t had a steady diet of discrimination? And why aren’t more humanists and atheists speaking out?

As Cornel West and W. E. B. Du Bois before him noted, race matters. It is a matter of willful ignorance to think otherwise; to deny the continued existence of racial hostility is a marker that one is out of touch with life in the U.S.

Sure, there are ways in which theological arguments can distract people from the harsh realities of life and blind some to the dynamics of racial discrimination. But theists aren’t the only ones who sometimes fail to grapple seriously with the consequences of racial dynamics in the U.S. Too many atheists and humanists assume their appeals to reason and logic are a prophylactic against racism.

This is a mistake—a bad mistake. Behind the humanist hero Thomas Jefferson was a host of dehumanized, enslaved Africans.

Humanists often claim to be informed, frequent readers, and more intelligent than theists—so the common mantra of  “I just don’t know much about African Americans” doesn’t work. Those who make this claim in a society marked by easy access to information should be embarrassed by such intellectual laziness.

The humanist’s call for a reasonable world should presuppose the dismantling of racism (and of course other forms of injustice). But all too often, humanists—and I say this as a humanist—are simply content to tackle issues of science education, separation of church and state, and a variety of similarly arranged policy issues. Meanwhile, many theists are at the forefront of anti-racism work. As a whole, humanists have some catching up to do.

While science education and separation of church and state are important issues, there is no way around the impact of racial discrimination and bias in the framing of this country—and this includes the presence of the racialized sensibilities that undergird so many of the issues dear to humanists.

More than lip service is demanded, and humanist invitations to racial minorities to speak on race issues is a weak effort. We must do more—or stop talking about fostering a more reasonable society.

While humanists may not be able to eradicate racism, the humanist movement is equipped to do more to expose racism and to limit the reach of racism. And here is a hint: this work must involve more than pointing fingers at theistic organizations and their doctrines, and it has got to entail more than the occasional venture into “their” communities.

This all may come across as harsh, but my humanist colleagues and friends should consider it tough love that, I hope, will allow for more impactful efforts related to anti-racism work.

Humanists might begin this process by first cleaning up our “house.” Here are five suggestions for how to do so: 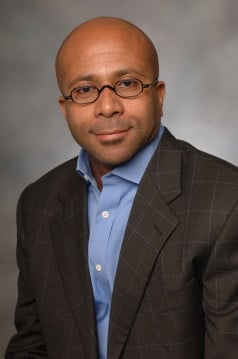 Once humanists have a better handle on these things, we may be in better position to actually make a significant contribution to anti-racism work—and, in this way, challenge the racial brutality that took yet another life, this time in Ferguson.

If humanists value the integrity and dignity of life, the recent death of Michael Brown is a concrete call to take truly reasonable action.

The author and editor of thirty books, Dr. Anthony B. Pinn’s latest is Writing God’s Obituary: How a Good Methodist Became a Better Atheist. A leading scholar and public intellectual, Pinn is the Agnes Cullen Arnold Professor of Humanities and Professor of Religious Studies at Rice University and serves as the director of research for the Institute for Humanist Studies.