This post updates our graph of the political ideologies of American churches and religion. See this post for the graph and further detail on how to read it.

One of the most notable features of last week’s graph religion and politics in the U.S. was the location of Catholics. Readers described it Catholics as being “dead center” or “bullseye.” On both economic policy and social policy, Catholics in the pews are, on average, in the middle of American politics.

Of course, one reason for the location of Catholics is that it is the church is, well, catholic. It is a both large and diverse. Keeping all Catholics together may be a valid decision, but it belies some important religious and political differences within the faith.

Getting to eight types of Catholics 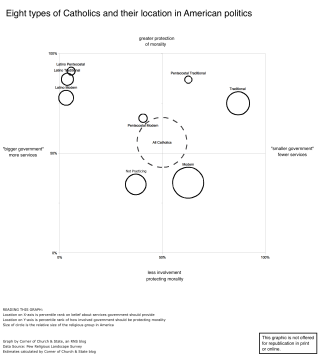 I’ve broken down Catholics into eight types. There’s no magic reason to have nine and not four, six, or a dozen. But these nine are based on several differences we find among American Catholics. In addition to the graph above, there’s a simplified version (click picture on the right) that shows just Catholics without other churches or religions.

Some people are culturally Catholic but are not active in their religion. They were born (and baptized) Catholic and may have been raised Catholic. As adults, however, they do not participate in the life of a local parish.  For my purposes, I used a low bar to place people into the “not practicing” category. Catholics who attend even a few times a year are, at least in this study, considered practicing.

3. Latino Catholics vs. other ethnic Catholics

Latinos are one of the largest ethnicities within the American Catholic church. In many places, they are also one of the most recent immigrants. To be clear: not all Latino catholics are part of Latino congregations. Still, many are, and, for now, they represent a different flavor of Catholicism in America.

4. Pentecostal Catholics vs. other Catholics

Most pentecostals are evangelical Protestants, but there are also many Catholics who are pentecostal. Pentecostalism is a religious movement that emphasizing  the active working of the Holy Spirit in the lives of Catholics, which believed to be manifest in miracles or speaking in tongues. Pentecostal Catholics often participate in services beyond the traditional mass, services that feature contemporary, energetic worship services. Pentecostal Catholics are a growing movement with the Church worldwide, just as they are within Protestantism.

Putting these four divisions together, I can identify eight types of Catholics in America:

Observations from the graph

There’s a lot of information stuffed into this one graph, but here are a few key things we can see:

The range of each dimension ranges from zero to 100. These scores were calculated by calculating the percentage of each religion giving each answer. The percentages were then subtracted (e.g., percent saying “smaller government” minus percent saying “bigger government”). The scores were then standardized using the mean and standard deviation for all of the scores. Finally, I converted the standardized scores into percentiles by mapping the standardized scores onto the standard Gaussian/normal distribution. The result is a score that represents the group’s average graded on the curve, literally.