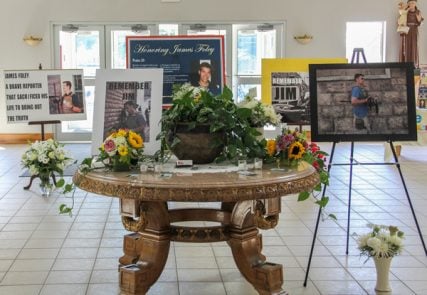 James Foley was Catholic. Steven Sotloff was Jewish. Both held American passports. Both were freelance journalists. Both were beheaded by Islamic State extremists. Neither died for their faiths.

I have chosen not to watch these grisly executions, opting instead to read the transcripts.

Addressing the camera, Foley’s executioner said to President Obama, “This is James Wright Foley, an American citizen of your country…any attempt by you, Obama, to deny the Muslims their rights of living in safety under the Islamic caliphate will result in the bloodshed of your people.”

No mention of Foley’s faith.

Now with Sotloff, a man presumed to be the same unidentified executioner said, “You, Obama, have but to gain from your actions but another American citizen. So just as your missiles continue to strike our people, our knife will continue to strike the necks of your people…”

No mention of Sotloff’s faith.

In fact, it’s unclear whether the Islamic State even knew that Sotloff was Jewish. A fellow captive said he kept his faith secret, feigning illness to fast for Yom Kippur.

David Gibson explains that a Catholic martyr “must be killed explicitly because they are a Christian, or ‘in odium fidei,’ out of hatred for the faith.” The Jewish concept of kiddush Hashem is more complicated, but is often understood to cover anyone killed because they are Jewish.

A spokesman for Sotloff’s family said, “ Steve died a martyr for the sake of God.” Foley’s parents called their son a martyr, not in reference to his Catholic faith, but rather a “martyr for freedom.” I think they’re right.

Religious freedom is certainly at risk under the Islamic State, but these particular executions attacked a different set of freedoms.

The Committee to Protect Journalists wrote in a statement, “Journalists know that covering war is inherently dangerous and that they could get killed in crossfire. But being butchered in front of camera simply for being a reporter is pure barbarism.”

They were killed for their passports and for their professions, not for their personal faiths. Alleging otherwise only serves to politicize and to polarize an already tense situation by stoking new religious tensions.

Let me be clear. Religious persecution is a global crisis. People around the world are being killed for their beliefs. But overblown and inaccurate religious martyr rhetoric only serves to distort these troubling truths.

Last fall, headlines with the phrase “100,000 new Christian martyrs every year” flooded my newsfeed. This cooked figure included Christians killing Christians in the Democratic Republic of Congo and the Rwandan genocide. The grossly exaggerated tally took hold, and I still hear it cited at conferences and in news stories.

Let’s not again fall prey to these politically motivated distortions. Instead, let’s honor Foley and Sotloff as journalists should be honored, by presenting what we know about their deaths with honesty, accuracy and integrity.