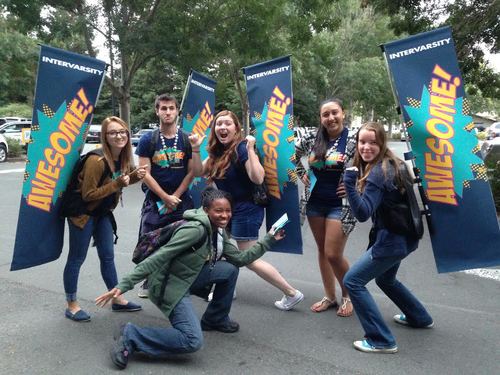 A group of student involved with InterVarsity Christian Fellowship, an evangelical Christian group with 860 chapters in the United States. Photo courtesy of Sonoma State Star

(RNS) A well-established international Christian student group is being denied recognition at almost two dozen California college campuses because it requires leaders to adhere to Christian beliefs, effectively closing its leadership ranks to non-Christians and gays.

California State University, which has 23 campuses, is “de-recognizing” local chapters of InterVarsity Christian Fellowship, an evangelical Christian group with 860 chapters in the United States. The university system says InterVarsity’s leadership policy conflicts with its state-mandated nondiscrimination policy requiring membership and leadership in all official student groups be open to all.

InterVarsity, active in the United States since 1947, has been challenged on more than 40 college campuses, but CSU, with 447,000 students, is the largest to ban it so far. Other schools that have challenged InterVarsity include Vanderbilt University, Rollins College and Tufts University.

The challenges stem from a 2010 Supreme Court decision that ruled a public college can refuse to recognize a religious student organization with an “all-comers” policy if its religious beliefs are effectively discriminatory.

InterVarsity policy states membership is open to all, but leaders must affirm its “doctrinal basis,” which declares belief in “the entire trustworthiness” of the Bible. Many Christians who read the Bible literally also argue it prohibits homosexuality.

Some campuses have reached an agreement with InterVarsity that permit chapters to remain on individual campuses. Ohio State University rewrote its student organization registration guidelines to read, “A student organization formed to foster or affirm the sincerely held religious beliefs of its members may adopt eligibility criteria for its Student Officers that are consistent with those beliefs.”

In a video statement posted to the InterVarsity website, spokesman Greg Jao said the CSU decision means local chapters will lose access to on-campus meeting rooms, student fairs and other official school functions. He estimates the annual cost of covering those losses will be about $20,000 per chapter.

But Uhlencamp said, in effect, the impact will be much less. “We are not disbanding them, they have not been removed from any of our campuses,” he said. “They are just not an officially recognized student organization. They will still have access to meeting rooms, they just will not receive as steep a discount.”

He noted the school’s policy dates to 1972 and is mandated by state law.

CSU originally notified InterVarsity that its policy put it in conflict with university rules a year ago and then gave the group one year to respond. In his video statement, Jao said changing InterVarsity’s leadership policy would undermine its Christian foundation.

“We don’t believe we can affirm a policy that forces us to compromise Gospel faith and Christian integrity without undermining our commitment to help students become real world changers, not just world accommodators,” he said.

LGBTQ Belief and Belonging Around the World
Across vast Muslim world, LGBTQ people remain marginalized
Follow us on Facebook!
Submit your photos to RNS