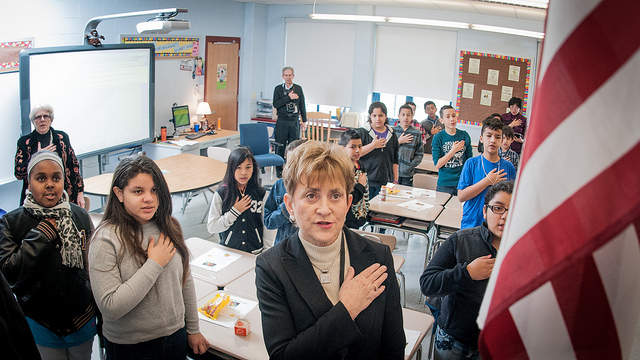 The American Humanist Association launched a campaign Monday encouraging people to sit out the Pledge of Allegiance until the phrase “under God” is removed from it.

“The Pledge discriminates against atheists and others who are good without a god,” AHA’s executive director Roy Spechkardt argues. But non-believers aren’t the only ones put off by the ritual.

FYI to all you uninitiated international readers, most U.S. classrooms start each day with a school-led recitation of the Pledge.

At the morning bell, students rise in unison, face the American flag, place their right hands over their hearts, and proclaim:

“I pledge allegiance to the Flag of the United States of America, and to the Republic for which it stands, one Nation under God, indivisible, with liberty and justice for all.” 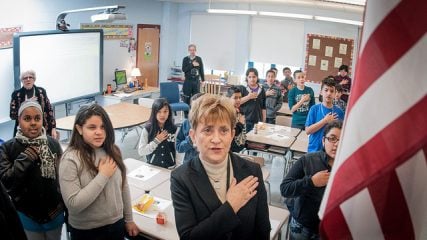 Much of my formative years were spent in England. When I moved to Wisconsin for middle school, I saw the U.S. as an outsider, with the same bewilderment and bemusement I still view much of the world having lived abroad for nearly a decade.

As most of my classmates droned through the Pledge of Allegiance with zombiesque enthusiasm, I examined each word.

The idea of pledging my loyalty to a piece of cloth symbolizing a federation of states under a republican system of government seemed like a big ask. I was only twelve. Students half my age were making the same commitment. Were we really mature enough to take such a hefty oath?

Then came the part about America being one nation under God, indivisible. I understood a nation to be little more than a large group of people with some common connecter. The U.S. is vast and diverse. Surely there was more than one nation in my midst. My faith orientation was in flux, so the God part was tricky. And the word “indivisible” seemed too good to be true.

This young American empire had expanded rapidly, but I’d just learned about the British Empire’s decline. And with all that talk of Texas secession (I mean, it has its own separate pledge…), “indivisible” seemed unbelievable.

That left “liberty and justice for all,” five words I could stand behind.

After all that reflection, deciding not to say the pledge was obvious. But it wasn’t easy.

Students have been guaranteed the right to opt-out of reciting the Pledge since 1943 when the Supreme Court overturned the chant’s compulsory place in American classrooms.

But think back to your tweens. How easy was it to balk at conformity, let alone make a political stand, when everyone else was going through the motions with varying levels of conviction.

Reciting the Pledge may not be legally required in the U.S., but it’s culturally and socially expected. In many communities, the pressure to stand at attention and to conform is strong.

I felt so uncomfortable sitting out the Pledge in one high school class that I opted to drop that subject entirely. The scrutiny from classmates, even more so from the teacher, was more than I was willing to bear. I stood up for my principles by sitting down, but I was an insecure conformity-craving teen just like everyone around me. To opt out of the Pledge without giving myself hives, I opted out of biology. And to think I could have been a doctor…

Ultimately our freedom requires freedom of choice. Freedom of religion and freedom of expression die when we fail to guarantee freedom from coercion and the freedom to remain silent.

So sit down and shut up if you so choose. It’s your constitutional right in America.

For more on the AHA campaign, see Chris Stedman's RNS post "Atheists challenging ‘under God’ need to win hearts, not just minds" and Kimberly Winston's story "Atheists want you to sit down for the Pledge of Allegiance."