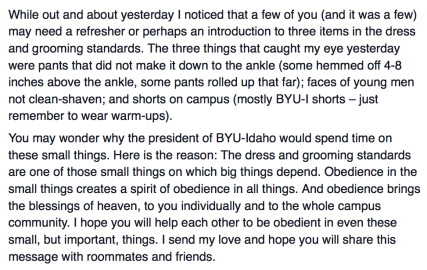 BYU-I has gained a reputation as the most conservative of the various Mormon universities. It’s legendary for “grooming standards” that prohibit even the knee-length shorts and capri pants allowed at other BYU campuses (and in the For the Strength of Youth pamphlet).

Here are three reasons we might want, as a culture, to think more deeply about Mormon dress codes. 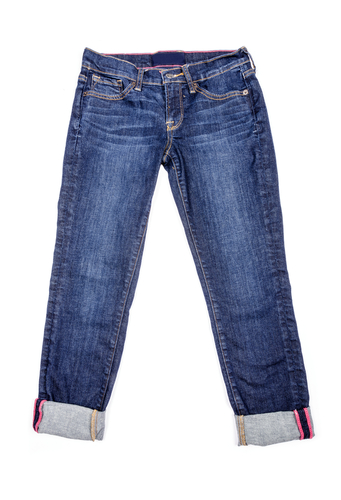 1)   The dress code focuses attention on shallow perceptions of appearance rather than larger Christlike goals like community service or education for the common good. Why are we so fixated on pharisaic details? (What’s the big fetish about ankles, for heaven’s sake?)

“If these dress codes were just silly, if they weren’t doing any palpable harm, then this issue wouldn’t matter so much,” Aaron C. Brown commented on Facebook, a Mormon who graduated from BYU in Provo. “But they ARE doing harm. They’re contributing to the spiritual shallowness of our membership. . . . A not insignificant number of [church members] have been OBSESSED with the clothing choices of both their fellow members and the non-members around them. There are so many worthwhile causes and endeavors they could’ve pursued.”

2) The code emphasizes obedience as the ultimate good, even without providing good reasons for that obedience.

President Clark’s Facebook remarks yesterday echo almost verbatim his 2006 devotional “Out of Small Things Proceedeth That Which is Great”:

Obedience to the small things creates a spirit of obedience in all things, and thus protects against evil and invites the blessings of heaven (p. 34 of student manual).

Yes, there are examples when faithfulness in small matters demonstrates our willingness to be faithful in large ones, as Jesus suggested when he spoke about being good stewards of wealth (Luke 16:10-12).

[tweetable]But enforced conformity to an arbitrary dress standard does not bring with it a guarantee of the blessings of heaven.[/tweetable]

On the contrary, undue focus on levitical concerns such as the precise measurement of exposed flesh between cuff and foot risks creating a people who imagine God as an exacting critic who has little to do with the loving Christ of the New Testament.

It might be good for Mormons to remember that Jesus’ only words about clothes in the entire New Testament were an admonition for us to stop worrying so much about them (Matthew 6).

President Clark asks students to “help each other to be obedient in even these small, but important, things” and to “share this message with roommates and friends.”

I’m reminded of the 2011 news story of a BYU-Idaho student being booted out of a testing center when she showed up in skinny jeans. The student was female, the test center employee male; he made a judgment call that transcended even the university’s own policy, which as subsequently clarified, does not explicitly prohibit skinny jeans.

It may seem that President Clark’s invitation to “share” is not gender-specific, since he certainly doesn’t state that it’s women who need “help” in determining what’s appropriate. But the gendered power dynamics of Mormonism mean that many young men may interpret such statements as giving them carte blanche to pass judgment on the clothing choices of the young women in their midst.

Such an interpretation has been subtly reinforced by the university and the Church; in the 2011 debacle, for example, both institutions responded that the actual standard prohibited clothing that is “sleeveless, strapless, backless, or revealing. It should not have slits above the knee or be formfitting.”

In other words, clothing that deserves particular censure is . . . clothing that might be worn by women. I haven’t seen a BYU-Idaho guy in a strapless dress with a slit above the knee in a long, long time.

But now I know that if I do, I should share with him that his choice is inappropriate, and hope that he exhibits a spirit of obedience about his mistake.