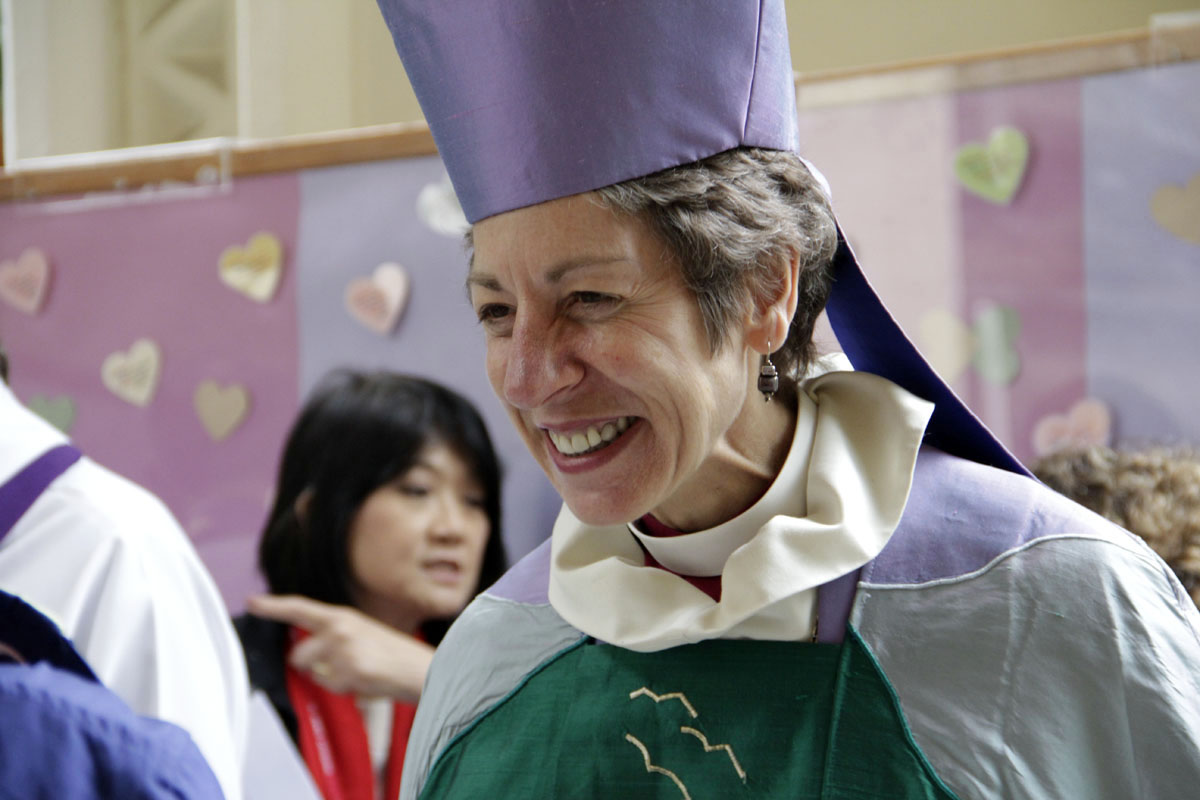 Episcopal Church Presiding Bishop Katharine Jefferts Schori, the first woman elected to head a national branch of the worldwide Anglican Communion, announced Tuesday (Sept. 23) that she will not seek a second nine-year term in office. Photo courtesy of The Episcopal Church

Her departure will likely set off debates over her legacy and the future of the 2 million-member denomination.

"I believe I can best serve this church by opening the door for other bishops to more freely discern their own vocation to this ministry," Jefferts Schori, 60, said in a statement. "I will continue to engage us in becoming a more fully diverse church, spreading the gospel among all sorts and conditions of people, and wholeheartedly devoted to God’s vision of a healed and restored creation."

Her 2006 election was celebrated as a breakthrough for women leadership in the church; delegates sported pink "It's a Girl!" buttons after the vote. She remains the only female primate in the Anglican Communion, but last year the Evangelical Lutheran Church in America followed suit and elected its first female presiding bishop.

Jefferts Schori's current term will end at the conclusion of the Episcopalians' General Convention in Salt Lake City in June 2015. Church membership during her term has dropped by 12 percent, according to the most recent statistics available from the denomination.

Jefferts Schori’s time as presiding bishop has been lauded by theological liberals and bemoaned by conservatives, but both breakaway Anglicans and Jefferts Schori were instrumental to one another’s rise.

Jefferts Schori, a trained marine biologist who previously served as bishop of Nevada, served as the 26th presiding bishop of the Episcopal Church. Some conservative bishops who were planning to exit purposefully voted for her because they saw her as the most liberal candidate. They wanted a strong contrast between the leadership of the Episcopal Church and the leadership of what would become the Anglican Church in North America.

Earlier this summer, ACNA, which broke away from the Episcopal Church in 2009 because of sharp differences over human sexuality and the authority of the Bible, elected Atlanta Bishop Foley Beach to become their new archbishop. ACNA counts 112,000 members in 983 churches across the U.S., Canada and Mexico.

While ACNA has been embraced by conservative Anglican archbishops from Africa, Asia and Latin America, Jefferts Schori received a cold shoulder from many other Anglican leaders, some of whom harbored reservations about her status as a female bishop.

Those affiliated with ACNA led an exodus of theologically conservative Episcopalians under the watch of Jefferts Schori, who upset conservatives with theological statements on things such as salvation. In an interview with Time magazine, she was asked, “Is belief in Jesus the only way to get to heaven?” She replied, “We who practice the Christian tradition understand him as our vehicle to the divine. But for us to assume that God could not act in other ways is, I think, to put God in an awfully small box.”

In 2009, Jefferts Schori denounced "the great Western heresy -- that we can be saved as individuals, that any of us alone can be in right relationship with God," which angered evangelicals and church traditionalists.

Before Jefferts Schori took office in 2006, then-Presiding Bishop Frank Griswold had a hands-off policy on litigation against departing parishes, leaving those decisions to local dioceses. Under Jefferts Schori's leadership, however, the national church spent millions of dollars in litigation against five dioceses in church property fights. In most cases, the national church won.

The controversial election and consecration of the Episcopal Church's first gay bishop, V. Gene Robinson, was in 2003, three years before Schori was elected. Under her leadership, the denomination adopted a provisional rite for the blessing of same-sex unions in 2009 and added “gender identity and expression” to the church's nondiscrimination canons in 2012, declaring that transgender persons could not be excluded from any ordained office of the church on those grounds alone.

She also presided at the 2010 consecration of the church's second openly gay bishop, Suffragan Bishop Mary Glasspool of Los Angeles.

A nominating committee is expected to present the church with five nominees to succeed Jefferts Schori. Likely candidates could include Bishop Ian Douglas of Connecticut, Bishop Shannon Johnston of Virginia and Bishop Michael Curry of North Carolina.

Under church law, presiding bishops must be able to complete a full nine-year term before hitting the mandatory retirement age of 72, limiting candidates to those under age 63 at next year's convention.