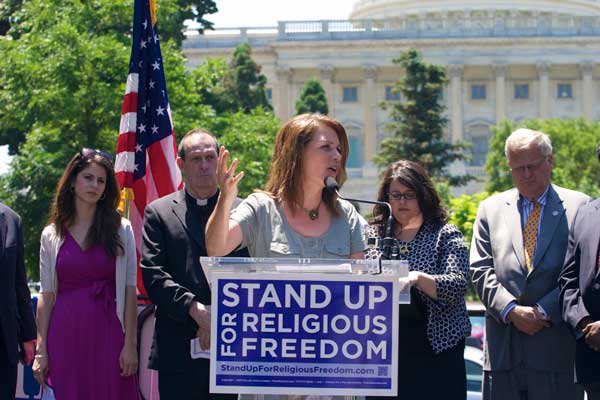 The legal battle over the contraception mandate in the Affordable Care Act became, for evangelicals such as U.S. Rep. Michele Bachmann, shown here at a 2012 rally, a test of religious liberty. RNS Photo by Chris Lisee
September 23, 2014
Cathy Lynn Grossman

(RNS) These are anxious times for white evangelicals according to two new surveys.

At 20 percent of U.S. adults, they are statistically neck-and-neck with the “nones” -- people who claim no religious brand. "Nones" now tally up to 19 percent in the 2014 American Values Survey, released today (Sept. 23) by the Public Religion Research Institute. 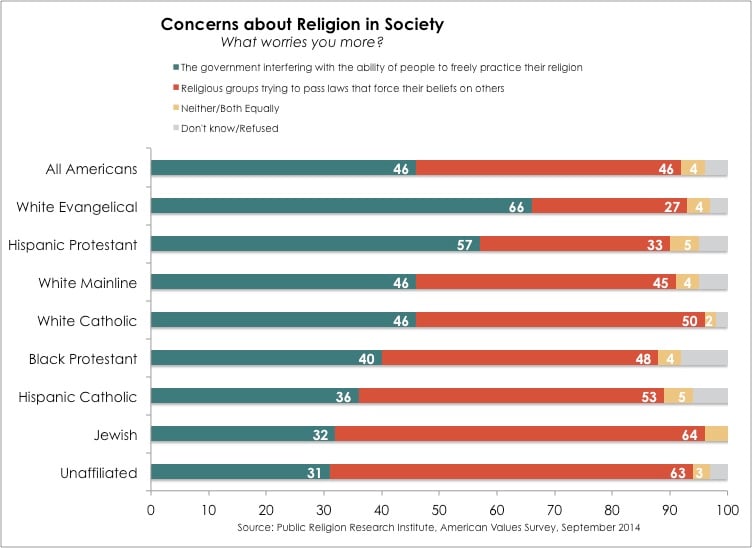 Evangelicals, said Jones, "are on the losing side of the culture wars such as gay marriage. And they see that their share (of society) is shrinking and aging, adding to their sense of being embattled,” said Robert P. Jones, CEO of PRRI.

“They can no longer say confidently they speak for all people of faith,” said Jones.

No other religious group is more worried than white evangelicals that the government will interfere with their religious liberty.

According to PRRI, 46 percent of Americans overall -- including 66 percent of white evangelicals -- say they are more concerned about “the government interfering with the ability of people to freely practice their religion.”

Meanwhile, 46 percent overall say they’re more concerned with “religious groups trying to pass laws that force their beliefs on others.” That includes 63% of “nones” and 51% of Catholics.

On a list of eight groups, gays and lesbians led with 65 percent of all surveyed saying this group was under the gun. Atheists were cited next at 59 percent. But, only 31 percent overall considered white evangelicals to be victims of "significant discrimination."

To many evangelicals, such as U.S. Rep Michele Bachmann, shown here at a 2012 rally, the legal battle over the contraception mandate in the Affordable Care Act was a test of religious liberty. RNS photo by Chris Lisee

Yet, among themselves, 50 percent of white evangelicals see themselves as victims. That’s an unrivaled 19 percentage-point gap in social perception.

“This is directly related to the current political climate, with all the voices of Republicans in the 2012 presidential campaign claiming there’s a ‘war on religion’,” said David Campbell, professor of political science at the University of Notre Dame.

"It fits a historical narrative of feeling under attack and, to a certain extent, this is part of how white evangelicals thrive,” said Campbell.

About one in three white evangelicals say it has become more difficult to be a person of their faith in the U.S. today, according to the Pew survey. And about the same number say they think of themselves as a religious minority because of their beliefs. No other group comes close to this sense of unease.

But white evangelicals are not alone in America’s gloomy mood. The PRRI American Values Survey is subtitled “Worries about Economic Inequality and Insecurity."

More Difficult to Be Religious in the U.S.? graphic courtesy of Pew Research Center.

An unarmed black teenager, Michael Brown, was killed in Ferguson, Mo., August 9, during the final week the PRRI survey was being conducted (July 21-Aug. 15). Jones said that turing the last week or research, as demonstrations in Ferguson lead nightly news nationwide, a higher percentage of African Americans and other minorities said they see unequal justice.

The PRRI telephone survey of 4,507 U.S. adults was conducted in English and Spanish. The margin of error is plus or minus 1.8 percentage points.