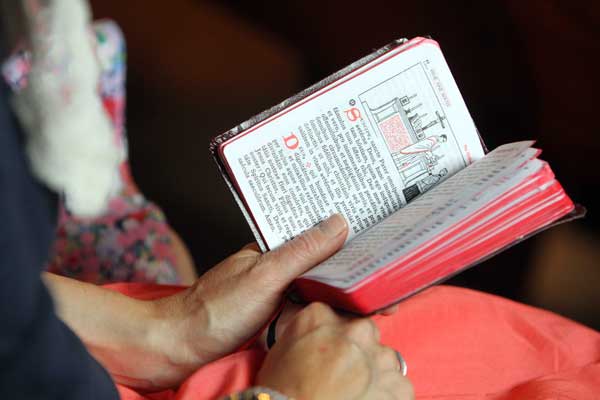 A woman uses a missal during a traditional Latin Mass at St. Michael the Archangel Chapel in Farmingville, N.Y., on June 17, 2012. The chapel is administered by the Society of St. Pius X. RNS photo by Gregory A. Shemitz
September 23, 2014
Josephine McKenna

VATICAN CITY (RNS) Picking up a piece of unfinished business that consumed the energies of Pope Emeritus Benedict XVI, the Vatican under Pope Francis is again trying to repair a decades-old breach with a controversial group of traditionalist Catholics. 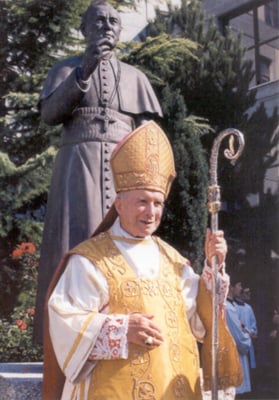 The late Archbishop Marcel Lefebvre, seen here in 1988, founded the Society of
St. Pius X, which the Catholic Church considers "schismatic." He is seen at the Econe seminary in Switzerland; the statue behind him is of St. Pius X.

Cardinal Gerhard Mueller, who heads the Vatican body responsible for doctrine, held a two-hour meeting on Tuesday (Sept. 23) with the head of the Society of St. Pius X, Bishop Bernard Fellay, and other senior officials from the breakaway group.

In a statement, the Vatican said the parties had discussed “problems of a doctrinal and canonical nature” that need to be resolved before the traditionalists can be fully reconciled with the church.

“During the meeting ... it was decided to proceed gradually and over a reasonable period of time in order to overcome difficulties and with a view to the envisioned full reconciliation,” the Vatican statement said.

The late Archbishop Marcel Lefebvre established the controversial SSPX in Switzerland in 1970. It was founded largely as a rejection of the modernizing reforms of the Second Vatican Council (1962-1965), which shelved the Latin Mass and overhauled the church's relationship with Jews and Judaism.

Relations between the two sides hit their lowest point in 1988, when the Vatican excommunicated Lefebvre and four bishops after they were consecrated without the consent of St. John Paul II.

Benedict made reconciliation with the SSPX a top priority, but was roundly criticized when one of the rehabilitated bishops, Richard Williamson, turned out to be a vocal Holocaust denier. He was later expelled from SSPX.

Three years of talks collapsed in 2012 when Fellay refused to endorse doctrinal demands sought by the Holy See; last year, SSPX appeared to harden its stance after the election of Pope Francis.

While communication remains open, there are many within the Vatican who would prefer to see a formal split between the parties but Francis appears to favor closer dialogue at least for now.