This piece was coauthored by RNS columnist Chris Stedman and Sarah Jones, Communications Associate for Americans United for Separation of Church and State. The views expressed below do not necessarily reflect those of Jones’s employer.

It’s been a rough month for feminism. From leaked celebrity nude photos to GamerGate, the treatment of women and the broader subject of feminism has divided the Internet—with some decrying feminism as a useless distraction from more important issues.

Earlier this week, actor Joseph Gordon-Levitt waded into this debate in response to people suggesting he identify as a Humanist instead of a feminist:

Lots of people saying they prefer the word Humanist over #Feminist. So I looked it up, and it turns out “Humanism” means something else…

From what I read, Humanism is a philosophy born out of the Renaissance stressing the importance of humanity over the divine or supernatural.

He isn’t the first to be told that we should replace the word feminism with Humanism; in fact, it’s a relatively common refrain. But as Gordon-Levitt learned, Humanism already means something else:

Humanism is a progressive philosophy of life that, without theism and other supernatural beliefs, affirms our ability and responsibility to lead ethical lives of personal fulfillment that aspire to the greater good of humanity.

It’s entirely understandable that some people may be unfamiliar with modern Humanism, an ethical nontheistic worldview with roots in Renaissance Humanism. Both of the authors of this piece have fundamentalist Christian backgrounds, and neither of us learned about Humanism until adulthood, after we had already left Christianity and realized we were atheists. It’s also understandable that people might not be familiar with feminism, or at least familiar with the movement’s actual aims. But as people who identify as both feminists and Humanists—and who see them as meaning different things—we think the distinction is important. 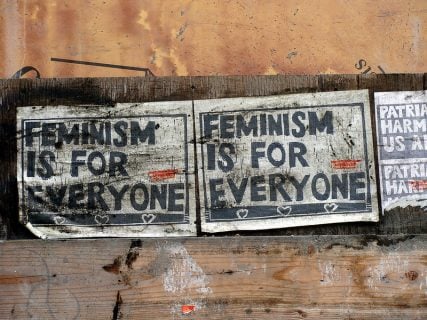 Feminism is for everyone. Photo by user knightbefore_99, via Flickr Creative Commons.

Feminism is a movement focused on the elimination of gender-based inequities—or, to quote Chimamanda Ngozi Adichie’s TEDx talk (notably sampled in Beyonce’s “***Flawless”), a feminist is a “person who believes in the social, political and economic equality of the sexes.” But as Adichie explains, feminism is not as simple as saying that things need to be equal: It’s also recognizing that right now things aren’t equal, and that the scales are tipped in favor of men.

Feminism exists because gender inequities exist. Conflating it with Humanism—either out of ignorance, or in a deliberate attempt to undermine feminism—both misunderstands Humanism as meaning “everyone-ism” rather than being a distinct nontheistic worldview, and neatly removes the gender-specific nature of these inequities from the conversation when in fact they should be the focal point.

Here’s why we need feminism, not just everyone-ism: One of the authors of this piece is much more likely to be paid significantly less for doing the same work as the other. One of us is much more likely to receive specific, gendered online harassment for writing the same words. One of us is much more likely to be the victim of violence—85 percent of domestic violence victims in the U.S. are women, and that violence is usually inflicted by men. Globally, women remain hugely underrepresented in positions of power and influence—just 7 out of 150 elected Heads of State in the world are women, and on average only 17 percent of parliamentary seats are held by women. And these statistics are an incomplete introduction to the problem: a woman’s race, gender expression, and sexual orientation can put her at even greater risk of discrimination and violence.

That’s our current reality. That’s why feminism, despite the movement’s imperfections, is still so important. It’s not just appropriate to acknowledge that these gendered inequities are less frequently experienced by men and more frequently perpetuated by them—it’s essential to recognize that the playing field isn’t level. Of course, that recognition doesn’t preclude men from becoming valuable allies in the fight against sexism. But it does require men to recognize that they are privileged by virtue of their perceived gender identity.

People are free to criticize feminism as a movement, and individuals who publicly represent it. But there is a difference between criticism and total erasure. Erasing feminism by trying to replace it with Humanism—a distinct philosophical worldview—presumes that no one benefits from it, and that presumption contradicts every bit of data we have on the status of women around the world.

Humanism calls us to focus on human concerns rather than divine ones, and gender inequity is among these concerns. As long as men continue to receive unfair advantages simply for being men, and women continue to be disadvantaged simply for being women, it’s imperative that we call feminism what it is—and acknowledge its distinct goals.

This piece was coauthored by Chris Stedman and Sarah Jones, Communications Associate for Americans United for Separation of Church and State. Prior to joining AU, she volunteered for Femin Ijtihad, where she researched Islamic law and women’s rights.