When Brianna and Chris Lindsay married in June, the evangelical couple added foot washing to the ceremony to demonstrate their mutual submission. Photo courtesy of Perfectly Paired Photography

(RNS) When Brianna and Chris Lindsay married in June, they had the church, the minister, the bridesmaids … and a foot-washing ceremony for the bride and groom.

It was, they said, a sign of their mutual submission.

“First he took off both of my shoes and we had a water basin and pitcher,” said the bride, recalling the five-minute ceremony during which a friend read a poem about the couple. “In return, I got down in my dress, took off his socks. … It probably was a little awkward for us — maybe a little — but we felt like it was an important message to show people.”

In an age of big-ticket destination weddings and reality show “bridezillas,” some evangelical Christians are opting for what writer Catherine Strode Parks calls “A Christ-Centered Wedding.”

Her new book details ways brides and grooms can fill their wedding with biblical touches to reinforce for friends and family the centrality of their faith.

“If we really believe that marriage is important, that it matters and that God infused it with so much meaning, then we want to share that joy with those who are present and invite them into that celebration and that worship,” said Parks, who co-wrote the book with her mother, Linda Strode.

At her own 2005 wedding to her husband Erik, their fathers — both evangelical pastors — co-officiated and she and her husband were encircled by their family in prayer while some friends sang the hymn “Take My Life, and Let It Be.”

Looking back, she wishes she’d done more to shift attention away from them as a couple and focused more on God — like stepping back and joining the congregation in praise and worship, as a relative did at a wedding last year.

“One of my husband’s least favorite things about our wedding was just being the center of attention,” she said. “Something like that would have reminded us both that we’re up there but this is not about us. It’s about what Christ has done.”

The notion of making the wedding a demonstration of faith is so popular in some circles that business writer Jon Acuff created a parody in July on his “Stuff Christians Like” website: “The Ultimate Christian Wedding Scorecard.” Scorekeepers get one point each for the reading of a Bible verse, two points for including 1 Corinthians 13 (“Love is patient, love is kind …”) and three points if “you hold a bachelor party but call it a ‘guys who love Jesus golfing together party.’’’

Acuff, a Christian, said he drew up the list based in part on the experience in his own wedding 13 years ago and others he’s attended since.

“We certainly had Bible passages read at our wedding but we did not do the unity candle or a lot of the other things I mentioned on my list,” which he noted, “could have been a lot longer.” Jennifer Perron with her wedding party wearing red, as a symbolism of being drenched in the rich blood of Jesus. Photo courtesy of Jessica McIntosh Photography

Here’s one that didn’t make that list: Jennifer and Sean Perron decided their 2012 wedding would represent the sacrifice of Jesus — with 10 bridesmaids wearing blood red dresses and the bride wearing white, which symbolized the “pure, spotless righteousness” of Jesus.

“We wanted to exalt the picture of marriage being a reflection of Jesus’ death, burial, resurrection, and return — the Messiah leading His people into the romance of eternal salvation,” Jennifer Perron, a Southern Baptist who lives in Louisville, Ky., explained in an email. “’Nothing But the Blood of Jesus’ was sung and is a huge reality in our life, wedding, and marriage.“

In another wedding that same year, Mia and Antonio Bailey included a liturgical dancer in their Baltimore wedding and walked down the aisle to praise and worship music as a message to their African-American friends and family about the importance of marriage. 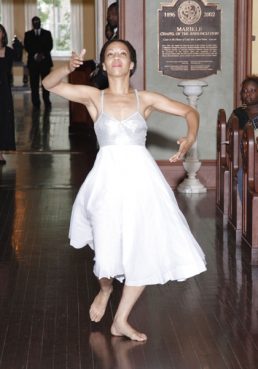 “I didn’t come down the aisle with the traditional ‘Here Comes the Bride,’” said Mia Bailey, a Baptist who opted for a rendition of “Breathe Into Me” by the band Israel and New Breed.

“Living in a ‘Love & Hip Hop’ culture where marriage doesn’t hold the same sanctity as it once did among our ancestors, we felt an obligation to make Christ the center of our ceremony.”

Larissa and Ian Murphy, who married in 2010 after he experienced a traumatic brain injury in a car accident, chose to focus on heaven in their outdoor ceremony in northeastern Pennsylvania. Their minister read from evangelical author John Piper’s book “This Momentary Marriage.” Wedding guests sang the Matt Redman worship song whose chorus quotes the psalm “Better is one day in your courts than thousands elsewhere.”

“That constant pointing to this isn’t it,” said Larissa Murphy, who recently co-authored “Eight Twenty Eight: When Love Didn’t Give Up,” about their marriage, which was the subject of a viral video. “This is just a reflection of what we’ll experience in heaven.” Although ministers have long included messages of faith within their sermons, some are encouraging couples to make sure their vows reflect a strong stance on maintaining their commitment to each other.

“I will have them actually say as part of their vows, ‘I will never divorce you,’” said J.D. Greear, a North Carolina megachurch pastor. “It’s demonstrating God’s love, and God does not divorce us when we disappoint him.”