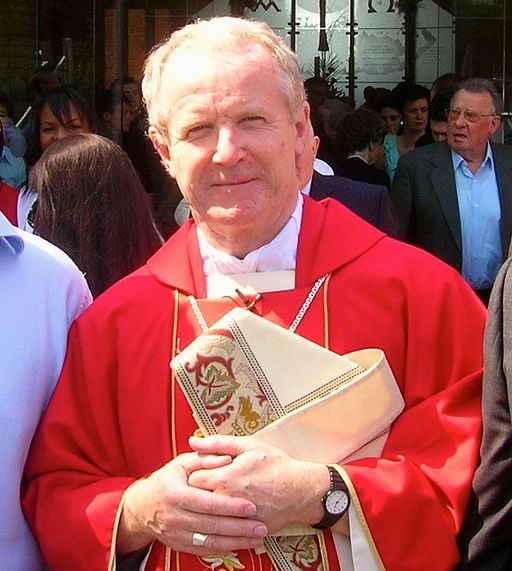 Bishop Kieran Conry during a confirmation event at St. Joseph's Catholic Church in Epsom, Surrey, in 2007.

CANTERBURY, England (RNS) A 63-year-old Roman Catholic bishop who had an affair six years ago with a woman said he feels calm, liberated and relieved after submitting his resignation to Pope Francis.

In an official statement made public Saturday (Sept. 27), Bishop Kieran Conry of Arundel and Brighton -- regions in southern England -- apologized for his actions.

"I am sorry to confess that going back some years I have been unfaithful to my promises as a Catholic priest," he said. "I would like to assure you that my actions were not illegal and did not involve minors."

Conry was consecrated bishop in 2011.

His resignation came the day before The Mail on Sunday, a British tabloid, published details of the affair.

After his resignation, the paper quoted the former bishop as saying: "In some respects I feel very calm. It is liberating. It is a relief."

But it may not be the end of the matter.

The former bishop now stands accused of a second affair, this one with a married parishioner 20 years his junior who is a mother of two children.

The Mail on Sunday featured a photo of Conry in an open-neck shirt and slacks carrying a shopping bag next to a woman with shoulder-length blond hair. Her face was blanked out by the editor for legal reasons.

The tabloid claimed that the unnamed woman’s husband is considering legal action against the Catholic Church for allegedly keeping silent about Conry. The bishop is a close friend of the head of the Catholic Church in England and Wales, Cardinal Vincent Nichols.