VATICAN CITY (RNS) Pope Francis and his bishops got a wake-up call Tuesday (Oct. 7) from a Wisconsin couple who said the Catholic Church was failing to deal with the collapse of the traditional family.

Jeff and Alice Heinzen of La Crosse told the pope and 180 bishops attending a synod devoted to family issues that they were alarmed by the number of young people born out of wedlock or living with divorced parents.

The couple are one of 14 married couples invited to give their testimony.

“We have seen the number of marriages decline each year and the rate of cohabitation increase,” said the Heinzens, who have been married 34 years. “We know countless divorced adults who have joined other faith communities because they do not feel welcomed in the Catholic Church.”

What’s more, the couple added, the church’s pastoral programs were failing to address the forces impacting marriage and family life. 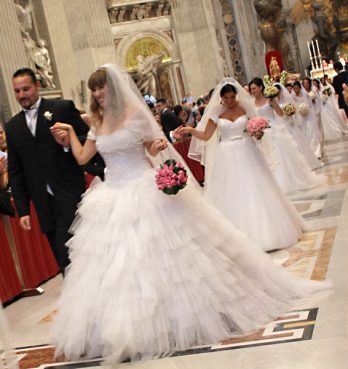 In a statement released earlier, the bishops’ synod noted that marriage is an “indissoluble sacrament” but stressed that “imperfect situations must be considered with respect.”

“For instance, de facto unions in which couples live together with fidelity and love present elements of sanctification and truth,” the bishops said.

Acknowledging the church’s declining clout, the bishops called for greater humility to deal with the “rejection of clericalism.”

“At times the church seems more concerned with power than with service, and for this reason she does not inspire the hearts of men and women,” the bishops said.

As the bishops continue to debate the definition of marriage the head of the German bishops said a majority of his colleagues supported the position of Cardinal Walter Kasper on allowing some divorced and remarried Catholics to receive Communion.

Kasper is well known as a liberal theologian and was appointed by Pope Francis as a synod speaker for the two-week event that officially opened Sunday (Oct. 5). His views have already provoked an intense reaction from conservative cardinals.

Under current church law, divorced Catholics who remarry without first obtaining a church annulment — a complicated and sometimes expensive venture — are barred from Communion because they are considered to be living in sin. Critics say the practice alienates otherwise faithful Catholics and perpetuates the stigma around divorce.

(David Gibson contributed to this story.)