(RNS) A  new report shows that Catholic sisters in the U.S. face a more serious challenge to their existence than the Vatican-led investigation of the American nuns: A rapidly aging membership and a decline in vocations that afflicts even the most traditional orders. 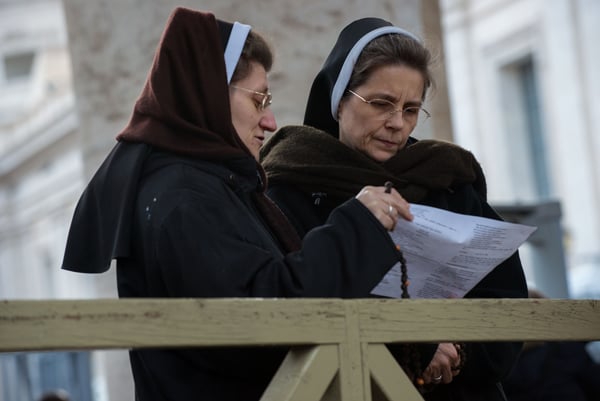 Nuns in St Peter’s Square wait to find out whether the College of Cardinals have elected a new pope on March 12, 2013 in Vatican City, Vatican. RNS photo by Andrea Sabbadini

“The overall change in the population of women religious in the United States over the past 50 years is one of dramatic decline,” wrote the authors of the report, published Monday (Oct. 13) by the Center for Applied Research in the Apostolate at Georgetown University.

The CARA researchers track the widely noted rise and fall in the number of nuns, noting that membership in women’s religious orders grew rapidly in the first half of the 20th century, reaching a high point of 181,421 sisters in 1966. Since then, the numbers have steadily declined, to below 50,000 today, a 72.5 percent drop-off.

“There are about as many women religious in the United States now as there were a hundred years ago,” they wrote.

They also rebutted the common claim that more traditional communities — for example, those whose members wear the full habit — are growing “while those institutes that do not wear a traditional habit are declining.”

In fact, the researchers said, the more liberal, socially active communities of sisters are drawing about the same number of new entrants as the more conservative, tradition-minded communities. 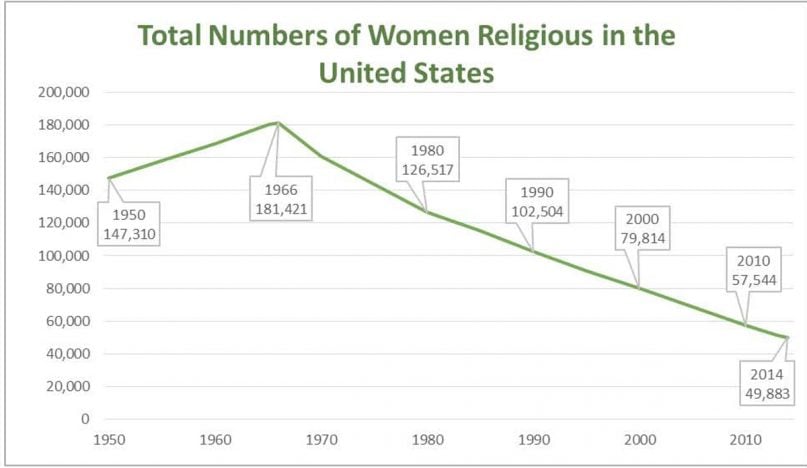 “Total Numbers of Women Religious in the United States,” graphic courtesy of CARA

The report compared data from communities of nuns who belong to the more progressive Leadership Conference of Women Religious, or LCWR, which represents 80 percent of all Catholic sisters in the U.S., and communities that belong to the Conference of Major Superiors of Women Religious, or CMSWR, that was established by Rome in 1992 as a traditional counterpoint to the LCWR.

The LCWR, which was set up in the 1950s, has been under investigation by the Vatican’s Congregation for the Doctrine of the Faith, which said it skews too liberal in its views and mission. Cardinal Gerhard Mueller, who heads that office, has claimed that the vocations decline among LCWR communities is a reason Rome had to intervene.

“Age Distribution of Sisters in the U.S.,” graphic courtesy of CARA

“One of the most striking findings regarding new entrants is that almost equal numbers of women have been attracted to institutes in both conferences in recent years,” the CARA researchers wrote. They also said some of the communities that were founded in recent decades flourished initially and then tailed off.

The CARA analysis identified six communities that have continued to do well, doubling their membership between 1970 and 2013. 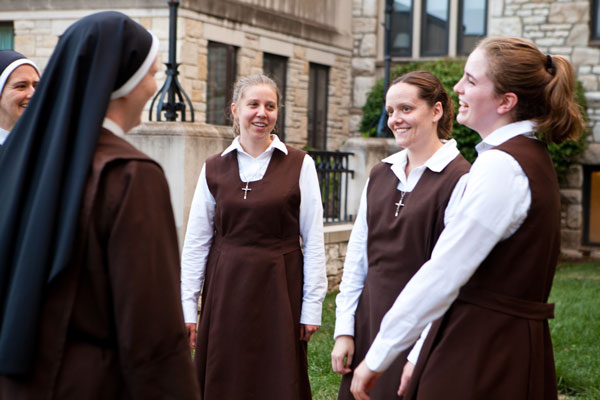 Postulants (from left center to right) Marissa Mantey, Suzie Lott and Christina Heisler talk on the grounds of the Carmelite Sisters of the Divine Heart of Jesus convent located in a suburb west of St. Louis. RNS photo by Ryan Gladstone

But the researchers also noted that the six communities that have doubled their ranks are small, and their net membership increase amounts to 267 members since 1970.

“Whatever these institutes have done or are doing is unlikely to offset losses in the tens of thousands elsewhere. It is simply not enough,” they wrote.

Moreover, the researchers found that those entering religious life today tend to be older than in past years, and nuns in all communities are grayer than ever: Today, they wrote, there are more Catholic sisters in the United States over age 90 than under age 60.