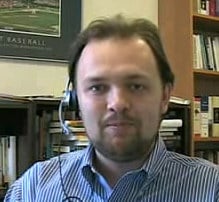 In a series of tweets, New York Times conservative pundit Ross Douthat has taken exception to my Monday post on the battle between rigorists and accommodationists at the Synod on the family now winding up its business in Rome. As you can see, it’s not that he disputes my characterization of the opposing forces but rather the association of today’s rigorists with the Puritans of the early church — Novatians and Donatists who refused to allow lapsed Christians back into the fold:

This piece, like much commentary on Catholic matters now, seems to confuse 2 very different kinds of “rigorism”: http://t.co/Yy2fQyuqlN

Excluding the repentant, Donatist-style, has long been rejected by the church. But what’s at stake now is something very different …

… namely, what counts as repentance, when is repentance necessary, what kind of repentance do some sins require, etc.

These are issues that can’t be adjudicated with references to Donatists and Novatians, or settled by idea of Church as hospital for sinners.

And the suggestion that they can is part of why conservatives fear, fairly or not, that the anti-rigorist faction is proceeding deceptively.

I’m not sure that I, as an outside observer, should be considered part of the anti-rigorist faction. But deceptive? As I noted, the Novatians were rigorists in both of Douthat’s senses: Not only did they refuse to take back the penitent who had given up the faith under persecution but they also were doctrinally opposed to second marriages.

More importantly, it is precisely a penitential solution that today’s rigorists reject when it comes to the issue of whether to permit divorced and remarried Catholics to take Communion. Discussion of this issue, which has been a principal bone of synodal contention, has centered on Cardinal Walter Kaspar’s proposal that they be permitted to do so by means of the Eastern Orthodox principle of oikonomia, under which second and third marriages are recognized as valid but undertaken penitentially.

This remains a live option at the Synod, as its controversial midterm report made clear: “For some, access to the sacraments might take place if preceded by a penitential practice — determined by the diocesan bishop — and  a clear commitment in favour of the children.”

Douthat’s own solution for the divorced-and-remarried — speeding up the annulment process where needed and (possibly) rejecting civil marriage in some places as ecclesiastically invalid — makes no allowance for the penitential approach. In that sense he, along with the rest of today’s rigorist faction, is a rigorist in the Novatian-Donatist sense that he condemns.