(RNS) The owners of an Idaho wedding chapel have filed suit against officials in Coeur d’Alene, claiming that the city is unconstitutionally forcing them to violate their religious beliefs by performing same-sex marriages or face possible fines and jail time.

The state’s 2004 ban on same-sex marriage was ruled unconstitutional by a federal judge earlier this year; the Supreme Court refused to consider Idaho’s appeal on Oct. 10, making the conservative state one of more than 30 states, along with the District of Columbia, to marry gay and lesbian couples. 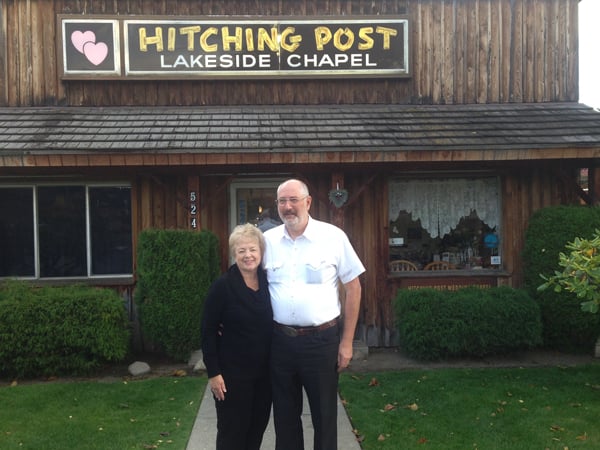 Donald and Evelyn Knapp are ordained ministers who run The Hitching Post, a chapel in Coeur d’Alene, where they conduct weddings. They say in a lawsuit that they can’t provide same-sex weddings because it’s “something forbidden by their religious beliefs and ordination vows.”

A 2013 Coeur d’Alen ordinance bans discrimination, including based on sexual orientation, in places of public accommodation. Violation of the ordinance is a misdemeanor punishable by fines and jail time.

Religious entities are exempt from the city ordinance, as they often are from discrimination ordinances. But earlier this year, city attorney Warren Wilson said that the for-profit wedding chapel would likely be required to follow the ordinance.

“If you turn away a gay couple, refuse to provide services for them, then in theory you violated our code and you’re looking at a potential misdemeanor citation,” Wilson told a local television station, KXLY.

Similar laws have been applied to florists, bakeries and photographers that have refused to work on same-sex weddings in other states, Wilson told the local newspaper, The Spokesman Review: “I think that term is broad enough that it would capture (wedding) activity.”

A man recently called the chapel to ask about a same-sex wedding ceremony and was declined, the lawsuit says. The chapel owners are ordained by the International Church of the Foursquare Gospel, a Pentecostal denomination.

On Friday (Oct. 17), an Arizona-based religious liberty group, Alliance Defending Freedom, filed a lawsuit requesting a temporary restraining order, arguing that applying the ordinance to the Knapps’ situation would be unconstitutional and would violate Idaho’s Religious Freedom Restoration Act.

Eugene Volokh, who blogs for The Washington Post, believes the ministers will ultimately be entitled to an exemption under Idaho’s RFRA.

“Perhaps some might feel offended by such a statement of religious rejection, but I don’t think there can be a compelling government interest in shielding people from such rejections when it comes to the performance of ceremonies,” Volokh wrote. “Note that, if the law can be applied against the Knapps, public accommodation laws could also equally be applied to ministers who provide freelance officiating services in exchange for money.”

After the Supreme Court struck down the central provisions of the Defense of Marriage Act last year, President Obama called for the equal treatment of Americans under the law, as well as a commitment to religious freedom.

“How religious institutions define and consecrate marriage has always been up to those institutions,” Obama said. “Nothing about this decision — which applies only to civil marriages — changes that.”