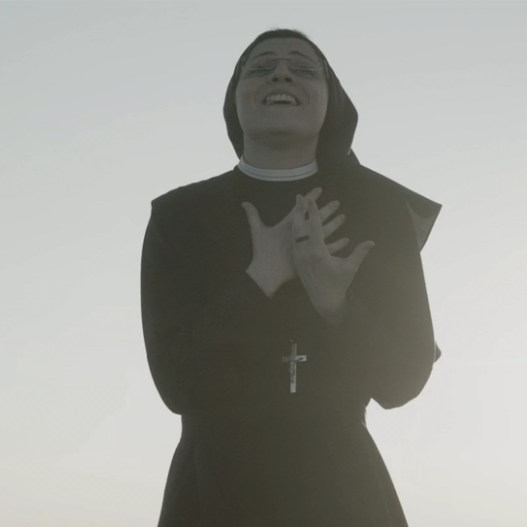 ROME (RNS) Italy’s singing nun Sister Cristina Scuccia, who became a global sensation after winning a TV reality show, has chosen Madonna’s controversial classic "Like a Virgin" as the first single from her debut album.

Sister Cristina, 26, says her version of the salacious pop song is a “testimony of God’s capacity to turn all things into something new” as well as her personal calling to be a nun.

A black and white video of the nun’s cover has been released on the musical site Vevo. Dressed in full black habit and veil, wearing sensible black shoes and a cross around her neck, she sings against stunning backdrops in Venice. There are none of the raunchy moves Madonna included in the original version, filmed on the city’s gondolas in 1984.

“I chose it, without any intention to be provocative or scandalous,” Sister Cristina told the Italian bishops’ daily Avvenire this week. “I wanted to transmit calmness and poetry. I really think we succeeded.”

When Madonna’s version was first released 30 years ago, conservatives called for the song to be banned because they believed it -- and the original video clip -- promoted sexual promiscuity and undermined family values.

Sister Cristina said, as far as she knew, Madonna had not yet heard her version. “But I would love to see her face when she does and when they tell her that it is a nun singing it,” she said.

The Sicilian nun has attracted 100 million hits on YouTube since she appeared on the Italian version of "The Voice" singing themes such as Alicia Keys' "No One," which is also included on the new album.

Fans are already welcoming Sister Cristina's debut recordings. “If the nuns at my high school were like her, I’d be evangelizing the masses now,” one tweeted.

“She’s back with a vengeance,” said another.

The nun’s album, to be released on Nov. 11, has been produced by Elvezio Fortunato and recorded in several studios in Los Angeles.

She said she felt "small" when she considered how famous she had become and felt a duty to be a "witness" to Jesus Christ and her faith.