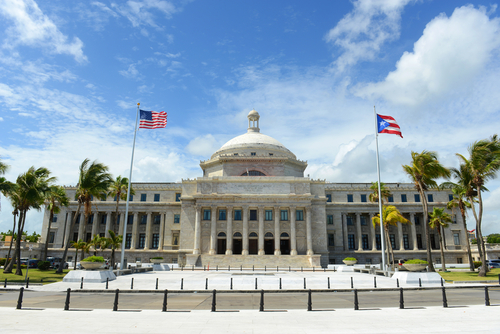 (RNS) Gay marriage may be sweeping the nation, but in Puerto Rico it remains against the law.

A federal district judge late Tuesday (Oct. 22) rejected the reasoning used in at least 14 other decisions and said his hands were tied by a 1972 Supreme Court ruling that upheld a Minnesota same-sex marriage ban "for want of a substantial federal question."

The ruling marks only the second time that a federal judge has upheld a same-sex marriage ban since the Supreme Court ruled last year that the federal government must recognize gay marriages and refused to save California's ban from being toppled.

A federal judge in Louisiana also upheld his state's ban, while federal and state courts from Florida to Alaska have said gays and lesbians have a right to marry.

Nevertheless, Perez-Gimenez's ruling puts the 1st U.S. Circuit Court of Appeals in play – an unusual development, since all four states in that Northeast circuit already has legalized gay marriage, dating back to Massachusetts in 2003.

The plaintiffs in the Puerto Rico case have said they will appeal the case to the 1st Circuit in Boston, which has jurisdiction over Puerto Rico, Maine, New Hampshire, Massachusetts and Rhode Island.

Perez-Gimenez said in his ruling that none of the Supreme Court's decisions since 1972 -- including those striking down bans on interracial marriage and sodomy, as well as last year's rulings -- rendered the court's 1972 decision in Baker v. Nelson obsolete.

"Baker, which necessarily decided that a state law defining marriage as a union between a man and woman does not violate the 14th Amendment, remains good law," he said. "Because no right to same-gender marriage emanates from the Constitution, the Commonwealth of Puerto Rico should not be compelled to recognize such unions. Instead, Puerto Rico, acting through its legislature, remains free to shape its own marriage policy."

While constraining his ruling along such technical lines, however, the judge made clear his own views.

The ruling drew praise from conservative groups opposed to same-sex marriage, who have had little to cheer about in recent months.

"Judge Perez-Gimenez serves as a model of judicial restraint in the face of an epidemic of federal judges legislating from the bench on the issue of marriage," Family Research Council President Tony Perkins said. "It is time for other courts to follow his example, and the Supreme Court shouldn't allow activist lower courts to redefine states' marriage laws."

Meanwhile, the Supreme Court's decision earlier this month not to hear appeals from five states where gay marriage bans had been struck down has had a domino effect on other states. Thirty-two states and the District of Columbia have now legalized same-sex marriage, with Kansas, Montana and South Carolina likely to be next. And the Cincinnati-based 6th U.S. Circuit Court of Appeals could rule any day in a series of cases from Ohio, Michigan, Kentucky and Tennessee.