(RNS) Earlier this month we learned that Washington, D.C., police had charged a prominent rabbi with spying on naked women at his synagogue’s mikvah. So what is a mikvah, anyway, and does it have anything to do with sex?

A mikvah is a pool of water — some of it from a natural source — in which observant married Jewish women are required to dip once a month, seven days after the end of their menstrual cycle. The ocean is a mikvah. A lake can be a mikvah. More commonly, it’s indoors and looks like an oversized bathtub. “Mikvah” comes from the Hebrew word for “collection,” as in a collection of water.

For those curious about the law behind the mikvah, Rabbi Alana Suskin points to lusty Leviticus verses (15:19, 15:24, 18:19 and 20:18) that deal with all sorts of, er, human emissions. In ancient times, the Israelites immersed in a mikvah before entering Jerusalem’s Holy Temple. 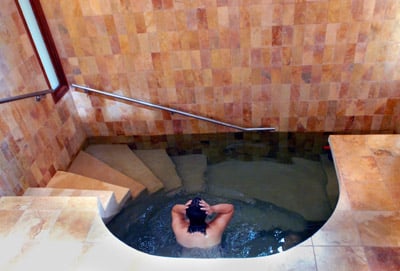 Judy Bolton-Fasman immerses herself in the mikvah, or ritual bath, at Mayyim Hayyim (Living Waters) in Newton, Mass. Increasing numbers of Jews are using the mikvah to mark the start of the Jewish New Year and symbolically wash away the burdens of the past. Religion News Service photo by Faith Ninivaggi

So, a mikvah is about hygiene?

Dips in the mikvah take the woman from a state of impurity (“tumah” in Hebrew) to a state of purity (“taharah”). Tumah and taharah, however, do not correlate with clean and dirty, said Rivkah Slonim, director of education at the Chabad Center for Jewish Student Life at Binghamton University. “Mikvah is about the immersion of the soul,” she said.

Tumah refers to the fact that the woman had a period because she didn’t become pregnant in the past month; it recognizes the absence of a new life in her. The mikvah restores her to a state of taharah in that she has the potential to bring new life into the world.

What about the sex part?

Once the mikvah immersion takes place, a woman is free to have sex with her husband, which is not permitted when she is in a state of tumah. At this point in a woman’s cycle, she is most fertile.

Yes, your math is right. Very observant Jewish couples do not have sex for half the month — the days a woman is having her period and seven days after that.

It’s a big no-no to talk about another woman you saw at mikvah, because it’s the same as saying: “I know who’s gonna get some tonight!”

The following video, from “Jew in the City,” features a mikvah in New Jersey, a particularly nice one.

Can you wear a bathing suit in the mikvah?

No. The idea of mikvah is that there is no barrier between the person and the water. This means no clothes, but also no jewelry, makeup, nail polish, fake nails or beauty products on the hair or skin. In mikvahs run by more observant Jews, an attendant will check to make sure these requirements are met.

Aren’t people too embarrassed to get naked at the mikvah?

Less traditional mikvahs allow people to immerse alone. In traditional mikvahs, a female attendant will give the woman as much privacy as possible, averting her eyes until the woman is in the water. Then she watches to see that an immersion is “kosher,” i.e., that the woman’s body is completely under water. Her hair can’t be floating on the surface. A mikvah near the synagogue of Boskovice in Czech Republic.

Do men ever go to the mikvah? What about unmarried women?

Observant men will sometimes use a mikvah before Shabbat (the Jewish Sabbath) and before Jewish holidays. Mikvahs are also used to make eating and cooking implements kosher, or permitted, under Jewish dietary laws. Conversions to Judaism also require a dip in the mikvah, too.

In recent decades, the mikvah has enjoyed a revival among less observant Jews who see it as a way to mark transitions in their lives. “Open” mikvahs, those that welcome Jews for reasons not required by Jewish law, encourage people to immerse after a divorce, after chemotherapy, to celebrate a new job or to find closure after an abortion — among other reasons. Mayyim Hayyim (“Living Waters”) near Boston is considered a pioneer in the movement.

Do non-Jews ever go to mikvah?

Not typically, though many Christians have pointed out the Jewish roots of Christian baptism.

One of the disturbing aspects of the case of Rabbi Barry Freundel, the District rabbi who has pleaded not guilty to spying on women as they prepared for mikvah, is that he reportedly encouraged his non-Jewish students to give mikvah a try.

Many traditional Jews believe mikvahs should be reserved for those who need it to observe Jewish law. And they worry that Freundel may have had a sinister motive: to peep at naked women. 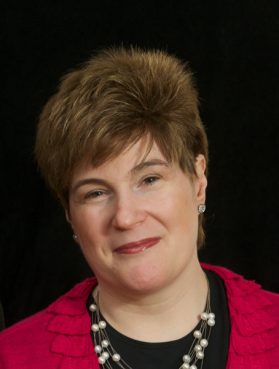 Rivkah Slonim, of Binghamton, is the mother of nine children. Photo by Shana Sureck

Can the mikvah enhance your marriage? Your sex life?

There’s no proof, but many Jewish couples say observing the laws that require them to not touch each other until the woman has emerged from the mikvah gives them a once-a-month honeymoon. It takes hard work on many fronts to make a marriage work, but the mikvah can help, writes Slonim:

For two weeks they must finely hone that almost lost form of art: communication. With physical intimacy not an option, they are catapulted into a deep friendship, which in turn can only help fuel the passion they unleash when they come back to each other’s sexual embrace.