Who were the “perps”?

One was Arnold Abbott. He runs a group called Love Thy Neighbor Inc. and has been feeding the homeless in Fort Lauderdale for more than 20 years. A retired jewelry salesman from Philadelphia, he is a World War II veteran who won two Purple Hearts as an infantryman.

“One of the police officers said, ‘Drop that plate right now,’ as if I were carrying a weapon,” Abbott said.

Maybe because he has “priors.” In 1999, he was feeding the homeless on Fort Lauderdale Beach, and the city tried to stop him. He sued and won. And he is going to fight again.

What could they get for feeding the homeless out on the street? Sixty days in jail and a $500 fine.

There are now 13 cities in this country with similar restrictions. They include: Atlanta; Phoenix; San Diego; Los Angeles; Oklahoma City; Raleigh, N.C.; Myrtle Beach, S.C.; and Birmingham, Ala.

Perhaps the good citizens of Fort Lauderdale should purchase fire insurance, and earthquake insurance — the most disaster insurance they could buy.

Because if God still works the way God worked back in biblical times — Fort Lauderdale could be toast.

It’s the story of Sodom and Gomorrah. God planned to destroy those cities because of their wickedness. Abraham pleads with God for the life of those cities, and ultimately, Abraham loses. Cue the fire and brimstone. 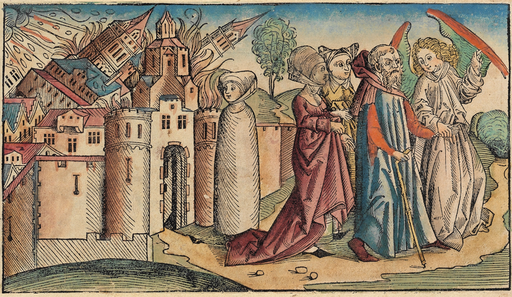 Lot leaving Sodom, a woodcut from the Nuremberg Chronicle.

But what, precisely, were the sins of Sodom and Gomorrah?

Sodomy, right? That is what we have always believed. Two angels, disguised as men, came to Abraham’s nephew, Lot, in Sodom, and he offered them hospitality. The men of Sodom crowded around his house, demanding that Lot bring the visitors out to them — “that we may know them.”

If you assume that “know” means to “know” in a biblical sense, then the men of Sodom wanted homosexual intercourse with the visitors — hence, sodomy.

But was that really the sin of Sodom and Gomorrah?

The prophet Ezekiel thought otherwise: “Behold, this was the guilt of your sister Sodom: she and her daughters had arrogance, abundant food, and careless ease, but she did not help the poor and needy” (Ezekiel 16:49).

The ancient Jewish sages said the people of Sodom passed laws that prohibited giving to charity.

I remember a kid asking me: “Rabbi, there were two cities that God destroyed, right? Sodom and Gomorrah? I know what sodomy is — but what’s gomorry?”

The sin of “gomorry” is the sin of smugness, and the sin of callousness to the poor. A society that betrays such values ultimately self-immolates.

Go back to 18th-century Vilna, or Vilnius — the so-called “Jerusalem of Lithuania.” The greatest Jew of Vilna was the famed Vilna Gaon, one of the most brilliant Jews who ever lived.

One day, a member of the council proposed that it either end or greatly reduce the influx of Jews into Vilna.

At that moment, the Vilna Gaon rose to leave the meeting.

“But, rabbi,” said a council member, “we need your comment on this proposed new legislation.”

“You only need me if we are going to be discussing new legislation,” the Gaon replied. “This isn’t new. They tried it in Sodom years ago.”

Jeffrey Salkin is the rabbi of Temple Beth Am in Bayonne, N.J. He is the author of numerous books on Jewish spirituality. Photo courtesy of Jeffrey Salkin

And the proposal was dropped.

If only the Vilna Gaon had been in Fort Lauderdale, and in Atlanta, and Phoenix, and San Diego, and Los Angeles, and Oklahoma City, and Raleigh, and Myrtle Beach, and Birmingham.

(Jeffrey Salkin is the rabbi of Temple Beth Am in Bayonne, N.J. He is the author of numerous books on Jewish spirituality.)

News
In Greece, pandemic deprives refugees of vital link to food and locals
Articles of Faith
Muslim generosity in Ramadan is more than a feel-good story
Coronavirus
Under St. Peter’s dome, Catholic charities help homeless stay safe from coronavirus
News
New York’s Bowery Mission adapts homeless ministry to coronavirus restrictions
News
‘Yes in God’s Backyard’ to use church land for affordable housing
© Copyright 2020, Religion News Service. All rights reserved. Use of and/or registration on any portion of this site constitutes acceptance of our User Agreement and Privacy Policy, Privacy Statement and Cookie Notice. The material on this site may not be reproduced, distributed, transmitted, cached or otherwise used, except with the prior written permission of Religion News Service.