VATICAN CITY (RNS) Pope Francis on Tuesday (Nov. 11) created a new Vatican body to deal with the most serious cases of child sexual abuse and to streamline complaints against the clergy.

The Vatican said the pope would nominate seven cardinals or bishops to consider appeals from clergy accused of abusing minors in a bid to speed up the judicial process of clergy who have received an initial assessment by local bishops. 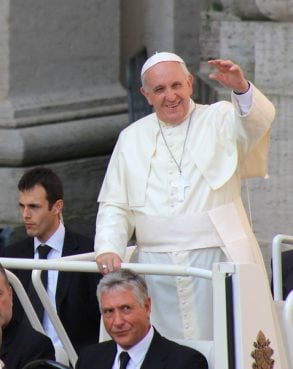 Pope Francis on Tuesday (Nov. 11) created a new Vatican body to deal with the most serious cases of child sexual abuse and to streamline complaints against the clergy. Religion News Service photo by Cathleen Falsani

The members of the panel, or “college,” may come from the Congregation for the Doctrine of the Faith, which currently handles cases, or elsewhere in the church. Members will also be asked to deal with serious abuses of penance in the confessional.

The Vatican’s chief spokesman, the Rev. Federico Lombardi, called the pope’s proposal a “good solution” to help alleviate a backlog of cases.

Bishops accused of sexually abusing minors will still have their appeals handled by a session of CDF members at their monthly meetings.

“This is a good sign Francis is giving: He is basically saying that the CDF remains competent, and gives them an extra instrument to promptly deal with a specific type of appeals against decisions, namely recourses against administrative decrees,” said Kurt Martens, a canon law expert at Catholic University in Washington.

The immediate changes were outlined in a papal rescript, or “Rescriptum,” signed by the Vatican secretary of state, Cardinal Pietro Parolin, and printed in L’Osservatore Romano, the Vatican’s official newspaper.

The pope has adopted a hard line on clerical sex abuse and at times asked for forgiveness while lambasting church leaders more than once for protecting abusers.

Last December, Francis created a special commission of lay and ordained Catholics led by Boston Cardinal Sean O’Malley to look at child protection policies and pastoral care for victims. More recently, he ordered the arrest of a former papal ambassador, Polish Archbishop Jozef Wesolowski, on charges of abusing children in the Dominican Republic. Wesolowski is facing trial at the Vatican.

But the Survivors Network of those Abused by Priests, which has more than 18,000 members around the world, said Tuesday the Vatican was not doing enough to ensure that those accused of sex crimes faced justice.

“New procedures aren’t needed,” said Mary Caplan from SNAP, in a statement. “Decisive action is needed. And historically, only bishops who commit child sex crimes face even the slightest discipline while the hundreds more who conceal the crimes are ignored or promoted.”

“Defrocking dangerous molesters is a first step, not the last, that any bishop should take.”

Early this year, the Vatican’s ambassador to United Nations agencies in Geneva, Archbishop Silvano Tomasi, told a U.N. panel the Catholic Church had “crossed the threshold” in dealing with abuse.

He said that 848 clerics had been expelled from the church between 2004 and 2013 and that the church had paid $2.5 billion in compensation to victims of clerical abuse in the U.S. alone.