What do you say when an unarmed teenager is dead and his killer walks free — as if he had never pulled the trigger even once, let alone over and over and over again?

If you haven’t heard by now, Ferguson Officer Darren Wilson was not indicted for the fatal shooting of Michael Brown.

If you haven’t heard by now, black Americans have to go to sleep another night in fear for their lives, reassured that walking in the street may be reason enough to be gunned down by the people who are meant to protect them.

If you haven’t heard, there are legions of Christians asking us to hear both sides, to reserve judgment, to have faith in the system. 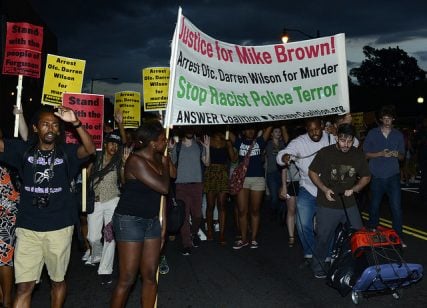 Aren’t we the people who ought to know, more than anyone, that the system is always broken? As long as systems are made up of people, they are fallible. As long as insidious racism rules in this nation, black people are the most vulnerable. As long as white people benefit from racism, we are silent, which is the same as complicit. Conservative Christians are quick to decry the looting tonight, but they are missing the forest for the trees. Langston Hughes put it thusly in his poem, “Justice”:

That Justice is a blind goddess

Is a thing to which we black are wise.

That once perhaps were eyes.

Think, for a moment, about Michael Brown’s parents. Their son, an unarmed teenager, was shot and killed by a police officer. Wilson claims that Brown charged at him, although that account makes very little sense. Why would an unarmed and wounded teen charge a police officer? But Christians, like any other kind of person, are too often quick to take the side of the person who they would play in a given situation. Would a good Christian have smoked marijuana, or stolen cigarillos? No way. So the Christian puts himself in the position of Darren Wilson and feels empathy for him, not for Michael Brown or Brown’s family.

Why is it so hard for us to see ourselves in people who don’t look like us or live like us?

Nothing has changed. We are all of us Cain, absolving ourselves of responsibility for our brother. A wrong has been done, and injustice is synonymous with evil, and evil is not a force that dwells outside every human heart. I have it, you have it, and until we recognize our own capacity for injustice we will never seek true reconciliation. We will seek pat answers and comfort in our rightness, as evinced in Ferguson Prosector Robert McCulloch’s self-justifying speech tonight. Sharpshooter with gun trained at camera at protests in Ferguson, MO; August 2014 | Photo by Jamelle Bouie via Wikimedia Commons (http://commons.wikimedia.org/wiki/File%3ASharpshooter_facing_camera.jpg)

McCulloch spoke at length about the role of the “24-hour news cycle” in perpetuating a narrative. He did not specific what narrative, but it’s easy to guess it was about Michael Brown and Darren Wilson. He never mentioned the excessive force trained against Ferguson protestors, the overwhelming majority of whom have been nonviolent non-looters. McCulloch cited contradictory eyewitness accounts of the shooting as one reason Wilson did not go to trial, which makes no sense; contradictory eyewitness statements ought to be even more reason to bring a case to trial. Wilson ought to see the inside of a courtroom because courtrooms are where justice happens in America. Instead, he is recently married and will go free and many Christians will applaud the decision. That is a moral failure.

Christians need to be willing to see the ugliness at work in the human heart that leeches into human systems. A huge part of the problem I have with Christian media and music is the determination with which they relentlessly portray the “positive” aspects of life, as if God promised a life free from violence and hurt and pain. What kind of lies are we being sold? What kind of lies are we buying?

God, be with the family of Michael Brown tonight. God, be near the hearts and spirits of every person whose heart breaks tonight. God, bring justice to the systems that are broken shells, and where we need to see the cracks, let us not turn away.

Today, I will be reading and praying this last passage from Ezekiel 34. Join me?

“’I will make a covenant of peace with them and rid the land of savage beasts so that they may live in the wilderness and sleep in the forests in safety. I will make them and the places surrounding my hill a blessing. I will send down showers in season; there will be showers of blessing. The trees will yield their fruit and the ground will yield its crops; the people will be secure in their land. They will know that I am the Lord, when I break the bars of their yoke and rescue them from the hands of those who enslaved them. They will no longer be plundered by the nations, nor will wild animals devour them. They will live in safety, and no one will make them afraid. I will provide for them a land renowned for its crops, and they will no longer be victims of famine in the land or bear the scorn of the nations. Then they will know that I, the Lord their God, am with them and that they, the Israelites, are my people, declares the Sovereign Lord. You are my sheep, the sheep of my pasture, and I am your God, declares the Sovereign Lord.’”