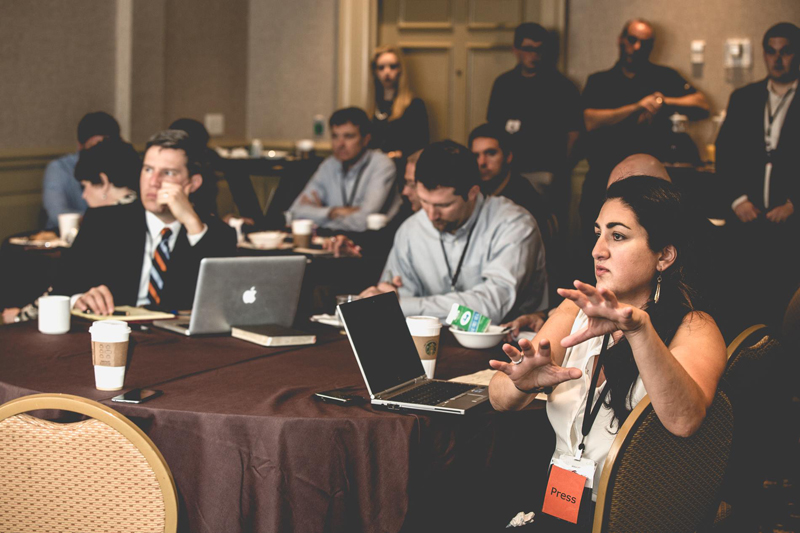 Over 1,000 Southern Baptists gathered in Nashville recently for a Ethics and Religious Liberty Commission conference on homosexuality. Pictured here, a member of the press speaks during an ERLC conference breakfast. Photo by Rocket Republic, courtesy of ERLC National Conference
November 25, 2014
Sarah Pulliam Bailey

WASHINGTON (RNS) Standing on the sidewalk outside an imposing downtown church, Michael Corral carried a portable loudspeaker and a handmade wooden cross with an old-fashioned message: "REPENT & BELIEVE."

"They're twisting Scripture to see through their sins," he said, as a group of pro-LGBT evangelicals met inside.

Meanwhile, halfway across the country, conservative activist Eric Teetsel was monitoring the same conference from his home in Kansas, firing off 140-character tweets using the conference hashtag, #TRPinDC.

"I have more respect for those who acknowledge what the Bible says and reject it than those who twist it to serve their goals," tweeted Teetsel, the executive director of the  Manhattan Declaration project, which works to preserve traditional marriage.

I have more respect for those who acknowledge what the Bible says and reject it than those who twist it to serve their goals. #TRPinDC

It was essentially the same message, but two different mediums and two different audiences. In 2014, activists like Teetsel can reach a far broader audience -- 3,600 followers in his case, not counting retweets -- than streetside evangelists like Corral.

Some leaders use trending topics or hashtags to build momentum around a certain conversation. The idea is that by pointing followers to a catchy hashtag, activists can spark conversation and rally supporters around a cause. On Monday (Nov. 24), for example, Twitter lit up with the hashtag #PrayForFerguson after a grand jury decided not to indict a white police officer who fatally shot a black teenager.

One of the earlier noteworthy mobilizing campaigns included #KONY2012, a movement founded by a Christian, who launched a campaign to try to capture African Lord's Resistance Army leader Joseph Kony. First Lady Michelle Obama famously participated in the #BringBackOurGirls campaign after more than 200 Nigerian schoolgirls were kidnapped by the terrorist group Boko Haram.

But everyone on Twitter is learning that a hashtag cuts both ways -- it can be hijacked or lampooned by detractors, and it's a key way that online activists are pushing back against opposing messages or what some might even call hate speech.

Last week, embattled comedian Bill Cosby posted a photo of himself and wrote: "Go ahead. Meme me! #cosbymeme." The idea immediately backfired, as people began making rape allegations against him. The New York Police Department, too, asked followers to send photos of themselves posing with officers and using the hashtag #myNYPD. The effort morphed into a slew of negative tweets about aggressive policing.

The Duggar family of TLC's "19 Kids And Counting" recently posted about daughter Jessa Duggar's marriage to Ben Seewald and the criticism they received for posting a photo of the chaste young couple kissing.

"We challenge all married couples to take a happily married picture and post it here," they posted. Several same-sex couples gladly took up the challenge, knowing full well that the Duggars have spoken out against homosexuality.

More than 1,000 Southern Baptists gathered in Nashville recently for an Ethics & Religious Liberty Commission conference on homosexuality. Pictured here, a member of the press speaks during an ERLC conference breakfast. Photo by Rocket Republic, courtesy of ERLC National Conference

Aaron Meares, an evangelical pastor in western Michigan, wasn't able to access the conference's live-stream feed, so he followed the #ERLC2014 instead. At a conference that was notable for its kinder, gentler tone toward gays, "seems there's a vast diff. in tone b/w the presenters and the critics," he tweeted.

Am unable to lifestream #ERLC2014 . Following the hashtag instead. Seems there's a vast diff. in tone b/w the presenters and the critics.

Evangelical author Barnabas Piper saw the hits from the other side coming in live time as Southern Baptist leader Al Mohler gave the opening address. "It's daylight, trolls," he tweeted, using the online term for take-no-prisoners critics. "You have to wait until sundown to tweet about #ERLC2014."

It's daylight, trolls. You have to wait until sundown to tweet about #ERLC2014.

Evangelical author Rachel Held Evans did not attend the conference but followed the live stream, offering steady pushback to the conference speakers to her more than 56,000 followers. "You can't promote a livestream and hashtag and then get annoyed when people use it," she tweeted.

You can't promote a livestream and hashtag and then get annoyed when people use it. #ERLC2014.

One of the conference sponsors said his company considered promoting materials through the official conference hashtag but decided against it because he didn’t want his product associated with a feed that was already ripe with conflict.

Most organizers know online dissent is part of the game.

“It doesn’t bother me,” said ERLC head Russell Moore. “I think that just goes with the territory of social media right now. I think most people know that and understand that.”

Most LGBT-focused gatherings don't receive the same level of online vitriol, said Zach Ford, the editor of ThinkProgress LGBT, a blog hosted by the progressive Center for American Progress. He attended and wrote about the Nashville conference, and many attendees, he said, were surprised that messages of “love your LGBT neighbor” weren't better received.

“I think a lot felt taken aback,” Ford said. “There’s a big disconnect between intent of message and reception of message.”

Ford said there’s also a difference between hate speech -- so prevalent on the Web -- and speech that is perceived as hateful.

“When you call something hate speech, you’re assigning intent,” he said. “What I learned from my conversations with people at Nashville is that they don’t intend harm against gay people. They don’t understand that messages that they're reinforcing are received as hateful.”

Back in Washington, the Reformation Project's pro-gay evangelical conference attracted a smaller crowd -- about 350 -- but also a lot less activity on its #TRPinDC hashtag. One reason? The conference wasn't live streamed to remote audiences. 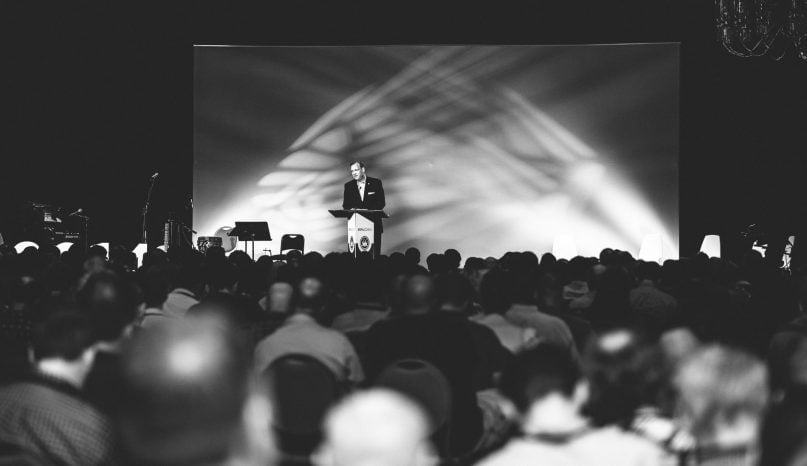 Indeed, Ed Stetzer, a veteran observer of the evangelical scene and a prominent pollster, tweeted that he was "glad to see people are (generally) not trying to troll #TRPinDC. It is a shame that so many use Twitter to twist & distort."

@edstetzer @VinesMatthew Trolling happens and is annoying. But you can't characterize all dissent as such. Most know the difference.

Matthew Vines, the young gay activist who organized the Washington conference and has gained notice for his crusade to change evangelical minds on homosexuality, said the opposition in Nashville was more personal because much of the rhetoric was focused on a person’s sexual identity. His conference, meanwhile, centered more on scriptural arguments.

“It’s easy for marginalized groups to say it’s OK to be just as vitriolic and as aggressive and uncharitable with people who have been harming them. ‘We’re the unprivileged ones,’ so people can justify things that I think should be considered more carefully,” Vines said. “Even if you are a marginalized group, that doesn’t give you free rein to do whatever you want in terms of how you interact, even if they have more power than you.”

Either way, he said, Twitter spats can serve to get more people to pay attention to the conversation.

"Robust criticism ... and having a voice is a necessary first step in eventually changing people's minds," Vines said. "For the SBC crowd, the dynamic is different. They have never not had a voice in the public square, and their views used to carry more influence in the culture than they do today."