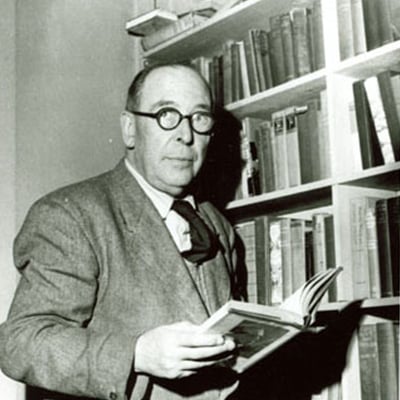 The iconic Christian author addressed the space exploration and aliens at least twice. What he believed may surprise some of his faithful fans. – (Image credit: http://bit.ly/15oZrHb)

In 1936, iconic British Christian authors C.S. Lewis (The Chronicles of Narnia) and J.R.R. Tolkien (The Lord of the Rings) had a momentous conversation in a sitting room at Magdalene College. They decided to take separate paths in their writing, and at the flip of a coin, determined that Tolkein would probe “time travel” and Lewis would explore “space travel.” Tolkein never completed his time-travel book(s), but Lewis penned a science fiction trilogy: Out of the Silent Planet, Perelandra, and That Hideous Strength.

Last week, I quoted from the second book in Lewis’ space trilogy in a column on why Christians often oppose–but should support–space exploration. Some readers who engaged with the column asked me what C.S. Lewis actually thought about space travel. I did not know for sure, but my curiosity was piqued, and I started digging.

Lewis only addressed what he thought about space exploration (and alien life) two times so far as I can find.

First, Lewis published an essay titled, “Religion and Rockets” that can be found in a lesser known book, The World’s Last Night: And Other Essays. Lewis’ faithful fans may be surprised to find that the author seems quite open to the possibility of discovering extraterrestrial life, something he believed begged a bigger question: “How can we, without absurd arrogance, believe ourselves to have been uniquely favored?” If humans did find alien animal life (he believed discovering alien plant life would be theological insignificant), Lewis said, they would need to determine if these alien beings were rational, have “spiritual sense,” and are fallen like humans are.

If all three were present in these extraterrestrial life forms, and if we discovered that no form of redemption had reached them, then the human task might be to evangelize them. Lewis suggested that it might be that “redemption, starting with us, is to work from us and through us [to the extraterrestrial beings].” He continues, “Those who are, or can become His sons, are our real brothers even if they have shells or tusks. It is spiritual, not biological, kinship that counts.”

Lewis concluded by thanking God that “we are still very far from travel to other worlds.”

The second instance where Lewis discusses these matters is in his final interview with journalist Sherwood Eliot Wirt (published in 1963). Here the author briefly shared his thoughts:

Wirt: Do you think there will be widespread travel in space?

Lewis: I look forward with horror to contact with the other inhabited planets, if there are such. We would only transport to them all of our sin and our acquisitiveness, and establish a new colonialism. I can’t bear to think of it. But if we on earth were to get right with God, of course, all would be changed. Once we find ourselves spiritually awakened, we can go to outer space and take the good things with us. That is quite a different matter.

It’s strange to hear Lewis talk of such things when one is used to reading his more practical and classic theological reflections, but Lewis’ openness is significant. It is especially so in light of many modern Christians’ opposition to space exploration and belief that alien life is theologically impossible.