VATICAN CITY (RNS) One of the largest Franciscan religious orders, founded on the humble teachings of St. Francis of Assisi more than 800 years ago, announced it is on the brink of bankruptcy after admitting some of its monks embezzled funds from its accounts. 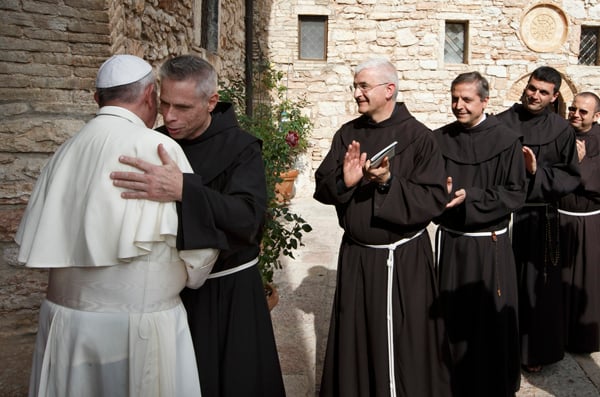 Franciscan Father Michael Perry, minister-general of the Order of Friars Minor, embraces Pope Francis during his visit to the hermitage and cell of St. Francis in Assisi, Italy, in this Oct. 4 file photo. RNS photo courtesy Paul Haring/Catholic News Service.

The Italian news magazine Panorama on Friday (Dec. 19) reported that tens of millions of dollars were missing from the Order of Friars Minor and had been invested in offshore companies.

Panorama also claimed Swiss prosecutors had seized Franciscan accounts in Switzerland because the account holders had allegedly invested in illegal operations that could include arms and drug trafficking.

Brother Michael Perry, the American head of the order, said an internal inquiry was begun in September and revealed “a number of questionable financial activities that were conducted by friars entrusted with the care of the patrimony of the order.”

In a letter posted on the order’s website, Perry said the order was in “grave, and I underscore grave, financial difficulty, with a significant burden of debt.”

The letter, addressed to all friars and published in both English and Italian, said the order’s general treasurer Father Giancarlo Lati had resigned but gave no further details.

Lati was also reportedly responsible for managing Il Cantico, a luxury Rome hotel owned by the order, whose website promises to use profits to help the poor, street kids and AIDS centers.

“Because of the scope and magnitude of these activities, they have placed the financial stability of the General Curia at grave risk,” Perry wrote.

“The systems of financial oversight and control for the management of the patrimony of the order were either too weak or were compromised, thus limiting their effectiveness to guarantee responsible, transparent management. We have initiated steps to address these concerns.”

The scandal has shaken the order inspired by its founder’s devotion to poverty and prayer. It is active in 110 countries and had more than 14,000 members.

Perry made it clear the scope of the scandal was not restricted to monks. “These questionable activities also involve people who are not Franciscan but who appear to have played a central role,” he wrote.

Francis, who instigated a massive cleanup of the Vatican bank and a shake-up of Holy See financial administration after he was elected in March 2013, has reportedly been informed of the scandal.

“We are encouraged by the example set by Pope Francis in his call for truth and transparency in financial dealings both in the Church and in human societies,” Perry said.

“I realize that many of you will be seriously disappointed and discouraged by this situation,” he said in the letter. “It will also raise many questions for which you have a right to a response.”

Perry was unavailable for comment at the order’s Rome headquarters on Friday (Dec. 19), and it was unclear whether he was in Italy.

The Order of Friars Minor is one of several branches of the Franciscan order founded by St. Francis in the Italian town of Assisi in 1209.