ISLAMABAD (RNS) The gruesome killing of 134 children in a Peshawar school has renewed concerns about Pakistan’s unfinished agenda of uprooting militancy and intolerance.

On Sunday (Dec. 21) authorities arrested several suspected facilitators, but the identities of the seven Taliban terrorists involved is not yet clear. They are assumed to be graduates of the country’s many madaris (plural of madrassa in Arabic) who wanted to revenge the Pakistani army’s ongoing military operations in Waziristan. The Peshawar school served the children of army officers.

Leaders of Wafaqul Madaris al Arabia — an umbrella body of seminaries  — condemned the terrorist act, and, after much pressure, so did outspoken Imam Abdul Aziz Ghazi, who at first refused to do so. These clerics now fear the government will crack down on the seminary system.

After the Soviet invasion of Afghanistan in 1979, religious seminaries proliferated in Pakistan with the aim of preparing foot soldiers, or mujahideen, to fight the Communists. With U.S. assistance the growth of these religious schools went unchecked as Pakistanis and youth from other Muslim countries enrolled themselves alongside the Afghans.

But there was no governmental oversight on the seminaries’ curricula and funding sources, and in 1996, then Prime Minister Benazir Bhutto discontinued a requirement that new schools register with the state. The decision led to the mushrooming of unregistered seminaries with a narrow Islamist bent. 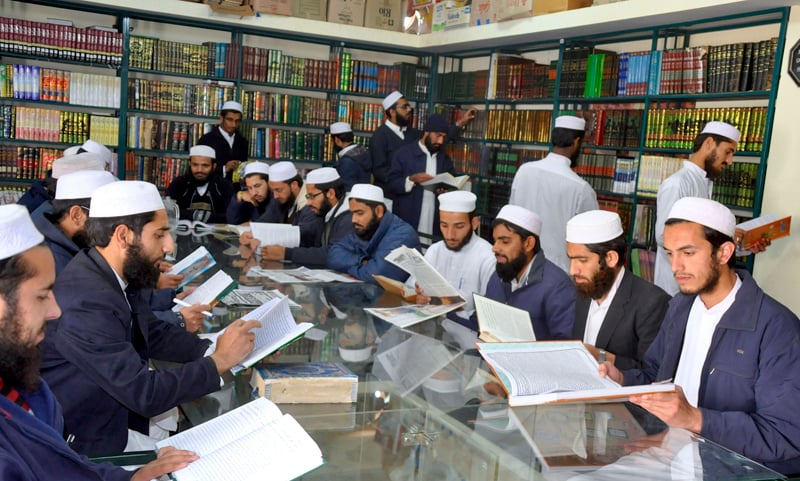 The students of Institute of Islamic Sciences in Pakistan study during a library class. Religion News Service photo by Naveed Ahmad

The Pakistani law defines religious seminaries as institutions providing boarding and lodging facilities while maktabs (junior religious schools) are institutions where students are only taught religion and the Quran in mosques.

Two attempts have been made since Sept. 11, 2001 to bring the autonomous seminaries into the mainstream. Former President Pervez Musharraf briefly reinstated the registration process and required them to submit audited financial statements along with a list of donors. But the military dictator lost his interest in reform due to political challenges from the opposition.

Through a memorandum of understanding with the umbrella organization of seminaries — Ittehad-e-Tanzeemate-Madaris — the schools consented to include compulsory science as part of the matriculation requirements. But the memorandum never became law because the government failed to produce draft legislation.

Each year, some 200,000 youth graduate from over 26,000 religious schools, according to the ministry of religious affairs.

“Mostly the madaris graduates are either jobless or employed for less than $100 monthly to work as prayer leaders,” said Wakeel Ahmad Khan, a former secretary religious affairs and an expert on seminary reforms. “They are creating jobless young people who have no career.” A seminary in the center of a middle-class neighborhood in Islamabad symbolizes uncontrolled and unregulated growth of religious schools in Pakistan. Such maktabs are mostly home to boarding students from remote parts of the country learning the Quran by heart, or the city dwellers enrolling here to learn how to read the holy book of Islam. Religion News Service photo by Naveed Ahmad

With the rise of the Islamic State, some hard-line seminaries are bracing to play a central role in a sectarian proxy war between Iran and Saudi Arabia.

“The growth of IS could result in a greater emphasis on anti-Shiite terrorism,” said Arif Rafiq, an adjunct scholar at the Middle East Institute in Washington, D.C., who studies sectarian violence in Pakistan. “And, as a reaction to this, we may see a further radicalization of the Shiite.”

But Rafiq said not all seminaries produce terrorists. And, indeed, many seminaries have opted to introduce science, math, computers and English language instruction, alongside religious instruction.

The Idara Uloom-e-Islami, or the Institute of Islamic Sciences, in Islamabad is an example of a seminary that blends religious education with secular studies. It competes with Islamabad’s elite schools. Its 10th and 12th grade students score on par with students at state-run schools.

Sprawling over a nine-acre campus that is devoid of heating and curtains in the winter, its 581 students from across the country are housed in a four-level residential block. 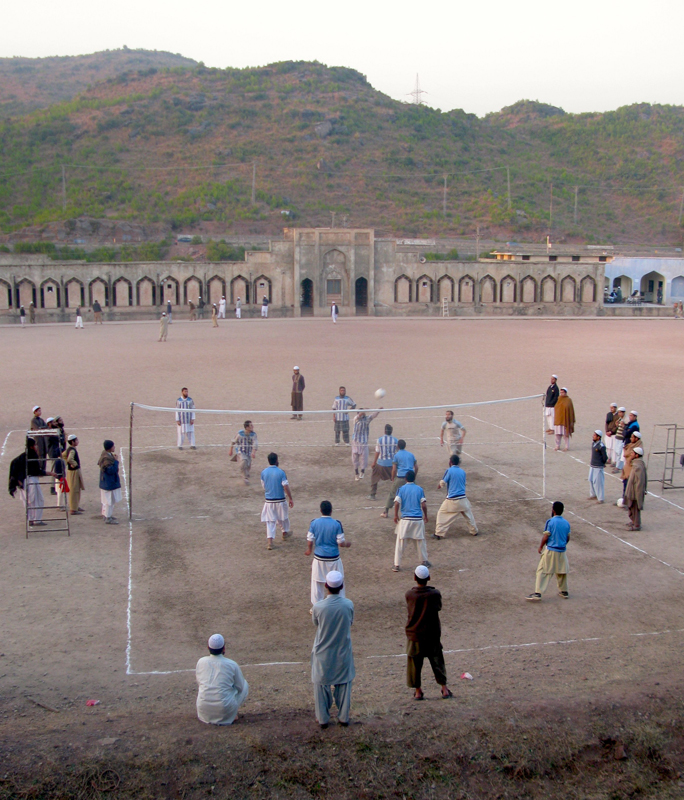 Students and teachers participate in a volleyball game at the Institute of Islamic Sciences in Islamabad. Religion News Service photo by Naveed Ahmad

“Only 17 percent of students can afford to pay our modest fee,” said Faiz-ur-Rehman Usmani, founding president of the institute. “We have to raise money for the teachers’ salaries and everyday expenses.”

The biggest challenge for the administrators has been high turnover of the teaching staff, due to low salaries and lack of facilities or subsidies.

But Abdul Ahad, an activist who grew up attending a madrassa and now advocates for reforming the system, said “training of religious teachers is as important as introduction of modern sciences, literature and arts in the curricula.”

“Extremism and intolerance is embedded in the culture and the curricula of the religious institutions, which must be replaced immediately,” Ahad said.

“The government must have a greater role in determining their curricula, quality of teachers and standard of examination by bringing then into the mainstream,” he said. “The problem, however, has been incompetence in governance and lack of political will.”

While the public mood in Pakistan is ripe for introspection and course correction at the state level, the government of Prime Minister Nawaz Sharif has yet to address the long-standing issue of soaring religious intolerance.

“Sectarianism is a long-term challenge in Pakistan,” said Rafiq, who researches policymaking in Pakistan and writes a column for Pakistan’s Express Tribune, an English-language daily. “It’s resolvable, but it requires the country’s political leaders to stand up for inter-sectarian unity and isolate agitators and terrorists who seek to deepen sectarian enmity.”